Amitav Ghosh – Mumbai could be next Fukushima – WAKEUP CALL 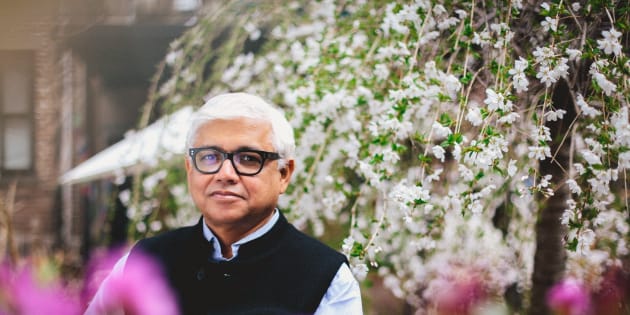 We know him as a master storyteller whose books have turned fiction into a reality that has entered the lexicon of our lives. The Hungry Tide, The Glass Palace… these and other epic stories have presaged his passage to a non-fiction book that reads almost like the paced narratives of his best stories. Indeed, the setting of the Hungry Tide — in the Sunderbans — was eerily prescient: an island that submerged here a few years ago marked the beginning of an exodus of climate refugees from the delta. In the highest tradition of mystic storytellers, then, Amitav Ghosh’s fiction has become fact.

The Great Derangement: Climate Change and the Unthinkable, published this week by Penguin Random House India, is a searing cry from the heart to act upon the gathering climate crisis. Ghosh forced me — someone who has worked on climate mitigation and disaster risk reduction projects with the World Bank for years — to step out of the development-and-energy prism of my work and look at climate change in its totality, as a broadly cultural phenomenon.

“Let us make no mistake: the climate crisis is also a crisis of culture, and thus of the imagination… Culture generates desires — for vehicles and appliances, for certain kinds of gardens and dwellings –that are among the principle drivers of the carbon economy.”

And yet climate change, far from being the dominant narrative of our time is barely reflected in mainstream literature (as opposed to science fiction), depictive or performing arts, music, architecture (save a few “green” dwellings) or our agricultural and consumption processes. How do we explain this conspiracy of silence? This is what Ghosh calls the “grand derangement”.

Climate change, far from being the dominant narrative… is barely reflected in mainstream [culture]. How do we explain this silence? This is what Ghosh calls the “grand derangement”.
A writer whose facility with words is matched only by the depth of his domain knowledge, Ghosh shows how culture is shaped by history, technology and the forces of dominance that have left the once-colonized world comparatively disempowered to deal with the crisis. In this sense, disrupting the status quo by changing energy consumption patterns threatens the current distribution of global power.

“In short: the rich have much to lose; the poor do not. This is true… (of) the developing world, where the urban middle classes have a carbon footprint that is not much lower than that of the average European.”

Could Mumbai Be The Next Fukushima?

While the big themes of capitalism, social justice, progress, religion and the vision of what constitutes a good life are all part of Ghosh’s examination of our impact on the climate, of more immediate concern to readers is his stark description of the impact of climate change in Asia. This, after all, is a continent which already suffers the biggest impact in terms of sheer numbers and one which is also accelerating the pace of that change.

Take for instance Mumbai, home to 20 million inhabitants, the second largest municipality in the world. Having escaped the wrath of a devastating cyclone for a century, it exhibits a complacency belied by new research of increased cyclonic activity in the Arabian Sea. Should a category 4 or 5 cyclone hit India’s financial and commercial capital, the impact would be catastrophic– particularly in South Mumbai, a low-lying tongue of reclaimed land.

“A distance of about 4 kilometres separates south Mumbai’s two sea-facing shorelines. Situated on the east side are the city’s port facilities, the legendary Taj Mahal Hotel, and the plaza of the Gateway of India, which is already increasingly prone to flooding. Beyond lies a much-used fishing port: any vessels that had not been moved to safe locations would be seized by the storm surge and swept towards the Gateway of India and the Taj Hotel.

“At this point waves would be pouring into south Mumbai from both its sea-facing shorelines; it is not inconceivable that the two fronts of the storm surge would meet and merge. In that case the hills and promontories of south Mumbai would once again become islands, rising out of a wildly agitated expanse of water. Also visible above the waves would be the upper storeys of many of the city’s most important institutions: the Town Hall, Vidhan Sabha, the Chhatrapati Shivaji Railway Terminus, the towering headquarters of the Reserve Bank of India and the skyscraper that houses India’s largest and most important stock exchange.”

Worse, the city is one of the few megapolises in the world to have nuclear reactors within its precincts so the possibility of a Fukushima-like situation developing cannot be ruled out as an interview with nuclear safety expert M.V. Raman explains in some detail. Are we prepared for this?

India As The Earth Warms

“Asia is conceptually critical to every aspect of global warming: its causes, its philosophical and historical implications, and to the possibility of a global response to it,” says Ghosh. For Asia has already shown that Western patterns of consumption are unsustainable. Already, the density of its population and poverty-related vulnerability accounts for a disproportionately high number of natural disaster victims. According to a recent UN report 91% of global natural disaster deaths are in Asia-Pacific.

“In India a significant rise in sea level could lead to the loss of some 6000 square kilometres, including some of the country’s most fertile lands; many of the subcontinent’s low-lying islands, like the Lakshadweep chain, may disappear. One study suggests that rising sea levels could result in the migration of up to 50 million people in India.”

Ghosh warns that water shortages from melted glaciers will turn 24% of the country’s arable land into desert, affecting a quarter of our food production.

“The rivers that sustain China and South and Southeast Asia rise in Tibet and the Himalayas; the waters that are stored there, in the form of accumulations of ice, sustain 47 per cent of the world’s population: ‘here the water-related dreams and fears of half the human race come together’. But this region is warming twice as fast as the average global rate, and in 2008 it was found that the Himalayan glaciers had already lost all the ice formed since the mid-1940s; by some reckonings, one-third of them will disappear by 2050.”

Those who have read IPCC reports and other studies will be no strangers of these facts but they seem to be just that — facts we read in books and listen to on TV debates but fail to act on for a variety of reasons. Indeed, climate change deniers — funded by oil MNCs like Exxon — are finding a new lease of life with the promises of Donald Trump to rescind the historic Paris COP agreement should he become President.

When The Pope and Presidents Came Together

Towards the end of his book, Ghosh shines a ray of light. While 2015 was the hottest year on record with a number of El Niño related weather events, it was also the year that produced two texts of seminal importance for climate change. The first, Pope Francis’s encyclical letter, “Laudato Si’“, was published in May; while the second, the Paris Agreement on climate change, appeared in December. Ghosh places faith in the power of religion to mobilize public opinion with a speed that environmentalists cannot match. He is tongue in cheek about the Paris document with its self-congratulatory euphoria, compared to the sober text from the Vatican which talks about poverty and justice in a way studiously avoided by the COP agreement.

“The (COP) Proposal continues, covering eighteen densely printed pages: yet this large block of text, with its 140 numbered clauses and six sections, consists of only two sentences, one of which runs on for no less than fifteen pages! Indeed this part of the Agreement is a work of extraordinary compositional virtuosity–thousands of words separated by innumerable colons, semicolons, and commas and only a single, lonely pair of full stops.”

These then are the weapons we have to address one of the biggest challenges of our age …they are inadequate and they presage a world where climate disasters are inevitable. A bitter legacy says Ghosh:

“When future generations look back upon the Great Derangement they will certainly blame the leaders and politicians of this time for their failure to address the climate crisis. But they may well hold artists and writers equally culpable–for the imagining of possibilities is not, after all, the job of politicians and bureaucrats.”http://www.huffingtonpost.in/prabha-chandran/could-mumbai-be-the-next-fukushima-amitav-ghosh-thinks-its-pos/

‘Go back to your own country!’: Washington Sikh man shot during racist attack
'EU-India Free Trade Negotiations Threatening Access to Medicines'
India -Double dilemma of the Dalit Sikhs of Shillong #mustread
Woman Beaten to Death for Refusing to Give Men Her Number #Vaw #WTFnews