Amravati, A grave in making for farmers, dalits, adivasis

by National Alliance of People’s Movements 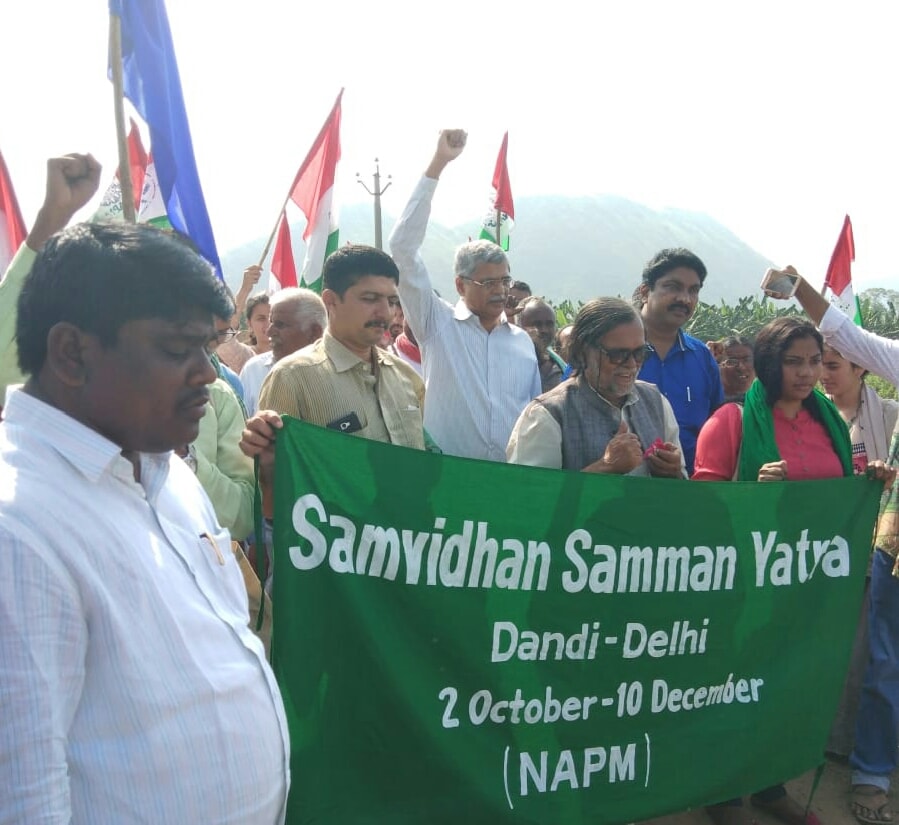 Multiple Power Project along the coastline, rapid urbanization, industrial pollution driving away fish population from the coasts in Andhra Pradesh; Sagarmala and Industrial Corridor responsible for the devastation

The whole vision of making a Capital City by the CM Chandrababu Naidu has devastated the agriculture in more than 29 villages in the name of development. The Shivram Committee recommended to set up Capital either in decentralized manner or in Rayalseema. However, Chandrababu Naidu, rejected the report and decided to go ahead with Amaravati Plan with a promise to make the city like Singapore. This obsession with western model of development have threatened the indigeneity of the area.

Acquisition of more than 50 thousand acres of land for the Capital City through coercive “Voluntary Land Pooling” left little option with the cultivators of the region. The benefits of Consent and SIA provisions of central land acquisition act, 2013 remained distant for the people. From transparency to public hearing, everything was just bypassed to silence any voice raised against the acquisition. After Land pooling, no farmers are allowed to cultivate the land even when no work started on the land.

Not learning from the devastation of Chennai flood, Amravati also seems to be following the foot steps of Chennai and encroaching on water bodies. It is the irony in the country that Real Estate sector and businesses are being given priority on top of environment and people of the largest democracy.

Yatra reached Undavalli, the first village in the Yatra route. Activists taken out rally starting from the fields of Undavalli, where a large number of farmers joined them. This shows the discontent which is suppressed since long by the state government. According to representatives of Rythu Swaraj Vedika, there are 120 documented different crops being cultivated in the region. The area is famous for its rich fertile soil which supports 4 or more crops at the same time.

Nidamarru was the second village visited by the Yatra. “On one acre of land, fifty people are dependent on an average ranging from the families of cultivators to small scale traders. An agricultural worker can earn Rs 200 – 400 on a daily basis in the region. What will we do when dispossessed our land and livelihood. The Govt. gave us false promises like providing free education and health services in the name of development but we cannot see anything till now”, said Naji Reddy, a farmer from the village.

“We are farmers and we only know how to cultivate our land. No amount can compensate loss of our life long livelihood and basis of Right to Life. Money will be finished and we all will be left with no choice but to work as a worker in the factories where industries will rule our lives. If government and chief minister of Andhra Pradesh wants us to give up our land and livelihood, they should also be ready to give up their seats. They don’t deserve to represent us anymore.”, said Jayamma, a woman farmer from the village. Activists expressed strong solidarity to their struggles and moved towards third village, Lingyapalem.

Public meeting was organised in Lingyapalem village by local community leaders and villagers. They shared that the state government is hell bent on acquiring land and driving out everyone including original inhabitants of the land. It is nothing but an injustice with adivasi, dalits, and landless workers.

Bhupendra Rawat from Jan Sangharsh Vahini said that the NAPM rejects the Land Pooling Scheme which encourages land mafia to grab more and more land and transfer all to industries and rich. Government is aware about it and they are equally hand in gloves with them.

“Women need to be at the fore front of the struggle to push back the government and continue their struggles for protecting their land and livelihood”, said Kamla Yadav from Narmada Bachao Andolan.

“Monetizing such fertile land is a blunder by the government which is being done through Voluntary Land Pooling Scheme. It is an inter-generational resource and cannot be compensated by any means”, said Sudha from Sangatin Mazdoor Kisan Sangathan, Uttar Pradesh

Representatives from Dalit Community said that they have been living here for more than centuries. But the government have not been able to extend any benefits as they are providing to other farmers. The police continue to harass them and use coercion to part away from the land. Chandrababu Naidu pretend to stand against the Central Government on Dalits issues but fails people from the same community in his own state.

The rehabilitation policy framed cannot be more castiest and unconstitutional. People from dominant castes are receiving higher compensation while dalits are getting lower. Even among dalits, there is hierarchy. It stems more from the discrimation at policy level between the Assigned Land and Patta Land which is prohibited in the central land acquisition act of 2013.

After Amravati, Yatra reached to the public meeting in Ongole which was organized by Democratic Traditional Fishworkers Forum, APVVU, and State Yanadi Union.

Bhupendra Singh Rawat introduced the activists travelling with yatra to the people of the public meeting and said that now the ministers in the Government have come openly in public against the Constitution and we cannot let them destroy it. We resolved to fight against this and are travelling across the country making people aware about the intentions of BJP Government.

“The foremost problem of Andhra Pradesh is the proposed construction of 18 new ports and large number of power plants being commissioned around ports on the 760 kms long coastline of the state. All this is being done under Sagarmala and Industrial Corridor projects.”, said Pal from DTFF. The access to the coast is being systemically restricted for the fisherpeople. They are being forced to abandon their fishing practices and become migrant workers in their own state.

“We are unable to go for fishing as the rising urban population due to rapid urbanization around coasts and urban pollution are killing the fish population”, said A. Subharav, a fisherman.

Kati Padma and Vijayamma from Yana Community reflected on issues faced by their community due to social boycott and lack of basic housing facilities. They demanded one acre of land for each family under the land reform initiatives.

“The CRZ norms are being violated. The police officials brutally treat protesting fisher people. People are being killed and their bodies were taken away by the police forces.”, said K. Subharao, a teacher from the community.

Madhuresh Kumar from National Alliance of People’s Movements expressed solidarity with the protest against shipping corridor organised by National Fishworkers Forum along the coastline.

Parth from Paryavaran Suraksha Samiti, Gujarat described Sagaramala as an attack on fisher community across India and said that we need to stand together and fight against their attempt of selling off land, forests, rivers and coasts to industries and corporates.

For details about Samvidhan Samman Yatra, check our website www.samvidhanyatra.wordpress.com

We are standing at crossroads and passing through a critical juncture in India’s history and have a historical responsibility to save and salvage the ethos of this country, to fulfill the dreams of social, economic and political justice that Dr. Baba Saheb Ambedkar envisioned. There is an overwhelming urgency to come together, beyond diversity of perspectives, to safeguard the constitutional values and principles of humanity, based on social justice, liberty, equality, fraternity, scientific and rational thinking in the social psyche to deal with all these political, economic, social, cultural challenges. The need of the hour is to create understanding and tolerance in society, by peaceful, democratic and constitutional means. It is equally vital to aim for economic equity, social parity, environmental protection, sustainable development, establishment of people’s rights over access of resources and annihilation of caste and patriarchy.

It is with this urgency and spirit that National Alliance of People’s Movements (NAPM) has, after numerous discussions, planned to embark on a Samvidhan Samman Yatra – a nationwide tour to restore and protect the core values of our Constitution and democracy, at a time when there is an all-out attack on the Constitution, people’s rights, livelihoods, environment and the spirit of diversity in the country, even as massive scams, resource loot and dilution of laws are taking place and farmers, workers, students, employees, women, dalits, adivasis, muslims all are on the streets asserting their rights, spaces and freedoms.

Yatra shall travel more than 25000 Kms through 26 states in 65 days holding meetings, discussions, public events, supporting struggles, sharing grief of victims of the violence and hate and spreading message of plurality, love, peace and social justice. The Yatra shall culminate in a Manvadhikar Rally and Jan Sansad in Delhi on 10th December, 2018, the International Human Rights Day.