An Appeal to Chief Justice of India – #Freehadiya 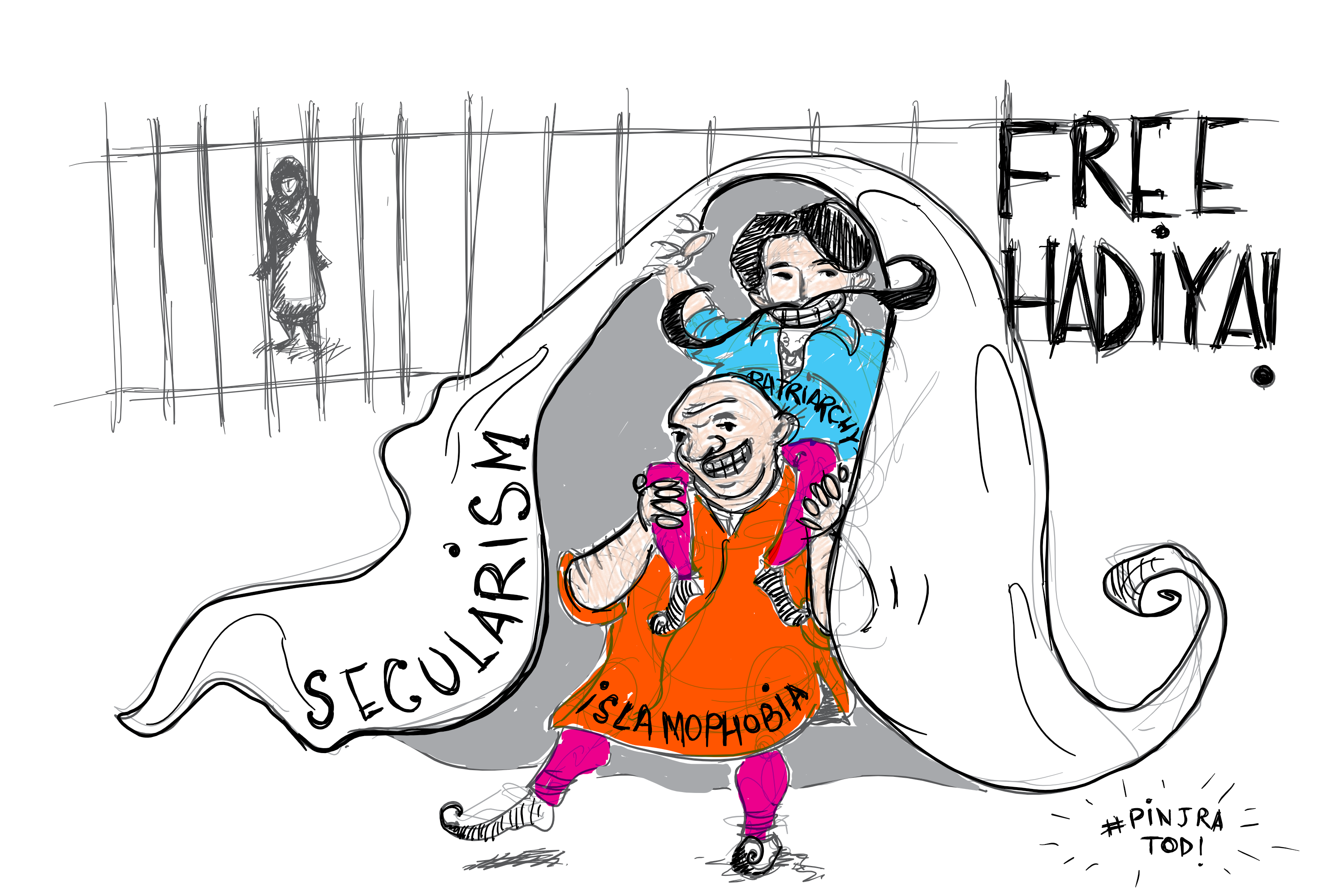 We write to you, to bring to your notice a recent judgement of the Kerala High Court which has annulled a consensual marriage of an adult Muslim woman. The judgement also makes many other remarks which can completely undermine any claim for equal citizenship for women and are violative of their fundamental and constitutional rights. Hadiya is a young woman, 24 years of age who has went on record to say that she willingly converted to Islam. Her parents have since approached the court twice asserting that she has converted to Islam under external force, demanding that she return to living with them. In their second petition to the Kerala High Court they also raised the allegation that she would be transported outside the country and demanded the court’s intervention.

During the proceedings of the second petition, Hadiya contracted a marriage with a Muslim man according to Islamic rites and rituals and stated her full consent in the marriage. The Kerala High Court has finally annulled the marriage and forced Hadiya into the custody of her father. She has not even been allowed a phone and has been denied any contact with the rest of the world beside her parents, in effect putting her under house arrest for no proven crime committed by her. Policemen guard her every day and just beyond stand RSS cadre further ensuring that their prize catch finds no exit from the situation. On the judgement being challenged in the Honourable Supreme Court, the apex court ordered an NIA (National Investigative Agency) enquiry into the marriage, framing the whole case in terms of counter terrorism proceedings and completely bypassing concerns around the judicial recognition of women’s agency and the violation of women’s constitutional rights.

“IN HER BEST INTEREST” – A JUDICIAL PRECEDENT OF INFANTILIZATION OF WOMEN

The absolute denial of a voice to Hadiya by the Kerala High Court is a matter of grave concern, beginning from the court forcing her to live in a women’s hostel under surveillance to the annulment of a consensual marriage on grounds of coercion, despite an adult woman making a clear statement of her consent. The judgement states that ‘as per Indian tradition, the custody of an unmarried daughter is with the parents, until she is properly married’, and that Hadiya, being ‘a female in her twenties is at a vulnerable age’ and cannot understand what is good for her. The judgement expresses unabashed incredulity towards the statements made by Hadiya about her choice to convert to Islam, her interest in the study of religion and her choice to practice a religion different from her parents.

The court continues to address Hadiya as Akhila, a name she has surrendered, and refuses to acknowledge her decision to practice Islam. Most dangerously, the judgement throughout assumes that a father can judge the best interest of an adult daughter. The court only sees her as “indoctrinated and influenced” Akhila who is not to be left “free to decide what she wants in life”, who is not “capable of taking a firm and independent decision on her own” – who hence needed to be “rescued and handed over” to the “safe hands” of “parental authority”, to ensure that she is “protected” from “going astray”.

The Kerala HC goes on to assume a ‘parens patriae’ jurisdiction over Hadiya, i.e. the position of guardianship over her, which is available only in the case of minors or those considered of ‘unsound mind’ or who are ‘incompetent to understand their own interest’ and is completely unjustified and demeaning when applied to an adult woman.

All its utterances put together the HC judgement in this case exemplifies the submission of women’s agency and interest before ‘other’ ‘larger’ concerns. Women’s bodies have across history been made into battle fields for such ‘other’ ‘larger’ battles, those of cultural hegemony, religious and political domination, the formation and dissolution of nations and not least the establishment and demolition of (a country/ community/ family/ lover’s) honour.

The present judgement of the Kerala HC takes us back to the point where a woman was at best the property of her male kin and her body the repository of the ‘honour/interest’ of the country/community.

It is indeed incredible how a court which everyday hears hundreds of cases of domestic violence and abuse, of ‘honour killings’ and dowry deaths could repose such blind faith in the institution of the ‘family’, to consider “the welfare and well-being” of their daughter “to be of paramount importance”. ‘Females in their twenties’ are full citizens of this country, who work, vote, study, own property and like all other citizens have a fundamental right to be treated as equals before the law.
They must be recognized to be capable of discerning between the good and bad, must be allowed to exercise their discretion in matters concerning themselves and presumed to be capable of bearing the implications of those decisions. The denial of any independent decision-making capacity to such a huge section of the population as implied by the Kerala HC is unacceptable. It runs counter to the entire history of women’s struggle to gain social-political-economic independence and shall only exacerbate the vulnerabilities that we face as women in a patriarchal society.

PATRIARCHY RIDING ON THE BACK OF ISLAMOPHOBIA?

Clearly, the issue in the present case is not the well-being of Hadiya but what the HC records as “the widespread allegations of forcible conversion that were coming up and the national interest that is at stake”. The HC has so undermined Hadiya’s agency, only to address its anxiety around “conversion by radical groups… working in various parts of Kerala influencing young girls from other communities and forcibly converting them to the Islamic faith’. Is it that the choices Hadiya has made – of converting out of her parent’s religion as a young woman, and of converting from Hinduism into Islam – are so unacceptable to the court, so disturbing for the dominant patriarchal Hindu order that they must be overturned, even at the cost of going against the constitution’s mandate and compromising the rights and autonomy of all young women?

The present political situation is marked by increasing polarization on communal lines, a rapid escalation in the viciousness, impunity and public assertion of violence against the Muslim community and the permeation of Hindu fundamentalism into state structure and society. In such a circumstance, the invocation of the framework of terror by the courts in this case must be judged in the backdrop of Muslim youth accused in terror charges being acquitted after spending years in jail due to inadequate evidence. The HC has justified all instances of overreach in Hadiya’s case citing concern over “forced conversion” to Islam, even as the state has remained silent on campaigns such as “Bahu Lao Beti Bachao” and “Ghar Wapasi”, very much campaigns of forced conversions into Hinduism. Such selective concern suggests that a prejudice is at work against Hadiya due to her being a Muslim woman. The judgement therefore seems to be inflicted by patriarchal presumptions riding on the back of Islamophobia.

As a collective of women students, what is happening to Hadiya is not new to us, many of us have experienced such violence and caging very closely, by this society, by our families, by the state, by universities, by partners and lovers we had ourselves chosen – the list is endless. Many of us stay in private and university hostel accommodations. A diverse set of discriminatory rules and regulations, beginning with the ‘curfew’ are imposed by such institutions on women students to control and regulate our lives and decisions in the most intrusive and arbitrary ways, to ensure that we have no opportunity to go “astray”. Educational institutions across the country see themselves as accountable only to the parents of adult women and not to the adult women themselves.

The fact that the Kerala HC decided to put Hadiya in a women’s hostel to make sure that she was under strict surveillance only further illustrates how these hostels often play the role of being the transit house for young women from the homes of their fathers to their husband’s. However, over the past few years, young women across the country have taken to streets in hundreds and thousands to fight against such surveillance. The Kerala HC judgement is a huge blow to our confidence in the judicial process and its safe guarding of our constitutional rights, even as we are now finally beginning to gain victories in changing the perception of women and even these institutions on the question of autonomy and surveillance of women.

The HC has expressed concern over Hadiya not impressing them “as a person who is capable of taking a firm and independent decision on her own” alleging that the marriage they annulled was contrived to tie the hands of the court. However, the present judgement itself offers a ‘proper marriage’ as the only means through which a woman can leave the custody of her parents. Such an approach only further undermines women’s capacity for taking ‘independent decisions’, forces us into relations of dependence and makes us ever more vulnerable.

We request you to hear Hadiya, to hear the thousands of young women who have struggled so hard to challenge such silencing of our voices. Our best interests lie not in such infantilization, such surveillance, such caging and silencing. Instead, it lies in a full recognition of our rights and autonomy and the creation of a violence free and equitable society for all. We may have never met Hadiya, but her struggle is intimate to us! If the women of this country are to have any ounce of faith restored in the judiciary, Hadiya’s illegal house arrest and denial of agency must be immediately revoked.