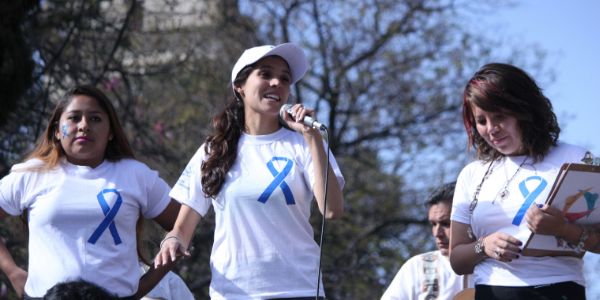 Brisa didn’t get justice when she was raped as a teen. Now, almost 20 years later, her case could set a legal precedent in Bolivia and for the Americas.

– Statement from the Inter-American Commission on Human Rights on 17 July, 2020

When Brisa was fifteen  she was repeatedly raped by her adult cousin who was living with her family at the time. After eight months of sexual and emotional abuse, Brisa told her parents what she had been enduring. While they were immediately supportive and believed Brisa, others in her family and community were not as empathetic.

Many in Brisa’s community and extended family blamed her and were mad that her family was seeking justice against her rapist. They argued that by bringing her case to trial, Brisa would “bring shame” to the family name since the abuse was perpetrated by a family member. During this time, Brisa attempted suicide twice, and her family home was stoned and set on fire.

Despite these intimidation tactics, Brisa’s case made it to criminal trial. However, the judge and prosecutor painted Brisa as complicit in her own abuse. The judge even implied that Brisa couldn’t have been raped because she didn’t scream and the prosecutor tried to make her feel guilty for potentially ruining her abuser’s life if he was sent to prison.

In all, Brisa endured three trials in Bolivia but her rapist has yet to be held accountable for any of his crimes. The inability to access justice through the Bolivian legal system led Brisa to file her case before the Inter-American Commission of Human Rights (IACHR).

The Case so Far

After Brisa filed her case before the IACHR in 2012, the Bolivian State has had many opportunities to improve its laws and practices.

On multiple occasions, the Government of Bolivia committed to work with us to amend its penal code – and a process was started to approve a new set of laws to incorporate many of our recommendations. However, the government has yet to fulfill its pledge, and some of the most problematic aspects of the penal code remain in place.

On 17 July 2020, the Bolivian Government reached the end of the road with the IACHR. The Commission was not convinced by Bolivia’s repeated attempts to persuade them that they were complying with their recommendations, and decided to refer Brisa’s case to the Inter-American Court of Human Rights (IACtHR). In the merits report, the Commission made the following recommendations:

Why a Referral to the Inter-American Court is so Important

A case being referred to the Inter-American Court is not a minor procedural step; it can have far-reaching impact. The State in question must abide by the ruling in the case, and implement the changes required of it. This means that thousands of young and adolescent girls in Bolivia stand to benefit from a positive outcome, with stronger protections of their right to be free from violence, and improved access to justice. But it also has implications far beyond Bolivia. A positive outcome in this case would set a legal precedent throughout the Americas, which all member States would be held to, thus improving the lives of girls and women throughout the Western Hemisphere.

Unfortunately, Brisa’s experience is not unique. Bolivia has the highest rates of sexual violence in Latin America , with 70% of women reporting that they have experienced physical or sexual abuse in their lifetime. Despite these shocking figures, survivors of sexual violence and abuse face often insurmountable barriers when trying to access justice in the country.

Like Brisa, many survivors have been victim-blamed and threatened into keeping silent and not reporting the crimes. Many internalize the trauma they experienced and suffer mental and physical health consequences as a result.

For those cases that do make it to trial, many plaintiffs are revictimized by the process. As Brisa experienced, judges, medical examiners and lawyers replicate tropes of victim blaming and question the veracity of survivors who come forward.

The law itself is also an obstacle to justice, since the Bolivian penal code states that for a crime to be considered rape, victims must prove violence or intimidation, not simply a lack of consent. Again adolescent girls are at a disadvantage, since there is an additional law, estupro, which lowers the punishment for raping a girl between the ages of 14-18, as compared to younger girls or adult women.

Despite the government’s commitments to implement our recommended changes to the penal code, the estupro article remains in place, as does the requirement for sexual assault survivors to prove intimidation or physical or psychological violence. Nor is there any definition of consent in the law.

A ruling will take some time – Inter-American Court cases usually take several years – but Equality Now will continue as part of Brisa’s legal team, and meanwhile, other work to end sexual violence is not stopping. In Bolivia, young people are leading the effort: on 15 July 2020, the Red de Niñas, Niños y Adolescentes Contra la Violencia Sexual conducted an online panel discussion  bringing together lawyers, youth advocates, survivor service providers, and government officials, which attracted thousands of viewers and generated lively discussion around what can and should be done by the government to address their concerns.

In August, for the annual National Day of Solidarity with Victims of Sexual Assault and Against Sexual Violence Against Children and Adolescents  they’ll be taking their demands straight to the authorities with a series of public speeches and protests, as well as performances by well-known musicians – all online.

Equality Now has been and will continue to be with survivors and advocates in Bolivia every step of the way, supporting the creation of a national coalition against sexual violence , their campaign activities, amplifying their voices, and bringing their concerns to the international community.

So much change is needed, but activists are unstoppable, and the IACtHR taking up this landmark case is a critical next step in ending impunity for sexual violence in the region.