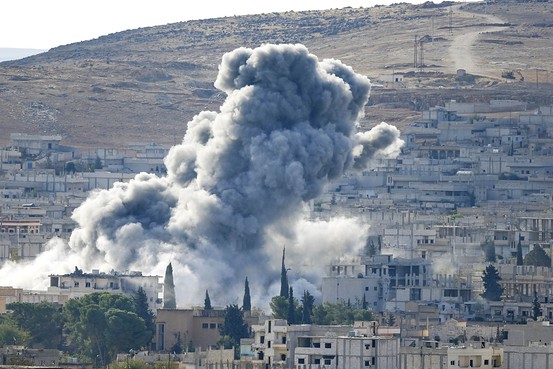 Smoke rises from the Syrian town of Kobani, seen from near the Mursitpinar border crossing on the Turkish-Syrian border, on Oct. 15.

Two months after its first airstrikes against Islamic State, Washington has finally named its latest military operation in the Middle East. The delay was curious. Maybe it was hard to come up with a title that embraced the massive but amorphous nature of this novel intervention against Islamic State, an extremist movement (also known as ISIS or ISIL) that has gobbled up vast chunks of Iraq and Syria.

The choice–”Operation Inherent Resolve”–has both a loneliness and a longness about it, and even a sadness. It reflects both the dashed hopes of the past and the distance anticipated before future gains. It doesn’t inspire a lot of confidence either. Indeed, it almost sounds despondent.

Operation Inherent Resolve also stands in stark contrast to the more optimistic names of the past three U.S. wars in the Middle East and south Asia: In 1991, the United States launched the robust-sounding Operation Desert Storm to oust Iraq from little Kuwait. Operation Enduring Freedom in Afghanistan, launched in 2001, had an idealistic ring to it, especially as a response to the 9/11 attacks. In 2003, Operation Iraqi Freedom was supposed to signal the creation of a new democracy after the toppling of a notorious dictator.

All three of those operations were messier and longer than anticipated. They also had unintended consequences that deferred or muddied straightforward U.S. goals. The military moniker for this newest battle reflects those realities.

A communique issued Wednesday by U.S. Central Command, which is running this operation, explained the choice:

“The name Inherent Resolve is intended to reflect the unwavering resolve and deep commitment of the U.S. and partner nations in the region and around the globe to eliminate the terrorist group ISIL and the threat they pose to Iraq, the region and the wider international community.  It also symbolizes the willingness and dedication of coalition members to work closely with our friends in the region and apply all available dimensions of national power necessary–diplomatic, informational, military, economic–to degrade and ultimately destroy ISIL.”

Whatever the outcome, there are clearly fewer illusions about what it may take to win–in almost any form–this latest war.

Robin Wright is a joint fellow at the U.S. Institute of Peace and the Woodrow Wilson International Center for Scholars. She is on Twitter: @wrightr.

#India - Do you know what is the cost of UID ? and who Benefits ? #Aadhaar
UN Begins Talks on World’s First Treaty to Regulate High Seas
Noam Chomsky: What I'd like to see on front pages of newspapers #Sundayreading
Odisha - State foisting cases on innocent people’