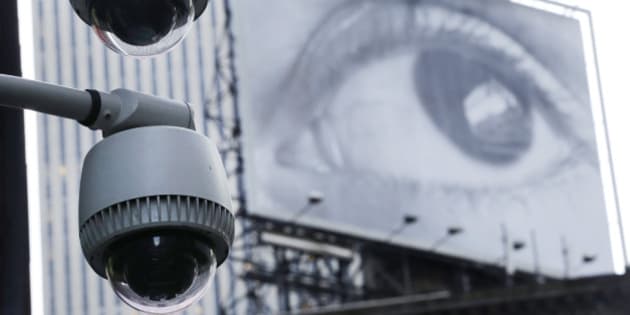 AP
Security cameras are mounted on the side of a building overlooking an intersection in midtown Manhattan. In the background is a billboard of a human eye. (AP Photo/Mark Lennihan)

VIJAYAWADA, Andhra Pradesh — Across the hall from Chief Minister Chandrababu Naidu’s office in the Andhra Pradesh Secretariat is a windowless room with giant wall-sized screens that display the intimate personal details of 43 million of the state’s 50 million residents: GPS coordinates of their homes, the medicines they use, the food rations they eat, what they say about the Chief Minister on their social media accounts, real-time feeds of thousands of security cameras (with some cameras inside people’s homes – voluntarily, of course), their castes and sub-castes, their religion, their student scholarships and old-age pensions, their movement in every state ambulance, and of course — their Aadhaar numbers.

Welcome to the dawn of “Sunrise AP 2022” — Naidu’s ambitious, and unnerving, vision of a society governed entirely by a giant, searchable database, called “e-Pragati”, that integrates all the information, held by every government department, about every resident in AP using their e-KYC authenticated Aadhaar numbers.

This data can be instantly pulled up on the displays in control-room, opposite Naidu’s office, called the Real Time Governance Centre (RTGC). In here, a gaggle of geeks sit at about 40 terminals, ceaselessly monitoring government programmes in an attempt to improve efficiency, eliminate wastage, and ensure that every welfare programme targets its intended beneficiary. Earlier this month, HuffPost India was granted access to this room to witness real time governance in action.

Even as the Supreme Court mulls the legality of the Aadhaar project, and the BN Srikrishna Committee seeks to evolve a data protection framework for India, state governments are racing to gather as much citizen data as possible. Andhra Pradesh is not the only state creating such detailed databases — it is merely the most successful.

Worryingly, a system of this scale and complexity has been built without any public debate or discussion whatsoever.

Government officials said that integrating databases, and verifying them using Aadhaar, has improved the efficiency of government schemes. However privacy experts note — and HuffPost India can reveal — that the very same systems intended to improve governance can be used to harvest previously unimaginable amounts of data about their residents to build a perfect surveillance state.

Today, ministers in AP can use the Real Time Governance centre to see live data on just about everything happening in the state, with people’s identities confirmed through Aadhaar-based eKYC.

“People saying, ‘Hey, this great, this is a cool idea, we can link this — we can do this, we can do that.’ That’s dangerous, because it does not apply the test of intent,” said Vasant Dhar, a data scientist and professor at the Stern School of Business and the Centre for Data Science at New York University.

“I wish I could tell you that this wasn’t alarming,” said Mishi Choudhary, Managing Partner at Mishi Choudhary Associates. “In the absence of a Data Protection Framework or jurisprudence on data collection and usage by state parties in the name of efficiency such practices continue.”

If the principles set out in the early drafts of the Srikrishna Committee’s report make it to final document, Choudhary said, “the AP authorities will have to engage in large swaths of destruction of data collected unless exempted categorically.”

For now, state officials are scooping up vast stores of data at a frenetic pace and deploying it at every opportunity.

In 2016 Andhra Pradesh began a project called the Praja Sadhikara Survey, or Smart Pulse Survey. This survey, which continues to this day, is an on-going effort to compile and verify the details of every person resident in AP. Every day, government surveyors armed with inexpensive Android-powered tablets kitted out with fingerprint readers fan out across the state to knock on doors and gather “socio-economic data” which ranges from demographic data such as age, gender, religion, and caste and also annual income, education, personal vehicles etc. They note about the GPS coordinates of homes, and upload all this data to the e-Pragati portal, which then makes its way to the screens in the Chief Minister’s office

Forty three million residents have already been enrolled in the system, of which 33 million records have been verified using Aadhaar based eKYC.

“A lot of the data that you see here comes from the Smart Pulse Survey,” an engineer at the RTGC confirmed. Senior officials were not available for comment, but engineers explained the workings of the centre.

“We also have data from IoT devices in the field, like ground water level detection, and temperature data, and we work with different departments to get data on education, lighting, all different things,” an official at the Real Time Governance centre said, pulling up information on every street light in Vijaywada.

“You can see the lights as they come on, so right now because it is the daytime you will see that most of these are marked as off, and once they switch on, you can see the icon change,” he explained.

Experts question AP’s head-long quest to gather, tabulate, and process every stray datum in the state.

Abraham also questioned the need for each department to create online dashboards that made it trivially easy for any government officer to obtain detailed personal records on individuals. Till recently, many of these dashboards, as HuffPost India reported, were left open to the public.

“There seems to be a Star Trek type obsession with dash-boards which results in massive data collection and centralization of personal data,” Abraham concluded. “This is a huge security risk.”

The proliferation of these dashboards, privacy experts say, reveal how Aadhaar numbers compromise the privacy of citizens.

“You can take a unique identifying number and use it to find data in different sectors,” explained Pam Dixon, Executive Director of the World Privacy Forum, an American public interest research group. “That number can be cross-walked across all the different parts of their life.”

AP’s Real Time Governance Centre reveals how citizens can be profiled in granular detail by simply cross-walking their Aadhaar numbers across departmental databases.

Cameras inside your house

One of the giant screens in the Real Time Governance Centre is a live-stream of the state’s network of surveillance cameras called the Professional Surveillance System. The system has 4000 cameras at the moment, but engineers said they hoped to scale up to 20,000 cameras soon.

“Right now we are targeting intersections, areas with crime problems, any place where it will have a benefit on the public,” an engineer said.

But those aren’t the only cameras monitored by the Professional Surveillance System.

The AP police’s Locked House Management System (these are all actual project names) offers security to people going on vacation by installing video cameras inside the homes of private citizens.

“Before you leave, you just call the police, and they install these cameras in your house,” the engineer explained. “These are motion cameras with night vision, so if someone breaks into your house, an alert will be sent out, and the police will take action.”

He pulled up a feed to show the view from some cameras. The houses are obviously all empty, but there is still something extremely voyeuristic and downright creepy about peeking into people’s homes like this. The engineer then pulled up a recording of an actual success story – you see a man walking around a house, casually opening the drawers and searching through them. He opens a cupboard and takes a few things, and then walks into another room.

We skipped ahead a little in the video, and you can see that as he opens up a suitcase to see what’s inside, the police arrive, and surround him quickly. Within moments he’s been taken apprehended, and then marched out.

“There is ample evidence from history and otherwise on how minoritised communities become the first victims of a surveillance state,” said Noopur Raval, a PhD candidate in Informatics at the University of California, Irvine, and previously an affiliate at the Berkman-Klein Center for Internet and Society at Harvard University.

China, Raval said, “is taking this panoptic state to its literal culmination with thousands of cameras and associated facial recognition software and database-creation to punish and shame people for as little as jaywalking on the road.”

In the India, she added, such data — which is poorly secured — could be deployed by vigilante lynch mobs.

“Our datafication is also happening through private, corporate actors who are stepping in to help the state do this,” Raval added. “How this infrastructure is set up, who is being contracted, what are the various pipelines — these things are less than transparent right now.”

Chandrababu Naidu’s vision of a perfectly ordered society, Choudhary of the Software Freedom Law Centre said, could only result from a perfect surveillance system.