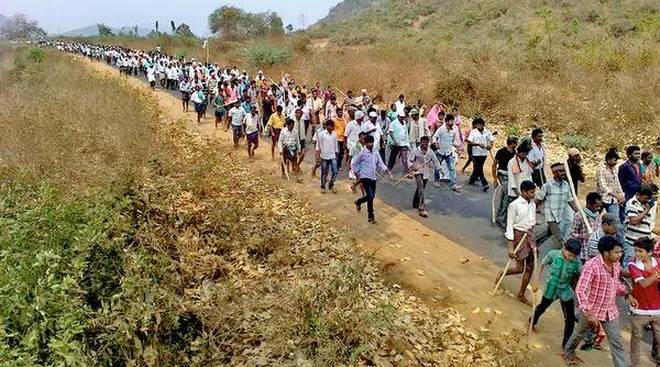 Land Acquisition Amendment Bill of Andhra Pradesh is Anti People, We Demand Withdrawal of it

We the people’s movements and Civil Society Organisations from across India condemn the Presidential assent to the recent amendment Bill passed by the Andhra Pradesh Legislative Assembly, severely diluting provisions of the Right to Fair Compensation and Transparency in Land Acquisition, Rehabilitation and Resettlement Act (LARR), 2013. This amendment is an insult to people who hard fought to secure progressive provisions in the LARR 2013, weaken people’s power to challenge illegal and unjust forced acquisition of land, and empower the state and corporations to infringe upon people’s rights over natural resources.

The amendment opens the doors to all kinds of projects violating the purpose of public purpose. If the provisions of Chapter II and Chapter III of LARR Act, namely determination of Social Impact Assessment and Public Purpose, special Provisions to safeguard food security along with the consent of 70% landowners are circumvented, the very goal of the Act would be defeated. The amendment empowers the District Collector to pass an award for acquiring land after taking consent of the interested person without making an enquiry.

In the Amravati Capital City project in Andhra Pradesh, this amendment will only embolden the efforts of the state in going ahead with the project, which involves coercion and intimidation in acquiring farmland despite pending cases, injunctions by courts and people’s protests. This is an attempt by the state to legitimise the illegal and unjust actions, and we strongly condemn it. As is being widely perceived, the inability of the state to acquire lands through its questionable ‘land pooling’ scheme in the case of Amaravati, in fact, triggered the proposal to amend the 2013 Act.

We also reckon that this amendment is in line with the directions of the Doing Business Report by the World Bank, where it recommends the dilution of land acquisition procedure and other regulatory ‘bottlenecks’ for enhanced investments. India’s rush to improve its ranking on the Ease of Doing Business, on the behest of such international financial institutions at the cost of such laws and policies which are proactive of farmers, workers and the marginalised communities will prove to be too costly to the people.

Asian Infrastructure Investment Bank [AIIB] has already approved lending to the Govt. of AP for five projects and further, the Amaravati Capital City Project, and Andhra Pradesh 24×7 – Power For All projects are being co-financed with World Bank. Farmers affected by the land-pooling scheme in the new capital have already raised questions on the AIIB and World Bank co-funded project and had to take up their grievances with the complaint mechanism of World Bank in the absence of compliance mechanisms and policies of AIIB. It is most unfortunate that states are vying with each other in this ranking and diluting protective laws, while no state is concerned about the interests of the communities that would be irreversibly jeopardised with such policy decisions.

Whether in Amaravati or elsewhere in the country, the worst-affected due to diversion of large swathes of fertile farmlands to corporate entities, non-farm purposes etc. would be tenant cultivators, women farmers, fisher people, forest-dwelling Adivasis especially in scheduled areas and landless Dalits, on a massive scale, whose rights and interests the State and the President has an obligation to protect.

We urge the state governments not to tamper with the provisions of the LARR 2013 and demand all political parties, including the BJP which was part of the passage of the 2013 Act, to ensure that the original provisions in the Act are retained and withdraw the amendments immediately.

Why not a Kama Sutra Day instead? #Yogaday
Impact of #AntiRomeo squads- Application to take wife out for anniversary dinner
Internet to remain free and fair in India: Govt approves net neutrality #Goodnews
Activists send notice to Union forest minister over public hearing