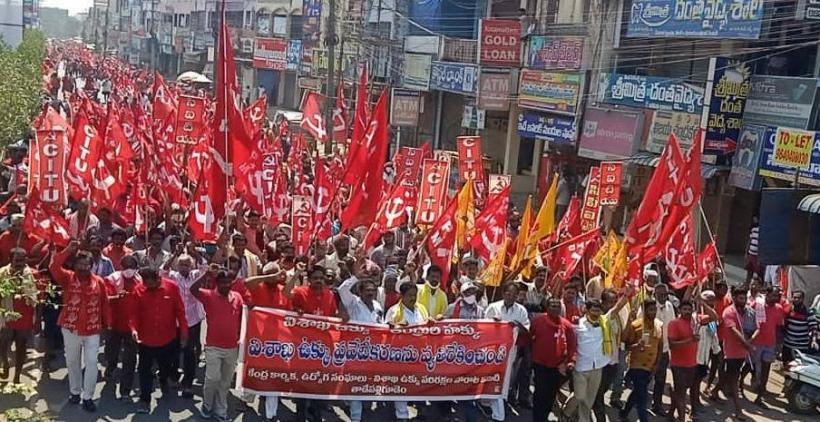 Workers’ unions and Opposition parties are saying that the BJP cannot sustain in Andhra if it doesn’t withdraw its privatisation plans. Prudhviraj Rupavath 05 Mar 2021

Trade unions, left parties joined by members of Telugu Desam Party, the ruling YSRCP party and other people’s organisations held a massive rally as part of the statewide bandh against the privatisation of Rashtriya Ispat Nigam Ltd. (RINL), the corporate entity of the Vishakhapatnam (Vizag) Steel Plant.

Lakhs of people thronged the roads across districts in the state to demonstrate their dissent and anguish against the Narendra Modi-led BJP government’s plans to privatise Vizag Steel Plant.

Visakhapatnam, the epicentre of the protests, witnessed a complete shutdown with all commercial establishments, shops, banks, theatres, educational institutions, public and private transportation facilities being closed.

In other parts of the state, while banks functioned, schools, colleges, shops and so on remained shut. According to local media reports, the state witnessed hundreds of rallies, road blockades and voluntary protests in support of the bandh call demanding the central government to step back on its plans to privatise the plant.

The workers of the Andhra Pradesh Road Transport Corporation, Andhra Pradesh Lorry owners association, unions among autos and other private transportation vehicles also stopped their work in support of the bandh.

Jyesta Ayodhya Ramu, president of the steel plant’s recognised union and convenor of the Visakha Ukku Parirakshana Porata Committee (VUPPC), said that the ongoing struggle is the largest movement against privatisation of the public sector.

“People of Andhra relate themselves to the Vizag Steel Plant as their collective property which was started after massive movement demanding the Plant in Visakhapatnam. They will not allow private entities to take over the Plant. The ongoing protests have denounced the Modi government’s aggressive privatisation of public sector entities,” he said.

“The massive success of the bandh sends a strong message to the BJP. the saffron party leaders cannot even enter the state if they do not withdraw the cabinet decision on strategic sale of the Plant,” he further said, adding that the state BJP leaders and their ally Jana Sena Party are just trying to save their face by speaking in favour of the protesting workers.

The ruling YSRCP party leaders and ministers have supported the bandh and participated in the protests across the state. Members of opposition parties including Telugu Desam Party, Communist Party of India (Marxist), CPI and Congress, appealed to the people to voluntarily shut down their daily activities.

Meanwhile, the relay hunger strike by the workers of the Plant led by  VUPPC entered the 22nd day on Friday.

“The impact of the bandh was seen in all districts from Srikakulam to Chittoor,” said CH Babu Rao, State CPI (M) secretariat member. While addressing a protest gathering in Vijayawada, Rao said, “The entire Andhra Pradesh is on one side and the BJP is on the opposite in this struggle. Further, people are seeing how the central government betrayed Andhra on its promises of Special Status to the state and funds for development of backward districts in the state.”

In Rayalaseema districts of the state, including Anantapur and Kadapa, trade unions and opposition parties led protests against privatisation and are demanding a new Steel Plant in Kadapa district.

Left parties held a public meeting near Hyderabad’s Dharna Chowk in solidarity with the protests in neighbouring state.

“The Steel Plant has been self-sufficient and  pays its dues regularly to the banks. The central government has never extended a helping hand to the Plant but deliberately stopped granting a captive iron ore mine which would have saved hundreds of crores for the Plant,” explained Ramu. He also extended his thanks to all the organisations for campaigning and participating in the protests and the bandh.

According to the workers’ unions, there are about 33,000 employees and workers in the steel plant and another 70,000 people depend on the Plant for their livelihood.

“People voted for the BJP thinking that they will save the public sector, not to sell them,” Ramu said.