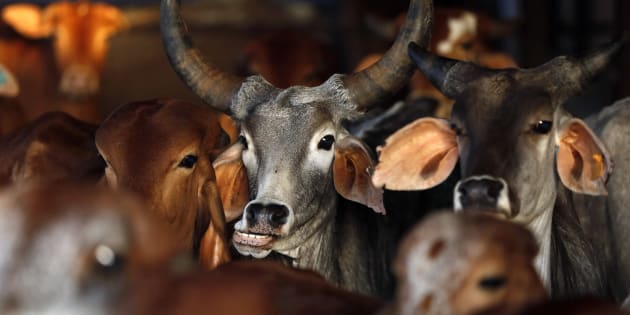 Furious at the policing by self-appointed cow protection groups, members of which beat up four men last week for ferrying carcasses, the Dalits of Saurashtra have found a unique way to raise their voice against the violence. They are dumping cow carcasses in government offices with a succinct message — ask the ‘Gau Rakshak’ groups to dispose of the dead animals — a job Dalits were burdened with.

Seven persons in Saurashtra also attempted suicide to protest the flogging of the men from the community by cow protectors on July 11. Videos circulating on social media showed the men cowering before the vigilante group as they were hit repeatedly with iron rods.

There have been several incidents of violence against people who transport cows across the country by vigilante groups that call themselves ‘gau rakshaks’ or cow protectors. In the latest incident, the four men suspected of trading in cow skin were brutally thrashed in Gujarat’s Somnath district.

Over Monday and Tuesday, scores of Dalits from villages brought dead cows in tractors and dumped them in government offices in Gondal and Surendranagar, the Times of India reported.

“We told the government to ask Shiv Sainiks and the self-proclaimed cow protectors to collect and dispose of the carcass from the villages and towns.”

“Dalits will stop lifting dead animals. We told the government to ask Shiv Sainiks and the self-proclaimed cow protectors to collect and dispose of the carcass from the villages and towns,” a Dalit rights activist, BK Parmar, told the paper.

TOI reported that office premises were littered with dead animals and employees were seen trying to escape the stench.

The situation was tense on Monday as angry protestors set fire to a State transport bus in Gondal and blocked a National Highway. The Collector’s office in Surendranagar was not spared as a group of Dalits dumped cow carcasses in the premises as part of their protest.

A Congress leader is among the seven people who attempted suicide. Anil Madhad, along with six others demonstrators, consumed pesticide. The Gujarat government has ordered a CID probe and offered compensation to the victims.http://www.huffingtonpost.in/2016/07/19/angry-dalits-are-dumping-cow-carcasses-at-govt-offices-after-flo/