Anti-Adani activists say they have launched an escalating disruption campaign against Queensland construction company Wagners, which is being targeted over a $30m contract to build an airstrip for the Carmichael coalmine.

Members of the group Galilee Blockade entered a Wagners industrial site at Pinkenba near the Port of Brisbane on Sunday afternoon, dressed as superheroes, as a precursor to further protests.

The company, which listed on the stock exchange in December, has previously said it would not be “intimidated” by activists if targeted for its role in the Adani Carmichael mine. Galilee Blockade has previously targeted contractors working with Adani on the project, and claims success for the decision by Downer EDI last year to back out of a $2.6bn construction deal.

The fresh protest action marks the resumption of those tactics by the anti-Adani group, and comes after a quiet few months in which the Indian conglomerate has made few public statements while attempting to finance the project.

There are increasing signs Adani is baulking at any further financial commitment to the project while it searches for an investor. Those signs include a recent decision by Townsville council to extend negotiations over a deal to part-fund the airport. The Townsville mayor, Jenny Hill, said the deal would not be signed off until Adani “can guarantee the project will go ahead”.

Wagners has the contract to build the airport, in total worth about $30m. The activists say the financial cost of their disruption campaign would quickly cancel out any profit Wagners would make from the Adani contract.

“Any large contractor willing to threaten our future by working with Adani is bound to be targeted by citizen activists,” Galilee Blockade spokesman Ben Pennings said. “Australians clearly don’t want the Adani mine and will act decisively when governments fail to.” 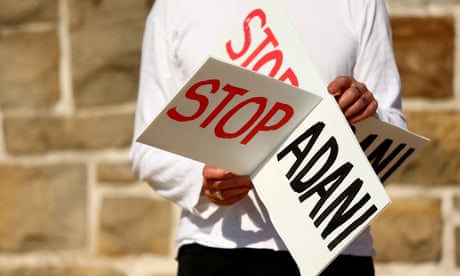 Queensland ministers will be targeted if state funds roads for Adani, warn activists

“These citizens are not just disguised as superheroes, they are superheroes. Risking arrest for the wellbeing of your fellow citizens is both courageous and, seemingly, necessary.”

“It’s not acceptable for any company to threaten massive environmental damage against the will of traditional owners and the Australian people. We will disrupt and blockade Wagners’ industrial sites till they get out of bed with Adani.”

On Sunday the activists handed out flyers to Wagners staff asking for anonymous information about the Pinkenba site.