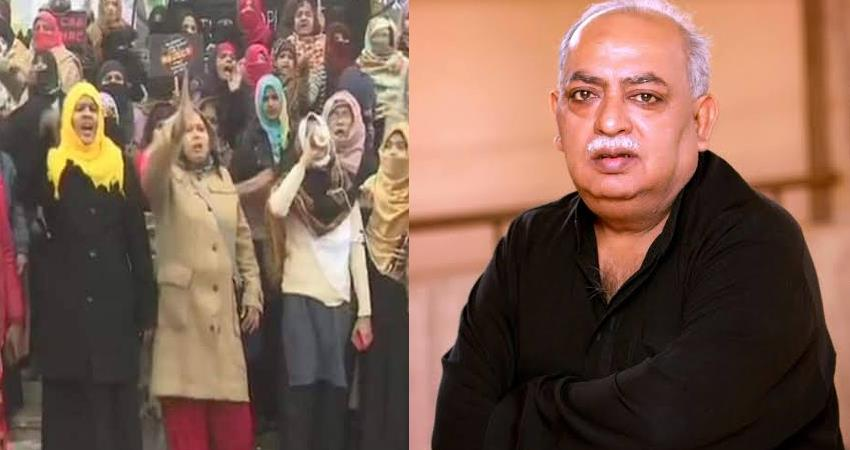 Noted Urdu poet Munawwar Rana has sharply criticised the Yogi Adityanath government and Lucknow Police after his daughters were booked during an anti-CAA protest.

Noted Urdu poet Munawwar Rana has sharply criticised the Yogi Adityanath government and Lucknow Police after his daughters were booked along with other women protesters for participating in the indefinite protest against the amended citizenship law at the Ghanta Ghar area since Friday last week.

He also hit out at the BJP for organising a pro-CAA rally despite Section 144 being imposed in the Lucknow.

Speaking to India Today TV, Munawwar Rana said, “Ahead of Home Minister Amit Shah’s visit, those protesting against the law, which is discriminatory, have been booked. However, more people belonging to every section of society will continue to raise their voices. Section 144 has been imposed in Lucknow. The BJP leaders can address a huge gathering in the state capital despite prohibitory orders but women are being targeted for peacefully protesting against an unconstitutional law. The police can register more FIRs but it cannot suppress the voice of the people.”

His daughters Sumaiya and Fauzia have been named in one of the FIRs registered at the Thakurganj police station.

“It is clear that the government is misusing section 144 to suppress the voices of those protesting peacefully, which is our constitutional right. However, we will continue to exercise our fundamental rights of peaceful protest. Prime Minister Modi said that NRC is not on the agenda but Amit Shah said that it will be implemented across the country. They are only misleading the people. Why Muslims have been excluded from the CAA?” asked Sumaiya.

Fauzia said, “They first took away our blankets and food from Ghanta Ghar. They also locked our toilets. Now an FIR has been registered against us. Let the police register more cases but we will continue to visit Ghanta Ghar till the government doesn’t withdraw the CAA.”ADVERTISEMENT

Meanwhile, other Muslim women also gathered at Amit Shah’s pro-CAA rally in Lucknow and welcomed the government’s decision to pass the CAA law.

“The women who are protesting against the CAA in different parts of the country have been misled by the opposition parties. This government has done development without any discrimination. It has done historic work by enacting a strict law against triple talaq. We will reach out to the Muslim women who are protesting against the CAA,” said Nausheen, raising pro-CAA placard at the BJP rally.

UP minority affairs minister Mohsin Raza said, “Ghanta Ghar is a tourism site where tourists and locals come every day in large numbers. The women are sitting there on protest as part of the well-planned conspiracy by the opposition parties and without permission from the administration. This is why police have registered FIR against Munawwar Rana’s daughters and other protesters.”

“It is true that prohibitory orders have been imposed in Lucknow but Amit Shah’s programme was planned much earlier and proper permission was taken. The anti-CAA protests have been sponsored by the opposition parties like the Congress, SP and BSP for polarisation politics.”

According to Lucknow police, it identified and named 18 persons and lodged three criminal cases against protesters, mostly women, demonstrating against the new citizenship law in Lucknow’s old quarters. Among 18 booked are daughters of poet Munnawar Rana — Sumaiya Rana and Fauzia Rana.

In three separate FIRs lodged late on Monday night at the Thakurganj police station, around 150 people, including 130 unidentified, were booked under sections related to rioting, joining or continuing unlawful assembly knowing it has been commanded to disperse, disobedience to order duly promulgated by public servant and danger or obstruction in public way of the Indian Penal Code