Anti-Dalit Stir in Maharashtra Worries BJP Ahead of 2019 elections 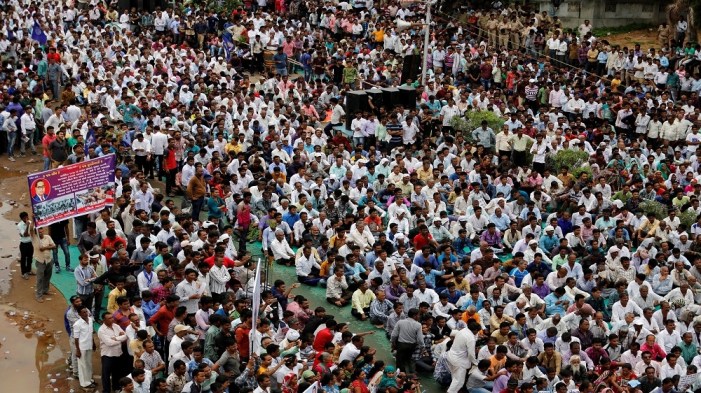 Fast-tracking the work on a mega Ambedkar memorial and 100% subsidy to buy farmland for poor and landless scheduled caste labourers — these are among programme that the BJP government in Maharashtra announced to win over the Dalits ahead of elections next year.

Yet, the perception among the Dalits in the state largely remains the same, that the BJP is an anti-Dalit party, say community leaders and political analysts. This is also the tone of messages being circulated among the community on WhatsApp and other social networking sites, they say. Recent incidents like the Bhima-Koregaon riots have only reiterated that view.

“The BJP is a pro-Brahmin party. We gave it a chance in 2014; however, its record over the Bhima-Koregaon violence and the dilution of the atrocity act shows that the party will not play fair,” said a Dalit contractor, who doesn’t want to be named as the matter is sensitive and he deals with the government.

The Bhima-Koregaon incident rankled the community in Maharashtra. People who were returning from an event to commemorate an 1818 battle in which the British army comprising Dalits defeated the upper caste Peshwas, were allegedly attacked, triggering the riots. Dalit groups claimed the attacks were orchestrated by two men with ties to the BJP and RSS: Sambhaji Bhide and Milind Ekbote. The government said there was no evidence against Bhide, but arrested Ekbote who is now out on bail. The community is angrier after last week’s arrest of one of the organisers of the Bhima-Koregaon Dalit march, Sudhir Dhawale, with the police claiming that he along with four others were involved in a Naxal plot to assassinate Prime Minister Narendra Modi.

People like Dalit writer and activist Anand Teltumbde see the arrest of Dhawale as an attempt to save the real perpetrators of the riots.

“What is happening is very unfortunate and the message is being sent clearly that whenever Dalits raise their voice, they would be crushed and this is how the government is doing it,” Teltumbde said. “The people who were actually involved in the riots are out in the open … the government is raising this Naxal bogey to divert the issue.”

Sunday’s incident where two Dalit boys were alleged stripped naked and beaten up because they swam in a well belonging to an upper caste man has further heightened the suspicion against the BJP.

“There is visible anger among the Dalit community; you cannot give us doles like building a statue here and announcing some scheme while you suppress our voice,” Teltumbde said.

The Dalits were never fond of the BJP and RSS as they felt the two were a party of Brahmins, said Nilu Damle, researcher, author and political analyst. “The RSS realised this and in 1977 brought in people from different communities to show that they were all-encompassing.”

The BJP also had no economic roots in Maharashtra as most sugar factories and textile mills that generated employment were controlled by the Congress, he said, adding: “So there was one more reason why the Dalits were not comfortable with you as you had no involvement in their jobs.”

Things changed in 2014 with the advent of Narendra Modi. “Dalits felt that this was one leader who would overlook caste and create jobs and hence voted for him. The promise has not been fulfilled, the rural economy is in bad shape and there are no jobs, the Bhima-Koregaon incident and the dilution of the atrocity act have only made matters worse,” Damle said.

While the Dalit population is around 11.81% in the state, they do have their pockets of influence and can swing many seats.

Damle is unsure of how the Dalit anger would translate into votes. “The Congress has not done anything, nor has the BJP — so I don’t know,” he said. “The conversations on social networks will make a difference but it is tough to say who they will vote for.