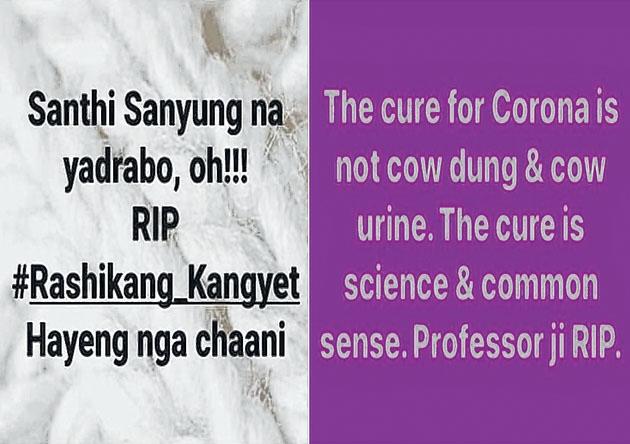 Its shocking that the fabricated and arbitrary charges have been slapped of the National Security Act (NSA) on Mr. Wangkhemcha Wangthoi @ Kishorechand (journalist) and Mr. Erendro Leichombam (political activist). The Manipur Police detained them for writing social media posts on the inefficiency of cow dung and cow urine in fighting Covid.

About the Human Rights Defenders:

Mr. Wangkhemcha Wangthoi @ Kishorechand is an Associate Editor of The Frontier Manipur news media. He has been a journalist for nearly a decade as a reporter and anchor in two popular local TV channels in Manipur namely ISTV and Impact TV. Mr. Kishorechand was arrested and detained under the NSA in late 2018 for being critical of the government and released after four months.

Mr. Erendro Leichombam is a political activist associated with the political party PRAJA (People’s Resurgence and Justice Alliance), associated with activist Ms. Irom Sharmila. He has been vocal against militarisation and campaigns for peace and democracy in Manipur. Mr. Liechombam was charged with sedition in 2020 for a Facebook post critical of Sanajaoba Leishemba, the state’s titular king, for being elected to the Rajya Sabha as a BJP member.

Details of the Incident:

On May 13, 2021, the BJP President of Manipur, Mr. S. Tikendra Singh succumbed to Covid. On the same day at 08:15 pm Mr. Wangkhemcha Wangthoi @ Kishorechand posted a message at his Facebook account stating in Manipuri:

On May 13, 2021 another FB post was made by Mr. Erendro Laichombam stating, “the cure for Corona is not cow dung & cow urine. The cure is science & common sense. Professor Ji RIP.”

Learning about these posts, the BJP state unit filed a complaint on May 13, 2021 with the Officer-in-charge, Imphal Police station, seeking registration of an FIR on Mr. Leichombam and Mr. Kishorechand for deliberately insulting and outraging Hindu religion and inciting enmity, ill-will, and violence amongst people insulting religious sentiment of the bereaved President of BJP in Manipur and his family.

On May 13, 2021, around 9:00 pm a group of policemen from Imphal Police Station, barged into Mr. Kishorechand’s house while he was resting. The police heckled and physically assaulted Mr. Kishorechand and shouted and threatened his family.

On May 14, 2021, an FIR No. 139(05)2021 was registered against both Mr. Kishorechand and Mr. Leichombam at the Imphal East Porompat sub-division Police station under the sections 153A – (promoting enmity between different groups on ground of religion, race,place of birth, etc) and 505(b)2 (insults to the religion or religious beliefs). They were remanded to police custody till May 16 for investigation.

On May 16, 2021, both of them were produced before Mr. Y Somorjit, the Chief Judicial Magistrate, Imphal West, through video conferencing. The CJM released them in pursuance of the provision of law and recent directions of the Supreme Court on decongestion of prisons during Covid pandemic.

On May 17, 2021, before the police station could be intimated officially regarding the bail order, they were charged under the NSA at 7:40 pm, obstructing CJM’s release order. They were also charged with IPC Sections 295-A, 503, 504, 34 and the same were added to the FIR. On May 17, 2021, they were sent to Central Jail, Sajiwa, where they are currently incarcerated.

It shocking that a respected journalist and a political activist have been charged under the stringent NSA for social media posts extolling science and this is an obvious act of abuse of power. The HRDs have a full right to express themselves on their social media pages without being penalised under draconian law for it. Also NSA can only be invoked on a person if “he/she is a threat to national security or to prevent him/her from disrupting public order.” It is a mockery of Indian law to charge HRDs for posts upholding science and rationality. The fact that NSA was slapped on the two HRDs after their bail was approved by the CJM, proves this to an act of political reprisal.

The arrests of the two HRDs under NSA for social media posts have been strongly criticised across the nation. The Mumbai Press Club said, “we strongly condemn the arrest of Imphal- based journalist Kishorechandra Wangkhem and demand his immediate release. While expressing his condolences to a BJP leader, he wrote cow urine and dung are not a cure for Covid.”

Article 19, of the Universal Declaration of Human Rights (UDHR) mandates freedom of opinion and expression and is protected in all relevant human rights treaties. Freedom of opinion and expression are fundamental rights that contain both a personal and a social dimension. As per General Comment No. 34 on Freedoms of Speech and Expression, Human Rights Committee has observed that free speech and expression is an “indispensable conditions for the full development of the person”, “essential for any society” and a “foundation stone for every free and democratic society”.

Governments and other powerful actors, seeking to escape scrutiny and stifle dissent, often respond to critical reporting or activism with attempts to silence them. The protection of journalists and human rights defenders, and ending impunity for attacks against them, is a global priority for safeguarding freedom of expression. States are under an obligation toprevent, protect against, and prosecute attacks against journalists and human rights defenders.

NHRC should treat this as a case of reprisal against HRDs for exercising their fundamental rights guaranteed through Article 19 of the Indian Constitution. Actions of the Manipur Police are malafide, baseless and politically motivated. NHRC should urgently –