Are cows more sacred than women in India?

Sayan Chatterjee interviews the photographer behind the Cow Mask project 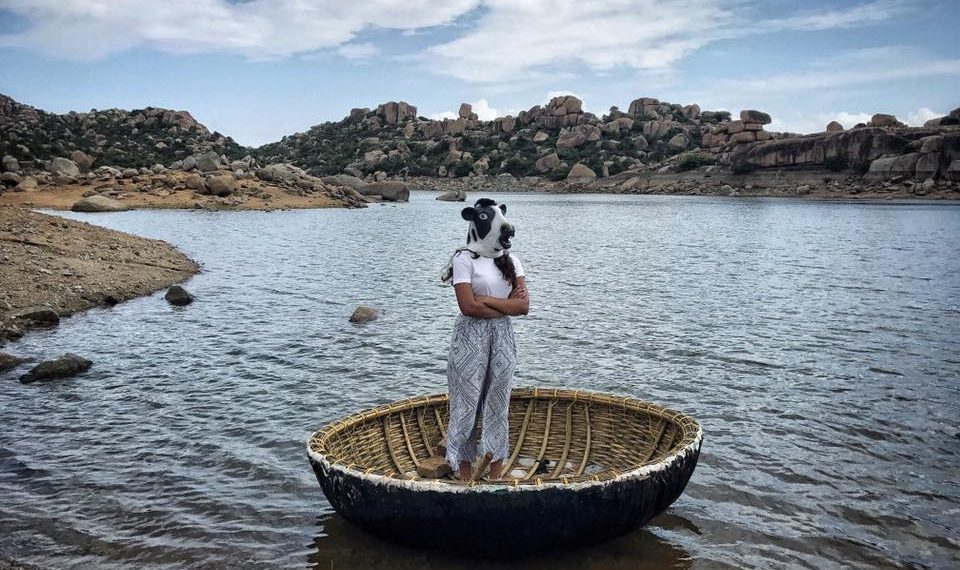 Art and activism have gone hand in hand in challenging established norms around gender representation in politics, religion, sexuality and the workplace using various mediums and platforms. Twenty-four-year-old photographer Sujatro Ghosh has done just that through his ‘Cow Mask project’ to address the issue of women’s safety in India.

Ghosh’s project, shot entirely on a mobile phone, features women wearing cow masks while posing at iconic  landmarks across the country. A Jamia Millia Islamia alumnus, Ghosh started his photo series at India Gate in New Delhi. I recently met him at a forum on gender empowerment and had a chance to talk to him about his project and perspectives on the millennial Indian woman.

Tell us how you conceptualised the Cow Mask project?

I have been working with women rights and several civil society organisations for many years now. My sensitivity towards this issue which, therefore, is not recent, gave birth to the the project, specifically after the rise of the right wing in India. As a result, the number of cow vigilante groups have been on the rise, leading to some attacks on minorities.

The concept behind this project is to visually illustrate the dichotomy behind our misplaced priorities where the chances of delivering (almost immediate) justice to a cow who is harmed is higher by several degrees than to a woman who has been raped, molested, or been subjected to domestic violence. The idea has been to create awareness through photographing women in public and private spaces wearing the mask of a cow, thereby raising a quite literal question, “Are cows safer than women in this country?”

The context in which the cow mask has been set is in tune with the current socio-political scenario in India, but my fight against the patriarchal society has been a long one. But the project definitely speaks for women worldwide and not just India. And that’s evident now with the project’s global exposure and acceptance.

Why was Delhi your first location?

I chose Delhi for the first photograph because the city was the hub of the debate. But soon I realised that it is more of a private issue for every woman. I have now started photographing them in their private space as well.

Your project was born around the central theme of raising public awareness. Do you believe that photography can be a tool of protest?

Art as a tool of change is quite powerful and I have been a witness to the impact of my project. So, yes, I do believe photography can be a very effective means to address issues. I believe it plays a big role in forming opinions, educating us about truth and transforming mindsets. When art reflects the times we live in, bringing about such positive changes in people through art is definitely possible.

Is there a link between the subjects photographed and the places where you take the pictures?

Do you think the issue of Indian women’s rights is a matter that should affect women worldwide?

The contexts in which Indian women’s rights or the Indian feminist movement are set are completely different to that of their counterparts in the West or to any other country for that matter. For instance, the suffragists and the suffragettes began their fight for justice with the issue of voting rights for women. But we never really had to fight for our voting rights, we already had it. Similarly, the fight to abolition sati before and during the independence movement or for the law to criminalise dowry after independence are matters concerning the Indian State specifically.

I do not see how it it is possible to universalise feminist struggles when the struggles for certain women’s rights are set in contexts specific to practices of particular nations. Having said that, I also find it necessary to state that any feminist struggle or movement in any country across the world inherently carries within themselves the burden of fighting against a patriarchal system that systemically affects all of us. Fighting against patriarchy and it’s ill-effects, which may be of contexts specific to countries or societies, may therefore be the larger universal struggle uniting feminists [women and men of various nationalities, religions and skin colour] the world over.

What do you think are the cultural, political and religious reasons that at times influence the unequal treatment of women in India?

In India, the cultural, the religious and the political are closely mixed, often flowing in and out of one another. Each one in turn affects the other two. One of the major contributors to women being unequal in the Indian scenario is the Brahminical caste system, thoroughly religious by nature, which has been in practice for centuries. The right to receive education has been the sole right of only upper caste Hindu males for thousands of years. Even though laws have now been put into place [to abolition the caste system and to ensure everyone has a right to education], the repercussions of age-old practices still affects us all.

Many social problems often stem from cultural practices such as dowry, child marriage, or giving women no choice in their education and career. Practising dowry, in turn, led to the rise in female infanticide. The domesticated role of the woman was born through the interpretation of religious texts.

Such beliefs eventually led to political issues where women weren’t adequately represented in public offices and in parliament. The biggest example would be how The Women’s Reservation Bill, which proposed a 33.3% reservation for women at each level of legislative decisionmaking, has still not been passed into a law, despite being introduced in parliament two decades ago. Perhaps political parties fear that many male leaders will have no chance of being elected if the reservation comes into effect. This is direct effect of patriarchal attitudes that are still largely existent in society.

The Indian parliament is considering introducing the death penalty for those who torture animals, however, no changes have been made to the justice system to advocate for stronger punishments against those who commit crimes against women. What are your thoughts?

Bills [Cow Protection Bill, 2017 by Subhramaniam Swamy] have been pushed which talk of providing the death penalty for those who slaughter cows. In my opinion, while I find this outrageous, I don’t believe capital punishment can be the solution to any crime committed against any living being. After all, how many will you kill? We need to work on fixing people’s mindsets and mentalities towards each other to bring about any change. I’m also not aware of any political group which has proposed any additional measures of justice for women against whom violence has been committed.

How have people in India reacted to your project?

[The project] has already gained its initial momentum and has managed to effectively challenge the status quo of the current socio-political situation in the country. Students, youngsters and women who have dealt with violence and rape, the concerned elderly, civil society organisations, as well as organisations working for women trafficking have expressed their sentiments and support for this cause.At the same time, political and religious extremists and fundamentalists have been upset over their beliefs being threatened through art. Responses from across the globe, both positive and negative, have managed to fuel the need to continue with the endeavour and create significant impact in the lives of the people.

Going forward, what future do you see for the project?

The overwhelming response and feedback has egged me on to expand the project in various other locations across the country. The idea behind the second phase of ‘The Cow Mask Project’ is to generate an active discourse across various sections of the masses of the need to deliver justice to women and ensure safety and security in all spaces and at all times through powerful imaging and photography.

In addition, it is also important that what began as a personal venture now ought to transfer hands and become a full-fledged people’s project through women’s participation and collaboration at several levels. Therefore, written documentation of the entire journey is a major component of the second phase. It will seek to give voices to the oppressed and the marginalised, to narrate stories of those who have been delayed justice for the crimes committed against them through the magnetic interplay of words and images. From the tribal woman to the adolescent slum dweller in a metropolitan, from a small town homemaker to the urban businesswoman, each and every voice is of vital importance and needs to be expressed, heard, documented and studied.

Sayan Chatterjee is a Delhi-based publicist who also contributes to print and online publications.