Are sanitation workers not essential enough? 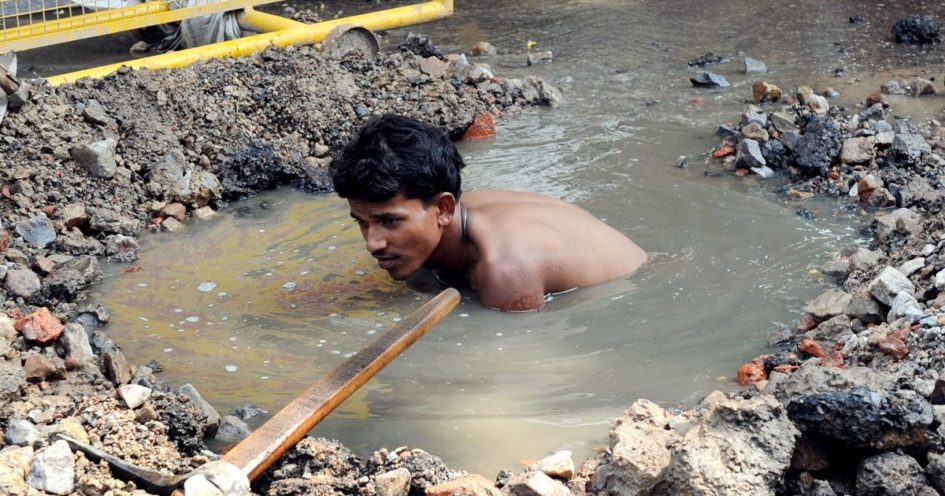 The nature of responsibilities that have been bestowed upon sanitation workers is widely known and so is the stigmatisation they face due to it. Ever since the pandemic broke out, this stigmatisation not only increased but also reflected in the state’s handling of the matters pertaining to the safety of sanitation workers despite their active role during the pandemic as essential workers. WHO considers sanitation workers to be providers of essential public services. These services include, but are not restricted to, cleaning streets, public spaces, parks, sewers, public toilets, pits, septic tanks; entering manholes; transporting faecal waste; working treatment plants etc. A long slew of these works often require workers’ attention at the cost of their safety, health as well as dignity.

The responsibilities of sanitation workers can be traced back to the historical roots of brahminical social order in which manual scavenging and other menial jobs were assigned to the Dalit section of the society, as evidenced through ancient texts like Dharmashastras.

Despite the abolition of untouchability and caste-based discrimination in India after independence, these jobs still witness chiefly Dalit recruitment due to the persistent stigma surrounding such jobs with their caste identity. This added factor of caste identity has resulted in further vulnerability of a particular section that includes these essential service providers.

With the added circumstance of the COVID-19 pandemic, the condition of the sanitation workers have been subjected to more dangers than they previously were due to the extra responsibilities pertaining to the handling of COVID related medical waste as well as sanitising infected spaces of hospitals and clinics.

A health insurance scheme was launched by the Government of India which was planned to come into effect from 30th March 2020 to September 2020. This scheme went on to be extended till 24th March 2021, but the Government decided not to extend it any further. At present, no financial assistance has been launched to help these workers and according to Ramdas Athawale’s statement in Rajya Sabha on 16th September 2020, no data has been maintained by the Government on the number of deaths of sanitation workers, caused due to COVID-related reasons, be it those working for the government institutions or those who are chiefly employed in the informal sector.

A study jointly conducted by the Urban Management Center and WaterAid India, published in September 2020, outlined the major problems that sanitation workers had to suffer due to the Government’s incompetence in making appropriate policies for them as well as poor implementation of measures that the government did introduce. These issues included lack of proper awareness regarding the symptoms of the infection caused by the virus as well as the use of proper protective gears – their usage, management and proper disposal; an extreme lack of Personal protective equipment (PPE) kits has been observed which led to irregular usage; a high percentage of workers did not have access to proper facilities like soap and water to practice basic hygiene despite having duties which require them to move from one place to another; a very low percentage of the sample space in the study responded to have undergone thermal screening or medical examination for COVID-19; working hours increased for a significant number of workers during the lockdown and their has been no compensation for the extra working hours, some workers reported difficulty in commuting to work due to COVID restrictions; none of the informal staff had insurance coverage and only 35% of those who belong to the formal sector had their insurance covered.

Women’s representation is greater in the informal sector and they were among the most disadvantaged groups within the sanitation worker communities during the pandemic. Difficulties in commuting from home to work and back during menstruation, lack of toilet facilities, overburdening of domestic and care responsibilities, etc.

The schemes that the government introduced to relieve the workers from such difficulties were not uniformly implemented properly, as a result of which a very short percentage of workers from the formal sector could avail the benefits and those from the informal sector could not avail anything at large. Despite fulfilling their duties in dangerous working conditions, dealing with human excreta and toxic wastes without any protective gear, they also have to bear the brunt of caste marginalisation along with the stigmatisation caused by the nature of their work.

The perpetual neglect by the authorities only deepened the difficulties. The lack of recognition among the frontline workers as compared to the medical professionals has led to mystification and ignorance of their crucial role. Such dehumanising nature of work, caste-based discrimination, and lack of concern towards their well being must be brought to spotlight in order to demand a specific law for sanitation workers. The already existing fundamental rights do not seem to apply to them which is clearly evident in their messed up conditions.

Human rights violations in Kaziranga: NAPM calls it ‘militarisation, not conservation’
Why I want to ask disturbing questions and say the unsaid- Meena Kandasamy
Open letter to PM Modi - Do you really want to stop the violence?
S. P. Udayakumar- 7th day of Fast- Message to the Nation