Are you opposed to fracking ? Then you might just be a terrorist

From North America to Europe, the ‘national security‘ apparatus is being bought off by Big Oil to rout peaceful activism 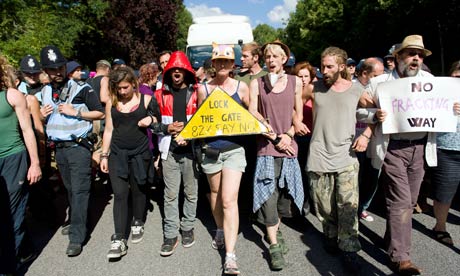 Over the last year, a mass of shocking evidence has emerged on the close ties between Western government spy agencies and giant energycompanies, and their mutual interests in criminalising anti-fracking activists.

Activists tarred with the same brush

The Northern Gateway is an $8 billion project to transport oil from the Alberta tar sands to the British Columbia coast, where it can be shipped to global markets. According to the documents a Canadian federal agency, the National Energy Board, worked with CSIS and the Royal Canadian Mounted Police to coordinate with Enbridge, TransCanada, and other energy corporations in gathering intelligence on anti-fracking activists – despite senior police privately admitting they “could not detect a direct or specific criminal threat.”

Now it has emerged that former cabinet minister Chuck Strahl – the man appointed by Canadian prime minister Stephen Harper to head up the CSIS’ civilian oversight panel, the Security Intelligence Review Committee (SIRC) – has been lobbying for Enbridge since 2011.

But that’s not all. According to CBC News, only one member of Strahl’s spy watchdog committee “has no ties to either the current government or the oil industry.” For instance, SIRC member Denis Losier sits on the board of directors of Enbridge-subsidiary, Enbridge NB, while Yves Fortier, is a former board member of TransCanada, the company behind the proposed Keystone XL pipeline.

Counter-insurgency in the homeland

Investigative journalist Steve Horn reports that TransCanada has also worked closely with American law-enforcement and intelligence agencies in attempting to criminalise US citizens opposed to the pipeline. Files obtained under freedom of information last summer showed that in training documents for the FBI and US Department of Homeland Security (DHS), TransCanada suggested that non-violent Keystone XL protestors could be deterred using criminal and anti-terror statutes:

“… the language in some of the documents is so vague that it could also ensnare journalists, researchers and academics, as well.”

According to the Earth Island Journal, official documents show that TransCanada “has established close ties with state and federal law enforcement agencies along the proposed pipeline route.” But TransCanada is only one example of “the revolving door between state law enforcement agencies and the private sector, especially in areas where fracking and pipeline construction have become big business.”

This has had a tangible impact. In March last year, US law enforcement officials had infiltrated and spied on environmentalists attending a tar sands resistance camp in Oklahoma, leading to the successful pre-emptive disruption of their protest action.

Just last December, other activists in Oklahoma faced terror charges for draping an anti-fracking banner in the lobby of the offices housing US oil and gas company, Devon Energy. The two protestors were charged with carrying out a “terrorism hoax” for using gold glitter on their banner, some of which happened to scatter to the floor of the building – depicted by a police spokesman as a potentially “dangerous or toxic” substance in the form of a “black powder,” causing a panic.

“After a few uneventful minutes, [the activists] Stephenson and Warner took down the banner and left the building – apologising to the janitor who came hurrying over with a broom. A few people, clutching coffee cups, wandered around in the lobby below, according to Stephenson. But she did not detect much of a response to the banner. There wasn’t even that much mess, she said. The pair had used just four small tubes of glitter on their two banners.”

The criminalisation of peaceful activism under the rubric of ‘anti-terrorism’ is an escalating trend linked directly to corporate co-optation of the national security apparatus. In one egregious example, thousands of pages of government records confirm how local US police departments, the FBI and the DHS monitored Occupy activists nationwide as part of public-private intelligence sharing with banks and corporations.

Anti-fracking activists in particular have come under increased FBI surveillance in recent years under an expanded definition of ‘eco-terrorism‘, although the FBI concedes that eco-terrorism is on the decline. This is consistent with US defence planning documents over the last decade which increasingly highlight the danger of domestic “insurgencies” due to the potential collapse of public order under various environmental, energy or economic crises.

In the UK, Scotland Yard’s National Domestic Extremism and Disorder Intelligence Unit (which started life as the National Extremism Tactical Co-ordination Unit and later became the National Domestic Extremism Unit), has had a long record of equating the spectre of “domestic extremism” with “single-issue protests, such as animal rights, anti-war, anti-globalisation and anti-GM crops.” Apart from animal rights, these movements have been “overwhelmingly peaceful” points out George Monbiot.

This has not prevented the police unit from monitoring almost 9,000 Britons deemed to hold “radical political views,” ranging from “anti-capitalists” to “anti-war demonstrators.” Increasingly though, according to a Guardian investigation, the unit “is known to have focused its resources on spying on environmental campaigners, particularly those engaged in direct action and civil disobedience to protest against climate change.”

Most recently, British police have gone so far as to conduct surveillance of Cambridge University students involved in social campaigns like anti-fracking, education, anti-fascism, and opposition to austerity, despite a lack of reason to suspect criminal activity.

This is no accident. Yesterday, senior Tory and ex-Cabinet minister Lord Deben, chairman of the UK government-sponsored Committee on Climate Change, characterised anyone suggesting that fracking is “devastatingly damaging” as a far-left “extremist,” holding “nonsensical” views associated with “Trotskyite” dogma. In contrast, he described “moderate” environmentalists as situated safely in the legitimate spectrum of a “broad range of consensus” across “all political parties.”

In other words, if you are disillusioned with the existing party political system and its approach to environmental issues, you are an extremist.

The emails exposed the alarming extent to which government is “acting as an arm of the gas industry,” compounding earlier revelations that Department of Energy and Climate Change employees involved in drafting UK energy policy have been seconded from UK gas corporations.

Public opinion is the enemy

The latest polling data shows that some 47% of Britons “would not be happy for a gas well site using fracking to open within 10 miles of their home,” with just 14% saying they would be happy. By implication, the government views nearly half of the British public as potential extremists merely for being sceptical of shale gas.

This illustrates precisely why the trend-line of mass surveillance exemplified in the Snowden disclosures has escalated across the Western world. From North America to Europe, the twin spectres of “terrorism” and “extremism” are being disingenuously deployed by an ever more centralised nexus of corporate, state and intelligence power, to suppress widening public opposition to that very process of unaccountable centralisation.

But then, what’s new? Back in 1975, the Trilateral Commission – a network of some 300 American, European and Japanese elites drawn from business, banking, government, academia and media founded by Chase Manhattan Bank chairman David Rockerfeller – published an influential study called The Crisis of Democracy.

The report concluded that the problems of governance “stem from an excess of democracy” which makes government “less powerful and more active” due to being “overloaded with participants and demands.” This democratic excess at the time consisted of:

“… a marked upswing in other forms of citizen participation, in the form of marches, demonstrations, protest movements, and ’cause’ organizations… [including] markedly higher levels of self-consciousness on the part of blacks, Indians, Chicanos, white ethnic groups, students, and women… [and] a general challenge to existing systems of authority, public and private… People no longer felt the same compulsion to obey those whom they had previously considered superior to themselves in age, rank, status, expertise, character, or talents.”

The solution, therefore, is “to restore the prestige and authority of central government institutions,” including “hegemonic power” in the world. This requires the government to somehow “reinforce tendencies towards political passivity” and to instill “a greater degree of moderation in democracy.” This is because:

“… the effective operation of a democratic political system usually requires some measure of apathy and noninvolvement on the part of some individuals and groups… In itself, this marginality on the part of some groups is inherently undemocratic, but it has also been one of the factors which has enabled democracy to function effectively.”

Today, such official sentiments live on in the form of covert psychological operations targeted against Western publics by the CIA, Pentagon andMI6, invariably designed to exaggerate threats to manipulate public opinion in favour of government policy.

As the global economy continues to suffocate itself, and as publics increasingly lose faith in prevailing institutions, the spectre of ‘terror’ is an increasingly convenient tool to attempt to restore authority by whipping populations into panic-induced subordination.

Evidently, however, what the nexus of corporate, state and intelligence power fears the most is simply an “excess of democracy”: the unpalatable prospect of citizens rising up and taking power back.

Dr Nafeez Ahmed is executive director of the Institute for Policy Research & Development and author of A User’s Guide to the Crisis of Civilisation: And How to Save It among other books. Follow him on Twitter@nafeezahmed

Abandoned as a child bride, India’s first lady still hopes her husband will call
How neoliberalism colonised feminism – and what you can do about it
Are you going to Kudankulam?
BJP Supporters beat up muslim chicken stall owner #WTFnews