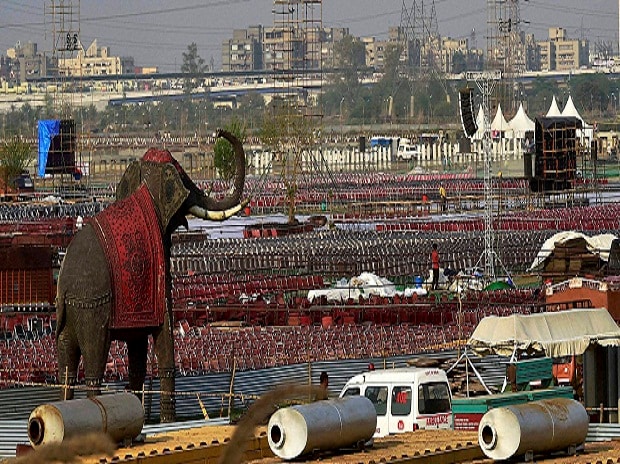 Workers make arrangements for the three-day World Peace Festival organised by spiritual guru Sri Sri Ravi Shankar in New Delhi
In the on-going saga of Sri Sri Ravi Shankar’s World Culture Festival to be or not, the biggest spectacle has been the National Green Tribunal. When needed to bite, it growled and found that the politically powerful sometimes don’t get deterred by mere growling that might still make a bureaucrat stand quivering in attendance before the quasi-court. The NGT squeamishly backed off.

Let us look at the facts. The NGT appointed panels, one with no less than the water resources secretary heading it, found that the festival organisers had violated environmental norms and conditions and harmed the flood plain. The conditional permission from the Delhi Development Authority (DDA), shoddy as it was, said, if conditions were not met the permission would be cancelled. DDA didn’t do it.

The court could have stayed the setting up of the event as it heard the matter right then. After all, by then it wasn’t some anti-national NGO claiming environmental damage but one of the senior most bureaucrats of the Union government in charge of keeping rivers clean backed by experts from institutions like IIT Delhi saying so on record. Once the court concluded that the event was in violation of norms and harmful to the river it could have stopped the function altogether and fined the organisers for restoration of the site and penal damages – the law and rules provide for it.

Instead, the court only imposed a penalty which was to be paid before the function starts. Today, it has deferred the end date for depositing the sum – the Art of Living group can pay much of it till three weeks after the function is over. As my colleague, Ankur Bhardwaj points out the threat to attach the grant from the government to the event if the organisers still don’t cough up the sum is actually a threat to attach public money, not the organiser’s property. The NGT, which said the petitioners were too late to justify its decision to not cancel the show altogether, has now altered its orders after hearing the AOL claim it doesn’t have the money.

In the meanwhile the media had made much of NGT’s ‘brave’ stance of finding fault in an event that is to be attended by no less than the powerful Prime Minister and retinue of BJP leaders. Has the NGT’s role has been brave or is it a case of a cop-out?

Rest assured, NGT has gone with the pattern that has been followed for a long while in Indian judiciary in dealing with environmental violation by large players, with exceptions so rare that everyone gets crazy (some happy and others really miffed) excited when exceptions do arise – remember the Vedanta case?

From the decade back, you could count them on your finger-tips. This, when governments and courts have found everything from gross violation to manipulation of records in cases before them. Everything can be ‘fixed’ retrospectively to let the show go on. In some cases retrofitting events and projects can and should work, one must agree, but what then is the deterrence for other violators if retrofitting becomes the norm and a jail sentence or a serious penalty an unused or exceptional provision of law.

Post-facto clearances with a few caveats and a little expense for large or prominent projects that were found violating green laws and causing damage is pretty much par for course. The NGT has done so too in this case. Unfortunately for the NGT this time, it had to act in full public glare which high decibel events and controversies only in Delhi can generate.

Thankfully, it didn’t claim its decision was in larger national and economic interest – something courts tend to do at times when letting off violators of green laws. Of course we have Sri Sri Ravi Shankar claiming the cultural event is so much in national interest that it was the army’s duty to help the private function.

But one can’t grudge Sri Sri Ravi Shankar promoting his show. Every event manager ought to try his or her best. Every event manager company in the country will tell you it takes a lot and a varied efforts to get all the permissions in place for one show. It’s the institution of NGT that has got diminished in this dance and drama event. That is a loss.http://www.business-standard.com/article/opinion/art-of-living-case-ngt-fails-to-show-courage-116031100646_1.html