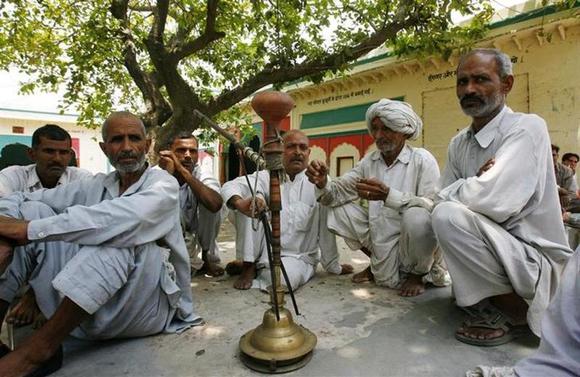 Villagers sit after attending a panchayat, or village council meeting, at Balla village in Haryana May 13, 2008.

NEW DELHI (Thomson Reuters Foundation) – Arvind Kejriwal, the new political star whose call for clean politics has struck a popular chord, has said he would not ban the illegal village courts because they had a “cultural” purpose despite their harsh treatment of women.

Kejriwal, who became chief minister of Delhi after his one-year-old Aam Aadmi Party (AAP) swept to power last month, will now contest the national elections due by May. His party’s key anti-corruption platform is seen as having considerable appeal among urban voters.

Many urban Indians had hoped the 45-year-old’s progressive social politics would include a strong agenda for women’s empowerment. But his stand on village councils – unelected all-male bodies which have issued many misogynistic decrees, including ordering ‘honour killings’ – contrasts with that of some women’s groups who want them dismantled.

Their diktats have ranged from banning women from wearing western clothes and using mobile phones to ordering the killing of young couples. Some councils have demanded that the minimum age of marriage be lowered to 16 from 18 for girls and 21 for boys as a way of coping with an increase in the number of rapes.

“No, it is not a question of banning these panchayats,” Kejriwal told Thomson Reuters Foundation late on Monday, referring to “Khap Panchayats”, the name given to village councils in rural north India.

Powerful village councils have governed India’s rural landscape for centuries, keeping a conservative grip on rural society that not only clashes with the current more liberal attitudes towards women, but also challenges the law of the land.

Acting as de-facto courts for millions of Indians, they settle disputes on everything from land and cattle to matrimony and murder, helping maintain social order in a country where access to justice can be slow and difficult for the rural poor and uneducated.

The councils are coming under growing scrutiny because of their brutal forms of punishment, prompting some women’s rights activists to label them the “Taliban of India,” after the Islamic fundamentalist movement active in Pakistan and Afghanistan.

Last week, 13 men were arrested after they were alleged to have gang-raped a 20-year-old tribal women on the orders of a village court in West Bengal as punishment for having a relationship with a man from another community.

The case has made waves in India, underscoring how sexual violence has become a serious social and political issue since the rape and murder of a physiotherapist on a moving bus in Delhi in December 2012, an attack that sparked nationwide demonstrations.

While the punitive edicts issued by these courts have been condemned by the Supreme Court, criticised by the media, slammed by feminists and even deemed unlawful by India’s most powerful politician, Sonia Gandhi, the councils continue to act with impunity, unchallenged by police and government.

This is largely due to their influence over millions of rural voters, making political parties reluctant to challenge them for fear of losing support.

Kejriwal – who hails from Haryana, one of the states where such councils are prevalent – has shaken up Indian politics, promoting an image of equality for all and avoiding the displays of power beloved by many Indian VIPs, such as expensive official cars and promising voters cheap water and electricity.

Yet many Indians are still unclear about AAP’s women’s rights policy, which has so far been confined to tackling the rise in reported rapes by holding police more accountable and setting up a Women’s Commando force in the city.

“You can’t have a situation that women are getting raped again and again everywhere and no one is accountable,” said Kejriwal, referring to the recent gang rape of a 51-year-old Danish tourist in New Delhi.

Activists have welcomed his insistence on tackling sexual violence against women, but say they are dismayed not only by the lack of clarity on issues such as economic and political empowerment of women, but also by some recent incidents.

Earlier this month, Kejriwal was criticised by women’s rights groups for backing his Law Minister Somnath Bharti, who led a mob which is alleged to have illegally detained and harassed a group of African women on suspicion they were part of a drugs and prostitution racket.

Another member of AAP’s leadership, Kumar Vishwas, was forced to apologise after video footage emerged from 2007 in which he made a racist and sexist joke about nurses from Kerala.

“On the question of gender, AAP are not unlike the other major political parties in India,” said Kavita Krishnan, secretary of the All India Progressive Women’s Association.

“They have not broken new ground, but have remained very carefully within the paradigm of protecting women and have not entered into the terrain of actually challenging patriarchy.”