As Delhi Air Quality Plunged, 30 Alerts That Were Never Issued Vehicles ply in reduced visibility in south Delhi as smog enveloped the city with a spike in particulate pollution. Over the last one month, residents of the national capital territory of Delhi should have received an alert every day, warning them that air quality readings were breaching acceptable levels.

An emergency air-quality warning system created in 2016 for the national capital territory of Delhi has failed its sole purpose: To warn citizens of hazardous levels of air pollution.

Over eight days to October 16, 2017, as Delhi’s air quality worsened, reaching 10-12 times above safe limits set by the World Health Organization (WHO), the government ignored its own plan, which also included a clean-up of the air. Officials should have, among other things, enforced pollution controls on thermal power plants, sprinkled water on roads to curb dust and curbed traffic jams.

Over the last one month, Delhi residents should have received an alert every day, warning them that air quality index (AQI) readings were breaching danger levels. Since October 8, 2017, air-quality levels crossed  “poor” eight times, “very poor to severe” 21 times and “emergency” once, as they have for 48 hours to November 8, 2017, according to data from the government’s own alert system, the Graded Response Action Plan (GRAP).

“The Government had enough time to implement GRAP and systematically issue health advisories as per the action plan guidelines,” said independent researcher Aishwarya Madineni, who analysed the Central Pollution Control Board’s AQI readings. “However, the effort to create public awareness and alert the citizens to safeguard their health only happened after reaching an emergency situation.” 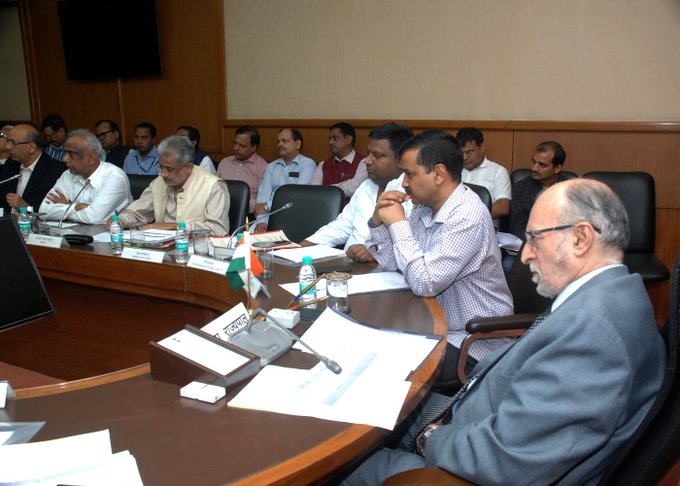 A plan ready to be implemented–except it was not

After Delhi witnessed its worst smog in 17 years in 2016, the CPCB, under directions from the Supreme Court, submitted the GRAP to address the air-pollution crisis gripping the national capital region, particularly in winter.

While the ministry of environment, forests and climate change cleared the GRAP on January 12, 2017, the plan received approval from the nodal Environment Pollution Control Authority on October 18, 2017–10 months later.

An AQI reading of over 500 is considered to an “emergency” and involves a shutdown of most outdoor activities. These measures are not new to authorities–they were recommended by a Indian Institute of Kanpur (IIT)-Kanpur report submitted to the Delhi government in January 2016, as IndiaSpend reported on November 10, 2016.

What the government should have done but did not

Air quality in Delhi began to dip from “moderate” to “poor” in the first week of October 2017 and proceeded to worsen.

Apart from curbing traffic, enforcing pollution standards on power plants and sprinkling water to curb dust, the government also should have made citizens aware of pollution levels using social media and mobile apps.

With the start of Diwali, air quality considerably worsened. From October 17 to November 6, 2017, the region recorded “very poor” air quality, 12-15 times above WHO limits, as we said.

On Diwali day, October 20, 2017, CPCB monitors in the national capital region recorded “severe” levels of pollution with an AQI reading of 403–16 times above WHO limits, suggesting poor implementation of the SC ban on firecrackers.

Over the last three weeks, government authorities, as per their own plan, should have also issued health advisory alerts for vulnerable populations or young children and senior citizens, banned use of diesel-run generators, raised parking fees, increased public transport services, and banned the use of firewood and coal.

Why GRAP cannot work unless various agencies work together

To be successful, most components of the GRAP require concerted and coordinated efforts from various agencies and bodies spread across the national capital region (NCR) and neighbouring states.

“GRAP has an ambitious set of measures under each category of alerts to be issued with action extending to Haryana, Punjab and Uttar Pradesh,” said Madineni. “Yet, the system does not mention a proper mitigation plan for addressing crop fires across the NCR states, to which the evidence clearly attributes a 25% rise in the pollution levels. The fireworks ban for Diwali was also a complete eyewash with little or no implementation bringing us to the emergency situation we are in today.”

Govt to Soon Share Consent Form with Citizens on 'Prospective' Sharing of Aadhaar for Future Schemes...
Love Jihad Case- Hadiya Says She is Muslim, No One Forced Her to Convert to Islam
Assam - Rat-hole mining continues unchecked in forests
A Quickie For Mr. Mahesh Murthy #FOS #Gender #Chrisgayle