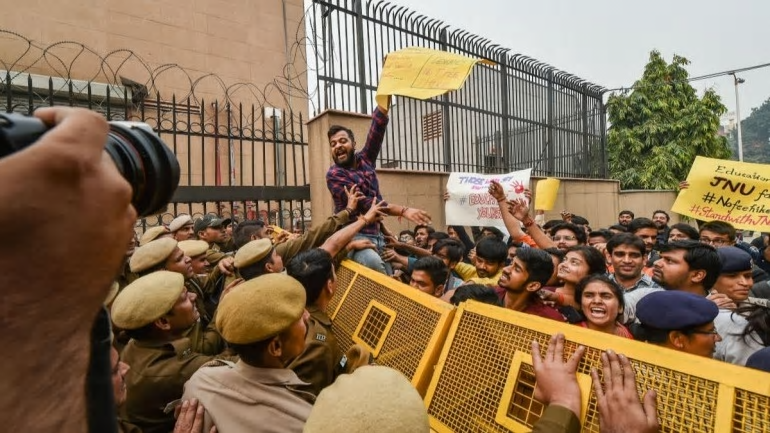 The Delhi Police lodged two FIRs on Tuesday in connection with the protest by JNU students.(Photo: PTI)

The Delhi Police lodged two FIRs on Tuesday in connection with the protest by Jawaharlal Nehru University (JNU) students over a hostel fee hike, even as the students’ union demanded that no administrative or legal action be taken against the protesters.

At the Banaras Hindu University, some students have been staging a sit-in outside the vice-chancellor’s office against the selection of a Muslim professor in the Sanskrit faculty.

And the two students who began a hunger strike on Monday over the suicide of Fathima Lateef, a woman student at the IIT-Madras, called off their strike on Tuesday after the Chennai Police questioned three professors in connection with the case.

The Delhi Police lodged two FIRs on Tuesday in connection with the protest by JNU students. One FIR was registered at the Kishangarh police station, while another was lodged at the Lodhi Colony police station, police said.

JNU student’s union on Tuesday said woman students were manhandled by male police personnel during a protest on Monday. They alleged that they weren’t just roughed up but also groped.

The union, represented by its president Aishe Ghosh, said the ongoing protests against increased hostel fees were for a just cause, and demanded that all notices served to students on and outside campus, FIRs included, be withdrawn immediately.

“The manner in which the police handled the situation is very shameful. Even when there were women officers, we were groped by the male ones,” Ghosh said.

She said JNU students wouldn’t relent without a complete rollback.

During their clash with the police, the students alleged that they were baton-charged by the men in uniform. However, top police officers denied using force.

According to the police, nearly 30 police personnel and 15 students were injured during the eight-hour protest, in which thousands of students from different universities across the national capital took part. There was heavy deployment of police and paramilitary personnel outside the main gate of the JNU campus, even before the march commenced. Water cannons and PCR vans were also stationed outside.

The JNU approached the Delhi High Court seeking contempt action against its students and the Delhi Police for allegedly violating a court order against holding a protest within 100 metres of the administrative block.

The JNU claimed that the students had grossly violated the August 9, 2017, order of the high court by holding a protest within 100 metres of the administrative block and affecting its day-to-day working, which has been disrupted since October 28.

The students are going to meet a high-powered committee formed by the Human Resource Development Ministry on Wednesday. The HRD set up a three-member committee to recommend ways to restore normalcy in JNU and initiate a dialogue with the students and the administration.

The Chennai Police questioned three professors in connection with the suicide of Fathima Lateef, a woman student at the IIT-Madras. The two students who began a hunger strike on

In an email to Chinta Bar, an independent student body, the dean of students accepted to constitute an external panel to examine the mental wellbeing of students within the next four months besides constituting a grievance redressal cell for each department at IIT-Madras.

On Monday morning, Azhar Moideen and Justin Joseph, students of the humanities department began their protest near the main entrance of the institute. The students demanded the institute sets up a panel of external experts comprising psychologists, mental health experts, educationalists and faculty of IIT-M to examine the mental wellbeing of the students and an internal inquiry to probe the allegations raised by parents of Fathima.

An assistant professor in the Sanskrit faculty of the Banaras Hindu University (BHU), whose appointment led to protests by a section of students, has said he is unable to understand why his religious identity suddenly an issue.

On the opposition by Akhil Bharatiya Vidyarthi Parishad (ABVP) over his appointment in the Sanskrit literature department, Firoze Khan said, “All my life, I learnt Sanskrit and I was never made to realise I am a Muslim, but now when I am trying to teach, suddenly it has become the only subject.”

A doctorate in Sanskrit, Khan is distraught by protests over his appointment. He said he doesn’t know Quran as much as Sanskrit literature. With protests continuing for over 10 days, he hopes he will be able to change his students’ mindsets