Ashes to ashes: Matang women sift through funeral pyres to earn their livelihood; it’s killing them

The mourners gather around the dead body. One of them sets the pyre on fire. The rituals of the funeral conclude, and one by one, people head out of the graveyard. But Lata Sathe, 52, stays put. She waits for the pyre to cool down. She inspects the ash accumulated under the pyre, and with the help of a few other women, starts the search for a saleable item in it.

Sathe hails from the Matang community, a subsection within Dalits, but the most deprived one. While Dalits aim to break away from the work assigned to them by tradition, Matang women are still making their ends meet by segregating ashes in the graveyard. There are close to 300 of them in Nasik city, 150 kilometers from Mumbai; they have divided the 20 graveyards here among themselves.

Sathe frequents one of them. A pile of bamboos stacked near the gate, Sathe, along with 10 other women, arrives here at eight in the morning. A smoky rectangular concrete structure with a peculiar smell — space enough for 10 pyres — has been her life, she says. “I do not remember doing anything else,” says Sathe, draped in a worn out sari. “My mother and mother-in-law would do it. Now my daughter and daughter-in law have joined in.” 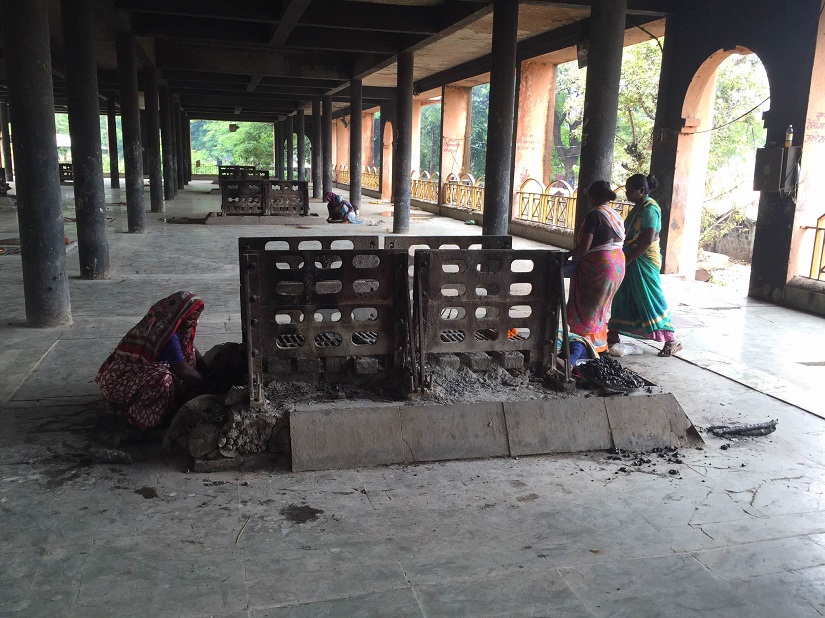 Hindus generally keep a metal or a bit of gold in the dead body’s mouth. The challenge is to find that in the ash. In case of a woman, Sathe is on the lookout for earrings or bangles as well.

A couple of women fill up a few buckets of water and pour it in the pit under the pyre. Hunched over, Sathe crawls under the pyre, ankles dipped into the water full of the burnt body’s ash. She cleans up the pit, fills her buckets and vessels with the ash water and then strains the water out before proceeding to the Godavari River just across the graveyard to clean up the ash, in which she hopes to find something worth selling. Whatever they find, is split among the women. “I end up making 80-100 rupees a day,” says Sathe, who has two unemployed sons, and a paralysed husband. Her daughter is married. “If nothing else, we pick up wood for the stove or clothes left at the graveyard. The sari I am wearing is from this very place.”

Sathe’s friend Sangeeta Ranshinge says when her eight-year old boy cries for a chocolate, she gives him the offering of the funeral. “What else can I do?” she asks. “That is the only way I can get something sweet for him.”
Generally, people tend to have a bath after visiting a graveyard, which is why Sathe, who spends most of her day there, is treated like an untouchable by the society. “I feel the humiliation at every juncture,” she says. “Even some of my relatives do not accept water from my hands.”

Cast away from the society, they even have their separate colonies, Matangwada. A kilometer’s distance from the graveyard, Sathe’s Matangwada is densely populated with 500 people. Cramped, poorly lit one-room houses clutter the society, as kids optimise the gaps running between the houses to play hide and seek. One has to bend the head to enter a house, where clothes hang at eye level. The house is damp, for there has been a sustained drizzle in the morning and the roof is leaking. The men in Matang community are engaged in casual labour or make money by washing cars. The average educational level is no higher than Class Four. “I do not think I have ever purchased rations sufficient for even a week (at a time),” Sathe says. “With the money we make, education for our kids is a long shot.”

Activists have been demanding rehabilitation and alternative employment for Matang women. Vishwas Kamble of the Maharashtra Matang Social Organisation has conducted protest marches in Nasik and elsewhere. “It is a tragedy people have to earn a living like this in the 21st century,” he says. “All the talks of development are cosmetic. Real development cannot happen if we keep neglecting the deprived.”

In February 2014, the previous Maharashtra State Government had assured in a letter that a meeting had been held regarding the rehabilitation of Matangs — whose numbers are just under 30 lakhs as per the 2011 census — and the decision to employ them as sweepers or cleaners at government offices, gardens and so on had been taken. The expected time of enforcement was estimated at one month.

Just before that, through Annabhau Sathe Economic Development Corporation, the state had provided 30 Matang women with a loan of 50,000 rupees each. It was a pilot project. But due to miscommunication, the women thought it was financial aid, not a loan. They only realised they were expected to repay the money after receiving notices for defaulting on payments. When Kamble briefly met the current chief minister Devendra Fadnavis, he was assured that the matter of the Matangs’ rehabilitation would be looked into. Rajkumar Badole, cabinet minister for Social Justice and Special Assistance, said he has chaired a few meetings regarding this issue and the GR for the same would be released soon.

In the meantime, Sathe is waiting for the night of the new moon. One of the other modes of income for Matang women: They beg once a month, on the night of the new moon, a superstition prevalent in rural Maharashtra.
According to the superstition, family members of any person who is sick, not doing well in life, or supposedly possessed by negative powers, give away food, oil, cereals, grains etc by mixing it with the person’s nails, hair and so on, to Matang women. The belief is that the supposedly cursed person would be rid of it and the negative forces would be transferred to the Matangs, through the nails or hair, along with the food.

Sathe says she segregates the food material and washes it before the family consumes it. But there is a huge hygiene issue here, for the food mixed with body hair or nails can only be cleaned to an extent. Many a time, the food given away by villagers is rotten. A doctor advised Sathe to avoid it when she was down with stomach upset, and asked her to stay away from the graveyard as well. Constantly inhaling the smoke is dangerous, she was told.

But, Sathe says, she would not even make the paltry sum of money that she now does, if she renounces her “job”. “If I continue, I will die of a disease,” she says. “But if I do not, I will die of hunger.”http://www.firstpost.com/living/ashes-to-ashes-matang-women-sift-through-funeral-pyres-to-earn-their-livelihood-its-killing-them-3015210.html