Asifa and the legacy of rape as a political tool #Vaw 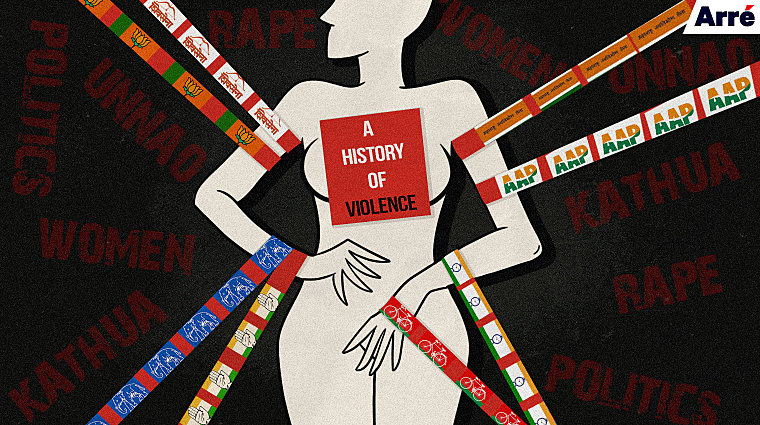 A tool of war

Unlike the Dec 16 Delhi and Shakti Mills cases, the rape and murder of a eight-year-old girl from Kathua was not merely driven by bestial desires. The assault on Asifa marks an unabashed infliction of sexual violence as a tool of war – reminiscent of some of the most disturbing phases of history.

Today, as the embers of simultaneous protests across country, over the rape and murder of eight-year-old Asifa continue to smoulder, I am reminded of a 68-year-old story by Saadat Hassan Manto. The short story, “Thanda Gosht” (Cold Meat), is set against the backdrop of the Partition, and treats the concept of the rape of women from the “other side” with a kind of effortlessness that borders on spine-chilling. Ishwar Singh, the male protagonist, returns after a “rioting” expedition to his wife Kulwant Kaur, who begins to suspect he has had an affair. She stabs him.

‘She was dead, Kulwant, it was a dead body… cold flesh… Please hold my hand.’
Kulwant Kaur put her hand over his. His hand was colder than ice.”

In his dying confession, Ishwar Singh admits to raping a dead woman he has abducted earlier. The act continues to haunt him, long after he returns. But it is an example of the nonchalance with which the bodies of women who don’t belong to your caste, class, or community – in times of strife or not – are treated as fair grounds for defilement.

Whether you look at Manto’s short stories or Bapsi Sidhwa’s novel Ice Candy Man or Amrita Pritam’s Pinjar, one deeply disturbing theme in Partition literature dealt by writers from both sides of no man’s land, is the use of rape as a tool of war. It is the crudest, the most bestial reflection of the psychology of a mob that has been brainwashed into believing that the most effective way of “teaching ‘them’ a lesson” is by violating their women.

A child, who should have ideally been throwing a fit about her heavy third-grade bag, came face to face with the most demonic side of the human form, simply because she belonged to “them”, and they needed to be a taught a lesson. In Asifa’s case they were the Muslim nomadic tribe Bakerwals, who’d allegedly been having run-ins with the Hindus of Kathua over their animals grazing Hindu lands. The most audacious way the drunk-on-muscle-powerSanjhi Ram and gang found to assert their supremacy was to kidnap, drug, rape and murder an eight-year-old. To send a message to the other side that this is what we can do to your women and girls, if you don’t fall in line. Dishonour them. Dishonour you. Because the flimsy honour of a man in a conservative society invariably rests in a vagina.

Using women as soft targets has been an age-old strategy in the war of supremacy of one tribe, one community, one kingdom over the other.

But this sentiment should hardly come as a surprise to us – it strikes very close to the Hindu Yuva Vahini’s, a youth militia outfit founded by Uttar Pradesh chief minister Yogi Adityanath. “Aaj zaroorat is baat ki hai ki unki ma, behenon, aur betiyon ko kabr se nikaalo aur unke saath balaatkar karo (The need of the hour is that we should drag their mothers, sisters, and daughters out of their graves and rape them),” exhorted a local leader at the outfit’s rally in 2011. Because rape is how you keep those men in check.

Using women as soft targets has been an age-old strategy in the war of supremacy of one tribe, one community, one kingdom over the other. Pillaging enemy lands and defiling enemy women were the unwritten norm of kings and armies of the yore, including the medieval Hindu rulers, the Turks, the Mongols, the Mughals, the British and many more.

Unfortunately, an independent India has been unable to break free from this disgraceful legacy. There’s enough testimony of rampant rapes and murders throughout the communal rioting history of this nation right from 1947 through 1984 Punjab, 2002 Gujarat, 2013 Muzaffarnagar and beyond – all highlighting the perpetuation of sexual violence as a grisly political tool. In fact, Veer Savarkar, considered one of the founding fathers of Hindutva, encouraged Hindu men to consider rape as a political tool. In his 1966 Marathi book Six Glorious Epochs of Indian History, he wrote, “It was a religious duty of every Muslim to kidnap and force into their religion, non-Muslim women.”

And yet, what happened in Kathua – temple or not, marks a frighteningly new low for India’s oft-mutilated socio-political ethos.

For one, this wasn’t a case of a frenzied mob plundering and pillaging anything that came in the way. It was a premeditated act carried out with a specific purpose. Two, the vulgar confidence of the perpetrators in their political clout convincing them of their comfortable places above the law – at least in their heads, couldn’t have possibly come from nothing. Even as active attempts are being made by certain sections to de-link this rape from the political milieu, how does one overlook acts like formation of Hindu Ekta Manch with at least two BJP leaders on their side or the obscene protest of local lawyers – byproducts of ugly arrogance?

It is somewhere in between these lines that the Unnao rape case can be read as well. Of course, the power-abuse dynamic in the Unnao victim’s case played out differently with the tainted MLA flexing all the muscle he could to avoid arrest. But when was the last time you saw ruffians wielding tirangas in support of a rape accused?

Which is why, Kathua and Unnao are different from what happened in Delhi, from what happened in Mumbai. Unlike Nirbhaya or the Shakti Mills case, these weren’t driven by individual bestial desires of psychos. The bestial desire was communal (even though the Unnao drama is unfolding as a politics-over-rape story.) Asifa is a horrifying example of unabashed dehumanisation of the feminine form; the utter refusal to look at her not as a fellow human but as a chink in the enemy’s armour which must be exposed and exploited to bring him to his knees.

A Partition chronicler once observed, “All wars are wars of men… In the slaughterhouse-circus called war, irrespective of which side wins, women always lose.” It is a sordid irony that even as Partition means little more than a history book chapter for most millennials, these lines ring eerily true.

We may not be in a war-like situation. And yet for lakhs of women living along the faultlines of middle- and lower-middle India, this is a war with no end in sight.

This article has originally been published on Arre.

14 years in jail if you kill cow, 2 if you kill people: Judge in BMW case
Farmers Observe Hool Kranti Divas in Solidarity with Adivasis all over India
CAA Protests- Activist Deepak Kabir arrested for asking about missing protesters, paying price for...
India - Babu-neta-builder nexus killing our cities and people