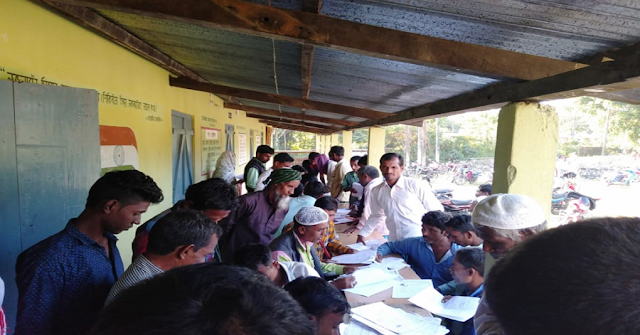 In a detailed note, well-known civil rights organization, Citizens for Justice and Peace (CJP), which has taken up the cause of lakhs of people in Assam who are in danger of being permanently declared “foreigner”, has said that, with less than 10 days to go for re-submitting claims for citizenship before the National Register of Citizens (NRC) offices, the future of nearly 32 lakh people is at stake.
Pointing out that nearly 80% of the claim forms is “yet to be submitted” before the deadline, December 15, the note says, already, some people who have begun smelling “a conspiracy in deliberately setting an impossible deadline.”Text of the CJP note:

Even as the December 15 deadline for filing NRC Claim forms looms large, nearly 32 lakh people are yet to file their claims. Over the last 73 days, only 8,10,000 people have been able to complete the process. That comes to approximately 11,095 application filed per day. Given how now there are less than ten days left, out of which only five are working days, it is obvious that the remaining people will not be able to complete the application process in time!
A total of 40,07,707 persons failed to find their names in the NRC final draft that was published on July 30, 2018. This means, more than 80 percent of the people whose names had not been included in the NRC yet to submit their applications as a part of the claims and objections process. The fast approaching deadline is only casting a dark shadow over their future. What will happen to those who fail to submit their claim applications within stimulated period?
Over four million people have been left out of the NRC draft, most of them from socio-economically backward communities. Now CJP, drawing from its previous experience in providing legal aid in Gujarat, will step in with a multi-faceted team of lawyers and volunteers to ensure that these people receive a fair chance while filing claims across 18 of the worst affected districts. Your contribution can help cover the costs of a legal team, travel, documentation and technological expenses. Please donate generously here.

According to Prof Taizuddin Ahmed, who teaches political science at Bhawanipur Anchalik College, there are two possibilities: If you submit claim forms and your name remains out of final NRC your case may be referred to Foreigners Tribunal; or if you don’t submit your claim form there is high probability of being declared ‘foreigner’

Prof Ahmed, has been burning the midnight oil working closely with CJP’s community volunteers and other youth of Barpeta and Baksa district to help people in filling up NRC claim application forms.

CJP’s work gets appreciated
Dr Hamida Haque, who has the distinction of being the first Muslim woman to hold a PhD in Mathematics, says, “The situation is deeply disturbing. But what’s worse, is that very few young and educated people are fully aware of how grave it has become.” She adds, “Had all people been working with the same passion and commitment at CJP community volunteers and volunteer motivators, we would have been able to mitigate the crisis to some extent by now.”
Prof Abdul Mannan who teaches Statistics at Gauhati University says, “Today we find ourselves amidst an unwarranted situation. Everybody in the state and from across the country, should come forward to lend a helping hand to ensure 100% of the claim forms are submitted within the stimulated period. Otherwise the poor and distressed people will have an uphill task ahead.” Appreciating work of CJP, Prof. Mannan says, “It is time to have a rethink. If someone can’t work on the ground like CJP Volunteers, they should have at least support CJP for their noble work.”
Meanwhile, there are some people who smell a conspiracy in deliberately setting an impossible deadline. Advocate Shaizuddin Ahmed of Gauhati High Court says, “It is greater conspiracy to drop a large number of people from final NRC and thus declare them as stateless. Everyone should understand and work to overcome this conspiracy. If others would have worked on the ground like CJP, then we could have averted this catastrophe.”
Assam’s arithmetic
At present there are 25 volunteer motivators along with 500 community volunteers who are working hard on the ground for filling claim applications every day. But the number is not enough. A volunteer can’t fill up more than 15 forms a day, helping cover anywhere between 40 to 50 applicants given how each form can cover more than one applicants. This is because if one person’s citizenship is under the scanner, it could affect others in their family. Therefore, 500 community volunteers can help cover only 40×500= 20,000 applicants a day, which in itself is a formidable feat!
This also means during the last 73 days CJP community volunteers alone have covered 14,60,000 claim applications. But then why is it that only 8,10,000 claim applications have been submitted till 4th December, 2018? It is because of mainly two reasons.Bureaucratic hurdles
First, compiling documents for claim applications is not easy. The SOPs that finally came out after Supreme Court hearing on 1 November have created some complications for filling claim applications for the updating NRC. We know that most people were dropped from the final draft of the NRC because of linkage certificates. It means the Legacy documents or List A documents or the documents prior to 1971 of these people are beyond doubt. But the problem is that if the Legacy documents is in the name of someone’s father, grandfather or great grandfather it is tough establish his linkage with the Legacy Person.
Moreover there are 7 list B documents viz; 1) Birth certificate, 2) Land documents, 3) Board/ university certificates, 4) Bank/ LIC/ post office policy documents, 5) Circle officer / lot mandal / Panchayat secretary certificates, 6) Voters list, 7) Ration card and 8) Others. Among these seven documents, many are not easily available for economically weak and uneducated people, women and children.<
Though the voters list is a universal documents it excludes the population under 18 years of age and married women can’t connect with their inherents as father’s name is not available with the name of a married woman in the voters list. Though the ration card of a family could have been used for the linkage documents, not a single ration card has issuing date with the seal and signature of the issuing authority. So, all ration cards submitted so far have been rejected all over the state.

But, the officials of NRC Authority from top to bottom rejected Panchayat secretary certificates who failed to submit additional document to that of Panchayat secretary certificates. On December 1, Prateek Hajela, state coordinator, NRC, issued an additional order to all DRCR of the State, where he has maintained that the married woman, who have no other documents to Panchayat secretary certificates should be verified as per Supreme Court directives.
But, an overwhelming majority of ground level officials appear to be quite ignorant about the Supreme Court directives. So, people are afraid about the situation that a document rejected once may not be acceptable again. So, everyone searching for the alternative documents which may be a substitute to Panchayat Secretary Certificate. But the door is closed for such alternative as in SOP it is strictly mentioned that any documents issued after August 31, 2015 will not be acceptable as List B documents for claim applications.When Team CJP was monitoring the NSK centre it found in Narayanpur NSK in Baksa District that one LRCR was rejecting a land document of 1969 only because of the copy of the document was issued in 1987. Bedanta Bora, the LRCR of the opinion that the document was issued after 1971 so it can’t be a legacy document.

At that time Shanti Ranjan Mitra of the Forum for Social Harmony, who was part of the CJP delegation asked, “I have passed the matriculation examination in 1965. I had lost my Admit card of that Examination. I have bring collected duplicate copy of that Admit card only on yesterday. Is it a document of 1965 or 2018?” Shanti Ranjan Mitra asked the question repeatedly, but the LRCR didn’t cite a single word.

The food fight is on!
Still, the distressed people have not given up their efforts to collect alternative documents. The community volunteers of CJP along with hundreds of educated youth, students and informed people are extending helping hands to gather alternative documents for claim applications.

Alert farmers foil plot to unleash violence at Singhu, catch man sent to shoot union leaders
Treat suicide survivors with Compassion, Not with iron hand
An Appeal for Young Volunteers to work in the Narmada Valley
The Lessons of Bhima Koregaon Case : No Bail, Only Jail