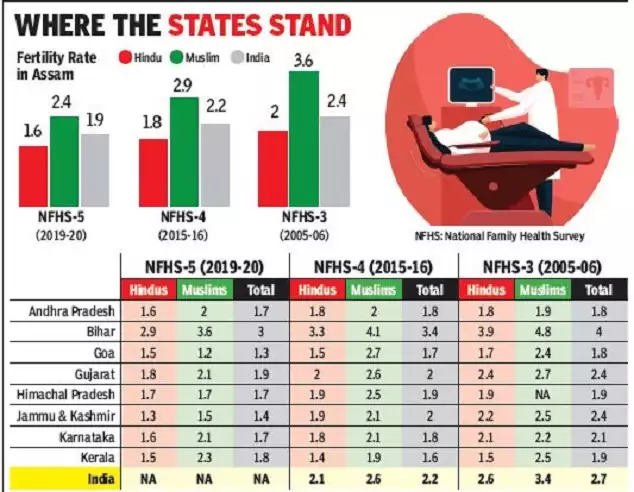 Assam CM Himanta Biswa Sarma has been under the heat of criticism since the past week when he called for the states “immigrant muslim” population to practice birth control and family planning in order to prevent further poverty and pressure on land. He said the State government will work towards educating the women of the community to tackle the issue of family planning effectively. This statement was given in the context of CM Sarma’s reaction towards the criticisms of his government’s drive to free state-owned land from encroachment. He also appealed to  organisations such as AIUDF (All India United Democratic Front) and AAMSU (All Assam Minority Students’ Union) to encourage practices of population control among the Bengali-Muslim community. CM Sarma’s statement has been condemned by the National Federation of Indian Women (NFIW). According to the NFIW, this statement by the CM is not just communal in nature but also puts the onus of population control on the women of the community, which goes on to reflect his regressive approach towards the subject of family planning. An unconditional apology has also been demanded by the NFIW to be issues to the Bengali Muslim community of Assam, especially the women.

The problem of overpopulation in India is often given a communal twist where Muslim communities are usually portrayed as people who do not believe in family planning and would rather keep having children in order to further their religious strength. Interestingly,“The Population Myth: Islam, Family Planning and Politics in India”, published in February 2021, authored by former election commissioner S.Y. Quraishi, goes on to bust certain prevalent myths associated with population and Islam. In his book, Quraishi throws light on the skewed logic behind the belief that Muslim communities of India bear children with the aim to outnumber the Hindu population of the country. In his conversation with Times of India, Quraishi went on to bust three common misconceptions about Muslims in India regarding acceptance of family planning, polygamous marriages, and the myth of organised conspiracy by the muslims to outnumber Hindu population of India.

Drawing from the statement made by the CM and the NFHS-5 report, the underlying bias of the authorities in charge of governance is evident. Such statements targeting a specific community tends to look at problems of overpopulation and poverty through the lens of black and white instead of exploring the grey area of contradictory statistics. Owing to the pre-existing environment of communal and xenophobic tensions, such statements need to be filtered through a sieve of unbiased rationality and political correctness.