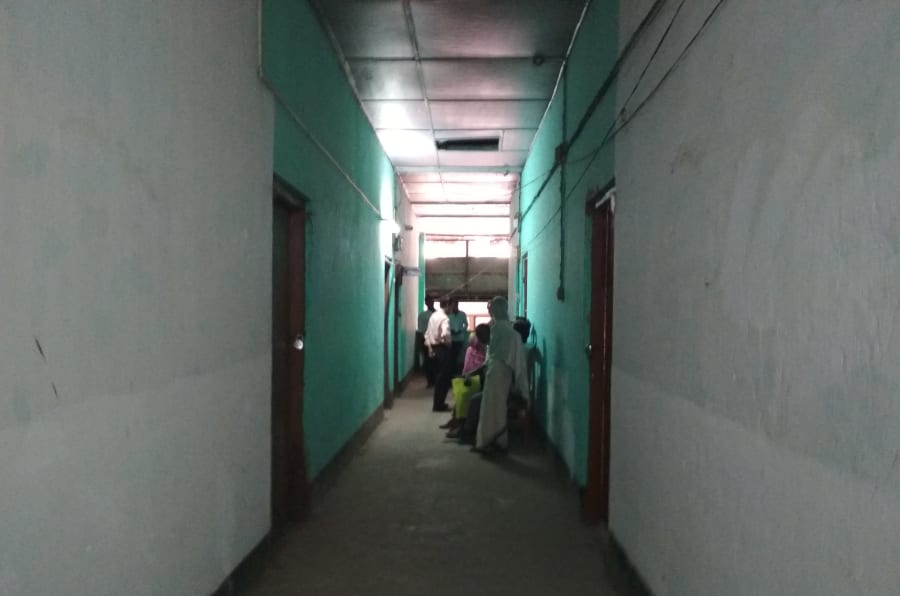 ROHINI MOHAN FOR HUFFPOST INDIA
Inside Barpeta’s Foreigners Tribunals, where those whose nationality is in doubt must prove they are Indian citizens.

BARPETA, Assam — When Fazlul Ahmed came home from court every evening, his wife Haseeba could tell in an instant how his day went. If it was good, he would hand her his heavy bag of files, and ask for tea. If it was bad, he would call out to their children—he needed their bright madness to dispel the dark clouds.

As dusk fell on August 2, 2018, Ahmed yelled, “Farzeena!” even before he opened the gate. As his three-year-old daughter ran towards him, Haseeba watched. “I wonder who was declared a foreigner today,” she said.

An advocate in Barpeta district, 40-year-old Ahmed has been working in Foreigners Tribunals for about eight years, defending people whose Indian nationality is in question. It is not a long career, but it is intensely personal to Ahmed – his first case in the tribunal was his own. The second case was his mother’s. The third, his father’s. All were alleged as doubtful voters, but by 2014, he managed to clear them all as Indian.

After delivering victories for most of his clients initially, since 2017, he has found his success rate plummeting. “The tribunals are declaring more and more people foreigners,” Ahmed said. “Nothing I do and none of the papers we show seem to convince the judges.” In the past year, all of his over 40 clients – largely poor Bengali-speaking farmers who could barely afford the bus fare to come to court – were declared foreigners.

Nothing I do and none of the papers we show seem to convince the judges.

Guilt-ridden, Ahmed blamed himself. “Maybe I was not a good enough lawyer,” he said he began to think. But when he observed other hearings in the eleven tribunals in Barpeta district more closely to take pointers, he was appalled. “Every other lawyer was also failing!” In FT No. 3 for instance, he counted 25 judgements in the last 60 days – every single one declared the petitioners as foreigners.

Fourteen lawyers this reporter interviewed across the 11 foreigners tribunals in Barpeta confirmed Ahmed’s observations. Three others who work in Tezpur, and three lawyers in Guwahati also agreed. They described the process variously as “heart breaking”, “arbitrary”, “too strict”, “politicised” and “intentionally unjust”. One senior litigator said he stopped taking tribunal cases because he was miserable. “Legality and documents don’t seem to matter in the tribunals,” he said.

Legality and documents don’t seem to matter in the tribunals.

There are 100 foreigners tribunals in Assam; of these 64 were set up in 2015, to bolster the enormous exercise of determining illegal immigrants in the state through the National Register of Citizens (NRC). Under an accord signed at the end of a massive anti-foreigner agitation in Assam in the eighties, anyone who entered the state after 24 March 1971 – the day before neighbouring Bangladesh declared independence – is considered an illegal immigrant.

The bureaucratic NRC and quasi-judicial tribunals may seem like parallel systems, but NRC’s state coordinator Prateek Hajela agreed that “they feed into each other”. In the final draft of the NRC released on July 30, 2018, of the over 40 lakh people left out, more than 2.48 lakh applicants were automatically put on hold: declared foreigners, doubtful voters (controversially disenfranchised in 1997 and 2005) with cases pending in the tribunals, and all their descendants and siblings.

Anyone the tribunal declares a foreigner—and his/her family – has no chance of appearing on the citizenship registry. The border police of Assam (the only state to have one such force) apprehends such foreigners, keeps them in one of the six detention camps in the state, and finally deports them.

When the stakes are so high, how the tribunals operate becomes significant.

HuffPost India has asked the Home and Political Department of the Assam government, under whose jurisdiction foreigners tribunals fall, for annual data on the number of declared foreigners in the past five years. When a response is received, this article will be updated.

When the stakes are so high, how the tribunals operate becomes significant.

‘What’s going on is really unfair’

Three tribunals established in 1985 are in state-owned buildings adjacent to the crumbling moss-coated sessions courts. Dozy policemen hang around, junior lawyers woo clients in parking lots, and petitioners spend the long waits sipping tea or chewing supari. Four of the eight tribunals set up in 2015 are simply rented rooms in a fluorescent-green shopping complex with a wide Samsung board from an electronic appliances showroom.

The tribunals are governed by the Foreigner’s Act of 1946, which places the burden of proof on the accused person to prove that she is an Indian citizen. Most D-voters are poor and illiterate people of Bengali-origin, suspected of having entered illegally from Bangladesh. When they do have documents, they furnish yellowing and fraying pre-1971 voter lists of their parents, refugee cards in some instances, and land records.

Issued by different authorities in Bengali, Assamese, and English, written in ink, or printed, stamped and verified repeatedly over various phases of anti-immigrant programmes in Assam, they are a historical account of an unstable life in a densely populated multi-ethnic region that saw much strife for decades.

Nine of the eleven tribunals in Barpeta are sparsely furnished, but heavily guarded by the border police. A few tables, stacks of plastic chairs. Some rooms have fans, some don’t. There are CCTVs everywhere.

In foreigner tribunal No. 6, sitting on a plastic chair in the middle of a room that serves as the court, the member quibbled about 40-year-old Abdul Saleem’s father’s age. “Nourul Islam is 30 in the 1951 record, and 95 in the 1966 electoral roll,” he said in Assamese.

Saleem shrugged. “It is a clerical error, please,” his obsequious lawyer said in English. “Obviously, it was 45.”

“What was your father’s age when you were born?” the member asked Saleem, who looked petrified and raised his fingers to calculate.

“You don’t even know? Nourul Islam is a projected father,” said the member, handing the papers back to Saleem.

From 1985 to July 2018, tribunals in Barpeta have declared 2,284 people foreigners — 287 of them, after long retrials in the higher courts, were rejudged Indian. Over 25,000 cases are pending in the tribunals here today.

A senior border policeman posted in the tribunals for a year now, watching proceedings all day, shook his head. “Things are terrible here. What’s going on is really unfair,” he said. “These poor people they’re declaring as Bangladeshi – they are all Indian, all Indian.”

These poor people they’re declaring as Bangladeshi – they are all Indian, all Indian.

‘Our hands are tied’

Until 2015, tribunal members were retired district court judges or additional district judges. After more tribunals were added, any practising lawyer over 55 years of age on 1 April, 2015, and with 10 years of experience, was eligible.

“Earlier, the tribunal members wouldn’t bother much about small clerical errors,” said advocate Peer Jahan, who has represented over 100 ‘doubtful voters’. If Ayyub was spelled Ayub in two different documents, the member would check to see if the house number matched. “But today, in the same situation, the new member will declare Ayub a foreigner, because of a clerical error that is not his fault.”

Members, as the adjudicators in the tribunals are called, are on two-year contracts. The Assam government’s department of home and political affairs pays them a monthly salary of Rs. 80,000. On 21 June 2017, nineteen members were dismissed for their “under performance in the last two years”. More than 15 others were warned strictly to increase their efficiency. In a petition in the Supreme Court, some of them have challenged the non-extension of contract as “illegal and discriminatory action”.

When asked about political influence, a current tribunal member in Barpeta, while turning down this reporter’s request for an interview, said, “Our hands are tied, madam. We are under a lot of pressure to show good results.”

Our hands are tied, madam. We are under a lot of pressure to show good results.

Hafiz Rashid Ahmed Choudhury, senior advocate at the Gauhati High Court said the powers of the tribunal members are actually limited. “They are supposed to only give their opinion on whether a person came after or before 1971, not give judgements, call for revoking ration cards, or have the police detain anyone.” But this happens widely.

If people who are served notices fail to turn up for trial, the tribunal declares them foreigners in their absence. This makes them liable to be jailed in detention camps. In a report on the whole process, activist and former member of the National Human Rights Commission Harsh Mander writes that since there is no formal agreement between India and Bangladesh governments for India to deport persons declared foreigners, “At present, it appears that they may actually be detained for the rest of their lives.”

Lawyers and activists insist that tribunal members should at least be sourced from the Assam judicial service. An advocate for 20 years in Barpeta, Montaz Ali said that today, people could only hope for justice through appeals in the high court and Supreme Court. “But how many can afford that?”

Many tribunals don’t have public prosecutors.

Geeta Barman (name changed) sat on her haunches at the bottom of the unpainted stairs of the newer tribunals. The humidity had carried the vermillion to the tip of her nose in a red dollop, but she did not notice. She and her three brothers were doubtful voters.

The men submitted school admit certificates to establish a link to their father, born in India in 1948, and therefore within Assam’s 1971 cut-off date for Indian citizenship. Having never gone to school and married off as a teenager, 32-year-old Geeta had only one document, a certificate from the headman of her father’s village certifying that she was her father’s daughter and moved to her husband’s village after marriage.

“The judge”—as many people call the tribunal members— “asked for my father and brothers to come as witnesses today.” A farm labourer in a village 60kms away, she has already spent Rs.12,000 on lawyers, documentation and transport. “My father is 70 and can’t walk, so we hired an auto to bring him.” It would be worth it if she could prove she’s Indian.

Later that evening, when this reporter met the father, he burst into tears. “The judge asked me if Geeta was my daughter. I said yes. Then he asked me her age. I said maybe 25.”

Since Geeta is 32, and not 25, she was declared a foreigner.