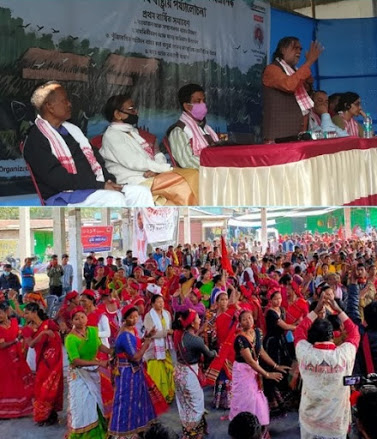 The Assam-based youth and farmers organizations, including the Youth for Bokakhat and Jeepal Krishak Sramik Sangha (JKSS), in alliance with the civil rights organisations National Alliance of People’s Movements (NAPM) and Delhi Solidarity Group (DSG), have insisted that that state authorities must immediately put a stop to continuing evictions in the name of expansion and addition of lands to the Kaziranga National Park and Tiger Reserve.
Participating at a national-level discussion on Scientific Conservation and Rights of People in Kaziranga, the meet, which was held in Kohora at the centre of the forest administration of Kaziranga National Park (KNP), opposed the what it called “statist exclusionary regime of forest governance” even as asserting that the indigenous people of Kaziranga have the right claim over “the forest, its protection and conservation, and its governance.”

The meet began, which with a display of the colours and sounds of the indigenous people of Kaziranga, saw indigenous, tribal and adivasi peasants and farmers affirm the right to their land, with villagers saying, “In the face of this adversity, we will not give up, but we will struggle and struggle and struggle”.
Among those who addressed the meet included Prafulla Samantra, winner of the Goldman Environmental Prize, dubbed as Green Nobel, for upholding rights of adivasis; Santanu Borthakur, human rights lawyer from Guwahati; Vasundhara Jairaith, a faculty mr of Indian Institute of Technology, Guwahati, who specializes on issues related to development; and Amit Kumar, a DSG activist.
Issued addressed at the meet included evictions in the name of expansion of the Kaziranga National Park and Tiger Reserve, growing militarization of the region; challenges posed by capital-intensive tourist economy on cultural and economic progress of the local people living in and around Kaziranga National Park; human-wild animal conflict; and non-implementation of the Forest Rights Act (FRA), 2006.

Samantara, who has led land rights movement in Odisha, stated that handing over key conservation initiatives to corporate or private entities has only led to loss of forests and human rights abuse of the locals.

Supporting the need to conserve Kaziranga by recognizing the rights of the people living around the National Park and acknowledging their key involvement in and contributions to the conservation efforts, he said, “In a democratic country, it is the people who are sovereign, and it was the duty of the state to protect their rights over their land and their lives. Kaziranga will survive only if the local people are recognized as the protector of forests”.

Santanu Borthakur, putting forth the legal and political frameworks to protect the rights of the communities, criticised the Assam government’s policies which led to alienation of various communities from their lands and natural environs, pointing towards “state repression on and arbitrary incarcerations of those who question such unjust policies.”

Calling for a serious rethink of the current extractive and exploitative model of tourism, Vasundhara Jairath expressed the need for an alternative approach that addresses the cultural and economic upliftment of the local people.

Representatives from evicted areas of Kaziranga, including Methoni, Haldibari, Banderdubi, Bortol, Borbil and Agoratoli, gave instances of “everyday hardships and hopelessness in the face of state repression”. Probin Pegu, secretary of the Jeepal Krishak Sramik Sangha, read out farmers’ leader Soneshwar Narah’s speech who has been allegedly targeted by the Assam government for participating in the all-India farmers’ protest on January 26 in New Delhi.

Pranab Doley, the proposed candidate from Kaziranga for the upcoming Assam State Assembly election for Bokakhat constituency, was welcomed with loud cheers, the beat of their drums, as their feet moved to its rhythm, in a celebration of their identity, an exuberance of joy and an assertion of their peoples’ power.

Doley said that everyone should take up the cause of the security and the rights of people living around the Kaziranga National Park who have been sacrificing their crops and livestock to feed wild animals of Kaziranga for long. He asked the Assam government to live up to its electoral promises of protecting the home, hearth and communities in and around Kaziranga, even as condemning what he called political conspiracy against farmers’ leaders of Assam such as Soneshwar Narah.

Considered by UNESCO as a World Heritage Site, the KNP is an important protected area in India. Surrounded by lush green Karbi hills and the majestic Brahmaputra, the region is home to diverse communities. Kaziranga’s fragile ecosystem supports rare fauna and flora which co-exist along with local communities and their sustainable lifestyles.

People of Kaziranga are being impoverished by a coercive conservation model that is tailored to expansion in tourism revenuesAn NAPM statement said, “Millions have been invested in sustaining militarisation alongside constantly expanding the territory of the National Park. Global conservation agencies such as World Wildlife Fund (WWF) have been pouring thousands of dollars as aid to protect endangered animals like the Royal Bengal Tiger. The conservation economy, however, does not include the well-being of the people living right next to the park.”
It added, “Over the last two decades, Kaziranga National Park expanded twice its size from 440 square kilometres to 883 square kilometres. This is done by displacing thousands of people from their lands. Such actions of the conservationists have been demonstrated in case of large-scale evictions from Banderdubi in 2013 and more recently from Methoni and Haldibari in 2020.”

The civil rights network said, “While conservation efforts by various national and international agencies have earned laurels and have been celebrated as worthy causes, the people of Kaziranga are being actively impoverished by a coercive conservation model that is tailored to expansion in tourism revenues instead.”

“Declaring 2020 as the year of Tourism and Rural Development, in line with the United Nation World Tourism Organisation, Park authorities have an elaborate expansionary plan to multiply revenue by switching from a 6-month to an 8-month to finally a year-long model of tourism”, it added.

According to NAPM, “KNP authorities claims of contributing to ‘rural development’ are vacuous in the light of a continuous onslaught on the lands, waters, crops and livelihoods of the rural communities, while only the urban elite and politically influential individuals seem to benefit from these models. The park bureaucracy and state government have taken no substantive responsibility in compensating communities for the loss of crops or even of lives by wildlife and instead seek to throw out communities to make way for wildlife.”

It underlined, “Despite the passage of the Forest Rights Act 2006 that guarantees right of Scheduled Tribes and Other Traditional Forest Dwellers to forests and its resources, FRA has systematically not been implemented in Kaziranga. As of 2019, Assam recognised 58,802 claims under FRA even as 12.4 percent of Assam’s population belong to tribal communities.”

The organisation added, “The Forest Department continues to play a huge role in the management of protected areas such as National Parks, Wildlife Sanctuaries and Tiger Reserves. This is violation of the rights protected and safeguarded in the FRA that seeks to undo the historical injustice done to communities living in and around forests.”

Faiz Ahmed Faiz - Kuttey by Swaang Songs #Protestmusic #Video
India - Holy Cow! Look at That Political Scenario
India - No Country for Dissent - `I am frustrated by the impotence of writers'
IIT-BHU May Offer A Course On 'Adarsh Bahu' #WTFnews