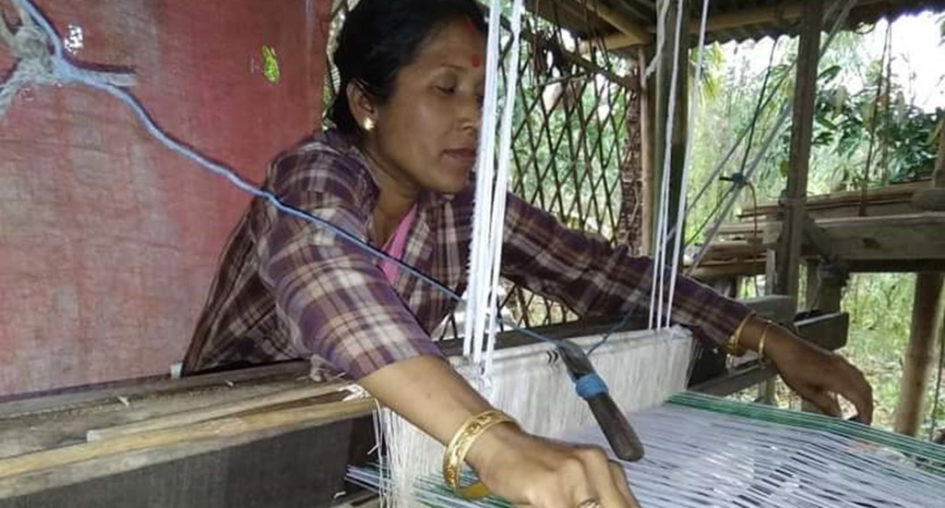 Traditionally adept at weaving, women around Kaziranga weave products with threads made from plastic bags, and cotton thread, to reduce plastic pollution and earn a livelihood

Since its reopening on 20 October, after nearly eight months due to the COVID-19 pandemic, the Kaziranga National Park in Assam has already clocked more than 1.10 lakh footfalls. The sylvan greenery, acres of open wetland, grassland and forests attract both domestic and international tourists in hoards.

Easily accessible and a four-hour drive from the state capital Guwahati, the Kaziranga National Park has the world’s largest population of one-horned rhinoceros, besides a large number of elephants, tigers and innumerable species of birds.

“Not every tourist is environmentally conscious or cares about nature. Though the park and the government have imposed strict rules, you will find plastic bags strewn everywhere, spoiling the sight of the park, besides causing problems for the animals,’’ said Rupjyoti Saikia Gogoi of Bocha Gaon village, who sells traditional crafts from her outlet Kaziranga Haat.

Residents of Bocha Gaon and other villages around Kaziranga also use plastic bags from shops and later discard them on garbage dump on roadsides. Rupjyoti Saikia Gogoi’s husband, who is involved in wildlife conservation, was worried about the hazards that the plastic waste could pose to the animals of the national park.

The Corbett Foundation, an organization dedicated to the protection of wildlife and their habitat, decided to address the problem. “We thought of using the plastic waste,” Naveen Pandey, deputy director and veterinary advisor of Corbett Foundation, told VillageSquare.in.

Considering the threat to animals and the unseemly sight, Gogoi decided to utilize the plastic bags in weaving. Towards this end, she started Village Weaves, roping in about 2,300 women from villages around Kaziranga.

Like most women of the northeastern states, Gogoi too knows handloom weaving. “We normally use cotton thread to weave our makhela chador or gamusa, traditional garments,” she said. “Sometimes we make thread from bamboo. So I started thinking of replacing bamboo threads with plastic threads.’’

She gathered around 20 women from her village, who went about collecting strewn plastic bags, cleaning and washing them thoroughly and then dried them completely. The cleaned bags were cut into thin strips and knotted at the ends to get long plastic thread.

On their looms for warp (long vertically placed thread on the looms) they used cotton thread and for the weft (horizontal threads) they used the plastic threads which were wound on bamboo shuttles. The different colored bags gave their hue to the products.

“Except for women from our state, others rarely wear makhela chador,” Gogoi told VillageSquare.in. “Foreign tourists only admire them, wear them for vacation photos but never buy them. So weaving them wasn’t very profitable.”

In addition to weaving, the women of the northeast can also make their own looms from bamboo available in abundance and repair them, unlike weavers of other states who get the looms made and repaired by loom-making carpenters.

“We suggested weaving of products other than the traditional saree and gamusa,” said Pandey. So, with changes in loom sizes, from six-meter long chador, the women changed to weaving 18”x12” table mats and 24” x 12” runner. A set of six table mats and one runner is sold for Rs 1,500 giving a profit of nearly Rs 700 per set.

Similarly, using cotton and plastic threads, the women weave other products such as wall hangings, doormats, hand bags, pouches, etc. The colorful plastic threads lending different shades to the products and purse-friendly prices have made these products very popular.

To popularize this concept of weaving with plastic thread, Gogoi trained women from neighboring villages. She wanted to empower women around her as she saw many women struggling to make ends meet. Since all the women know weaving, they could be trained and taught about color combination in a few days.

“Earlier I would earn around Rs 5,000 a month and now I easily make Rs 10,000 to Rs 12,000 a month,’’ Kashmiri Saikia Gogoi, one of the women using plastic waste to weave products, told VillageSquare.in.

A graduate in Assamese language, 28-years-old Malavika Baruaa Gogoi took weaving seriously only after the training. “Now I enjoy weaving different products, weaving for only two or three hours a day,” she said. “I don’t have to worry about marketing as Rupjyoti takes care of the sale. We get our money and love the appreciation from buyers.’

“In Assam, alcoholism is prevalent amongst men. With the money they earn by weaving these products, women can easily spend the extra money on children, on buying clothes, etc. without having to ask the alcoholic husband for money,” said Pandey. “So more women are joining this initiative.”

Surekha Kadapa-Bose is an independent journalist based at Thane. Email: [email protected] Views are personal.

Press Release - Stop distribution of ' CowUrine" base medicine in Kashmir
Why the NDTV Ban Was Put On Hold
Modesty of dress and Indian culture
Ashok Dhawale: The Good Doctor #mustread