At 75, will India embrace the logic of freedom or Partition? 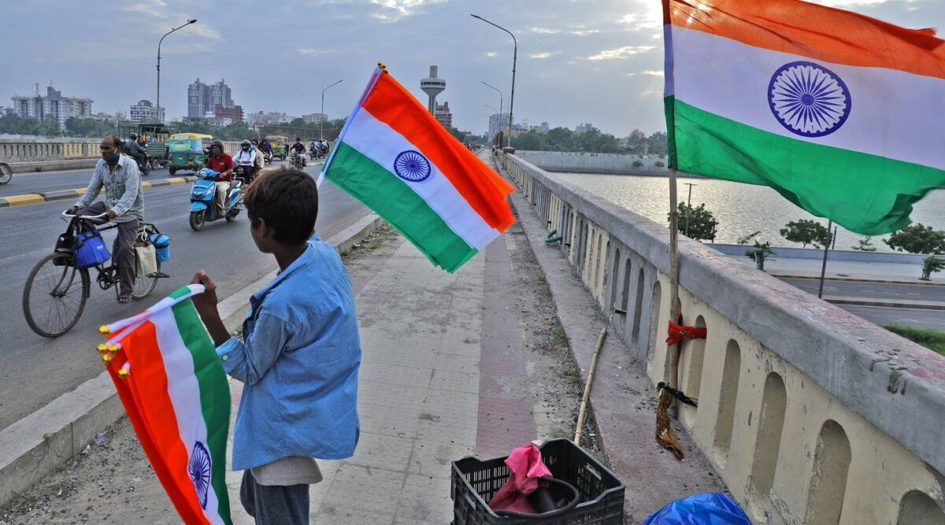 A boy selling National flags on the eastern end of Nehru Bridge ahead of Independence Day. (Express photo by Nirmal Harindran)

One concentrates on the true foundation of national greatness, the other creates an impostor-like substitute. One is premised on fear, the other on hope.

It was the 1920s. India had been long subjected to colonialism. But the soul of the masses was stirring. Gandhi had arrived from South Africa. He crafted a political vocabulary that had no precedent in history. He put the Congress party on notice. It had to become a mass organisation, with a common touch and vernacular cadence. Even the elites, who privately grumbled about his simplicity and moralism, had to concede to his authority. After all, Gandhi had, as one leader put it, “lifted the pall of fear”. The intellectual ambitions of India’s new leaders were not modest. It was to create an alternative universality; position India as a vishwaguru on the dint of its values and the power of its example, not on the barrel of the gun. Human rights and development as the West understood them were cloaks for a false universalism. They came with imperialism and exploitation.

This vision was not uncontested. Ambedkar rightly pointed out that a civilisation that had perfected an oppressive social hierarchy was hardly in a position to occupy the high moral ground. But this vision also stood on the ground of values and an ambitious universality: The idea of human dignity at the front and centre of everything. He was cynical about the motives of his colleagues, but never about values, and he crafted the principles of a new social contract capable of being a lodestar for the ages. There were other leaders of other persuasions as well, some more conservative, some more liberal, some revolutionary, but all fully conscious of the monumental task of bringing back a long subjugated country to its freedom, its moral centre and civilisational creativity.

And creativity that generation saw in abundance. What had begun as a sort of renaissance in Bengal became a national creed. Poets and writers created new songs and stories for this new stirring nation in more languages than one can list. Its scholars were rediscovering the deepest recesses of its traditions, even as its scientists were beginning to win Nobel Prizes under difficult circumstances. New universities were created. New art forms flourished. Fierce political debate flourished over the ends of politics and the means appropriate to it. All kinds of futures were being imagined for India, from the industrial to the pastoral. But all committed to freedom. The arguments were sometimes bitter. But they were chastened by a consciousness that Gandhi reminded us of “that our besetting sin is not our differences, it is our littleness”.

But under the surface of this brilliance and glitter of this golden generation that would lay the foundations of independent India, a poison was brewing. Limited democracy came in the form of the 1935 Act. Petty squabbles over power operated under the shadow of this greatness. But the deeper poison was the poison of communalism, with its same dreary murderous templates. There were fights over conversion and reconversion, sacred cows and prohibited pigs, which pamphlets were offensive to which community, who gets patronage from the state, threats of intermarriage, and the writing of history. There was sheer prejudice as well, those reservoirs of hate that cloak themselves under the garb of a higher purpose.

The social and intellectual partitions between Hindus and Muslims acquired new force. Rioting gained momentum, mutual recrimination became the new flavour. A nation looking at freedom was now contemplating division. In a few years, the energies of an authentic universality, spiritual regeneration, creative excellence, productive political debates were replaced by horrendous violence, a fearful nationalism, community narcissism and the strategic unity of the Subcontinent in ruins. This golden generation were no fools of history; but even they were certainly fooled by it. Once the poison took hold, the best and the brightest were powerless to stop it: A few drops of poison could overpower the sweetest of nectars.

Two new nations were born. India was born amidst the failure of its nationalist project. Nineteen forty-seven was both Partition and freedom; self-determination and slaughter. Pakistan decided to continue with the Partition project; it homogenised its territory, set religious benchmarks for identity. India in an act of creative resetting decided to make a fresh start. We embraced our tryst with destiny, even in this truncated form. We tried to let the legacy of freedom define India more than the obsession with Partition. In that audacious commitment was born a grand experiment: The largest democracy in the world, committed, with various imperfections, to liberal ideals, and a new hope. Our tryst with destiny collided with quotidian realities. We did not lift people out of poverty fast enough. Social democracy was often held hostage by plutocracy, bureaucracy and caste hierarchy. But we still said, to use Aurobindo’s words, we do not belong to the past dawns, but to the noons of the future.

In the new century, it looked as if India’s economic promise would finally gain momentum. India had much to build on. But then we rolled the clock back. Our battles are like a rerun of the 1930s — cow protection, love jihad, new excuses to hate. We will now complete the logic of Partition, we said — deepen the divisions, define ourselves by those same violent templates, the sense of victimhood and bigotry that tore apart the soul of India. In the 1930s, it happened to a certain extent despite the leaders; now our leaders are leading the charge. So long as we are completing the project of Partition, we said, we will put up with anything, even authoritarianism. Fundamentalism in Pakistan, open calls for violence in Delhi, all now wearing the garb of some higher national purpose. In a strange alchemy, embracing this death wish seems to make us feel more alive as a nation.

The moral of the 1930s was clear. Once unleashed, communalism always breaks nations. It took the sheen off India’s renaissance in the 1930s; it will again corrode new India’s energies. It has momentum that we can only pretend to control. The logic of Partition and the logic of freedom are fundamentally incompatible. One traps us in compulsory identities, the other lets us define ourselves. One sees fellow citizens as a potential threat, the other as a resource to build something special. One wallows in the past, the other is oriented to the future. One concentrates on the true foundation of national greatness, the other creates an impostor-like substitute. One is premised on fear, the other on hope. One on violence, the other solidarity. Which logic will we embrace — freedom or Partition? A question for both India and Pakistan. And alas, the answer is looking depressingly clear.

Malnourished children should not be vaccinated
Hindu-Muslim Couple commit suicide in Tripura after family disapproval #WTFmews
Jharkhand -  Aadhaar: The Method behind the Madness #BreakAadhaarChains
A 'communal harmony' school in Gujarat : Will Hindu, Muslim fanatics learn?