Uttar Pradesh: At the Malakpur relief camp in Shamli district of western Uttar Pradesh, one of the largest of the dozen-odd for the victims of the riots that erupted in September, children run about barefoot in the cold and damp, with little protection from the bitter winter chill.

It’s over three months since the rioting in Muzaffarnagar and Shamli districts, just about 100 km from the national capital, displaced at least 50,000 people. The displaced, mostly Muslims, live under just plastic sheets held up with bamboo sticks. And no matter how warm a tent might be for a while, the battle against the winter dew and damp is constant. There are at least 200 families at the Malakpur camp, all drawing water from just one hand-pump. 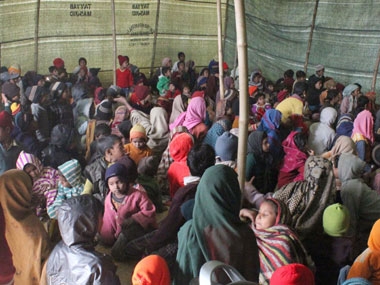 Children crowd together in one of the larger tents in Malakpur, where teaching activity occurs too. IANS

The memories of the riots that broke out on 27 August are raw: Akbari, about 60 years old, recalled how her house in Phugane village was set on fire. She had saved up for her daughter’s wedding, she said, but all that is gone now. And no, she will not return to check. This camp, she said, is home. There are different accounts of what sparked off the violence. Was it a road accident that took on communal colour? Or was it a case of “eve-teasing” of a Jat girl by a Muslim youth, as some claim?

Whatever the cause, the hostility had been long simmering. Rioting continued until early September. Curfew was lifted only 17 September, by which time many had fled their villages in fear. And since then, for many life has changed. One large tent in the Malakpur camp serves as a masjid and also doubles up as a school. There are just three teachers, and at least 200 children – at rough count – packed in close together, with just a slender Urdu text held in some hands.

The earth is damp and the cramped space has a peculiar smell. The children sway as they recite. For every few tents, a little square space, about two square feet, closed off with pieces of cloth sewn together, serves as a bathroom. There is some trace of construction too. A small set of toilets is coming up with a proper septic tank. However, any construction here is fraught with risk of being demolished as the land belongs to the state forest department.

This is the camp from where about 30 children were reported dead just as the winter set in. Looking around the camp, one sees signs of how some residents have got by with a little help from NGOs: Some of the tents have “Tayyab Masjid” written on them. Some plastic sheets are stamped with “Humanity Trust”. There is also one large tent with “Oxfam” on it.

The state administration says it is attempting to get the people to return to their villages.Officials have claimed that the process of distributing compensation is now over and the displaced must return. Many of the people do not want to return to what were once their hearths and homes. They say they fear for their lives.

At a press conference in Lucknow earlier this month, state Chief Secretary Javed Usmani said only 4,700 people live in relief camps. Ruling Samajwadi Party chief Mulayam Singh Yadav said there were no camps of riot displaced people in Muzaffarnagar district. Quite naturally, this kicked up a storm.

On Thursday, the National Commission for Minorities admitted a petition seeking action against Mulayam Singh. Homes or camps, where do the riot-hit go to? Vasila of Lank village in Shamli district, now in the Malakpur camp, said: “There is nothing to return to.” But she is not bitter. “As long as there is life, there is hope,” she told IANS, philosophically. And what of the compensation the Uttar Pradesh government says it has handed out? “I got nothing,” she said. A team of doctors arrived as this reporter visited, and set up a table. Meenakshi Dhiman, medical officer with the state government, said the doctors have been visiting daily.

The medical team’s visit that day was meant solely for a routine check-up of children, she said. Residents of the camp said the visits have begun just days ago. Asked what ailed the residents, Dhiman said the team only had to treat common colds and fever. And what of the children who died? “I have only heard of those deaths myself. In our visits here, we have not treated any cases with severe conditions,” she said. IANS.
Read more at: http://www.firstpost.com/india/at-muzaffarnagars-relief-camps-tales-of-homelessness-loss-1311275.html?utm_source=ref_article