Atrocities committed on tribals are reflected in my face: Soni Sori

DECCAN CHRONICLE. | ISHAAN MITAL
The atrocities being committed on tribals are reflected in my face: Soni Sori 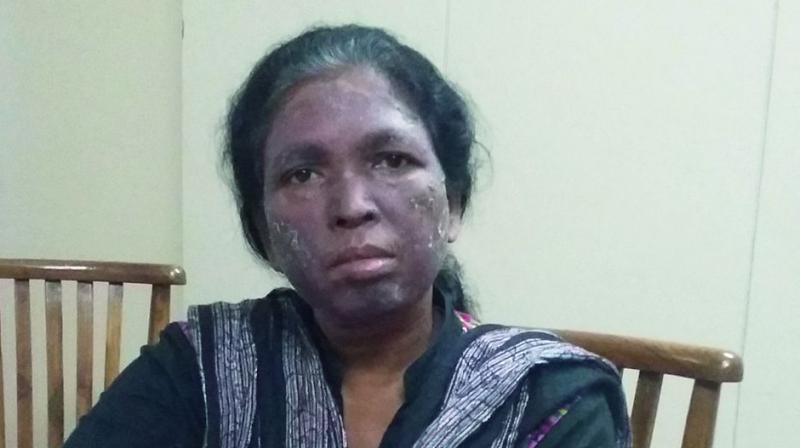 Soni Sori, a human rights activist from Bastar, Chhattisgarh, and Aam Aadmi Party leader, talks about the recent attack on her, her fight against Bastar IGP S.R.P. Kalluri, police and Naxal violence and the state of tribals, in an interview with Ishaan Mital.

Recently some people attacked you (February 21). Any clue who they were?
I don’t know them by face. But I suspect, in fact, I am confident, that Bastar IGP  S.R.P. Kalluri has a hand in all this because I often raised my voice against him, opposing police excesses in the interiors of Bastar.

Did you get a case registered against the attackers? Have any arrests been made so far?
Yes, but no arrests have been made yet. The police is conducting an inquiry.

Do you know what substance was used to attack you?
No, I don’t. They didn’t throw it at me, they rubbed it in my face, and told me, “We’re blackening your face. If you don’t shut up we’ll do worse to your daughter, she won’t even be able to walk properly.” Then they asked me to stop speaking against Mr Kalluri and raising issues of police atrocities. So I thought maybe these boys are trying to blacken my face. But after 15 minutes I felt a burning sensation…

You were in JNU recently, expressing solidarity. Why?
…When I was in jail in Chhattisgarh, JNU was at the forefront, raising issues that mattered — be it my case or any other case across the country. I went in solidarity because they seem to be getting persecuted for raising their voice against social evils.

In JNU you said, “My face today is the face of Bastar’s fight.” Could you elaborate?
The atrocities being committed on tribals — rapes, killings, etc. — are reflected in my face. But my face is not the only one. There are thousands of unnamed, faceless individuals who are suffering in Bastar.

Who do you blame for the state Bastar is in?
The state government’s policies…

But even Naxalites have posed problems for tribals…
The police and the Naxals, both are armed. Both perpetrate violence. But Naxalites have an ideology, they don’t believe in the state, they don’t believe in democracy. They say they are fighting to conquer state power and capitalism. They are clear about it. But the state government swears by democracy and the Constitution. Why then is it perpetrating violence?

Do you believe in the Constitution, in democracy?
I do. That’s why I am suffering.

But you’ve been charged with collecting “protection” money from Essar Group on behalf of the Naxals in 2011, of extortion, criminal conspiracy, attacking police personnel, even attempting to blow up and torch trucks. How do you plead to these charges?
When these accusations surfaced, I was a school teacher in Dantewada. When I was arrested, I told the court that I was a government-appointed teacher and that there should be an inquiry into the charges. But no one heard me. I was arrested under the Unlawful Activities (Prevention) Act, 1967. Then they said the case had already been on for a year before 2011. I asked the magistrate, “Why didn’t they arrest me back then?” The police said I had been on the run.

What’s the status of the cases filed against you?
Only the Essar case remains.

You filed cases against Dantewada SP Ankit Garg for custodial torture and rape in October 2011. What’s the status of that case?
It’s pending in Supreme Court. Mr Garg has also been awarded the Police Medal for Gallantry…

Do you think you will win this case?
Given the state of our country’s system, I am unsure.

Why did you choose the AAP to launch your political career?
I was in Delhi when the Supreme Court granted me interim bail in November 2013. There were many rumours at that time, that I will not be allowed to stay in Chhattisgarh. I talked to my lawyer, Prashantji (Bhushan)… I said no matter what, I want to go back to my place… Prashantji was worried given how I had been treated in jail for speaking against the Chhattisgarh government.

…Would you have joined the BJP?
Somewhere, I do think that under BJP rule I suffered so much… More than the mistreatment meted out, Essar ka kaand jo tha, B.K. Lal (Essar contractor) aur J.S. Verma (Essar steel general manager) ko high court ne jamaanat diya, aur mujhe nahin diya, mujhe Supreme Court se meri jamaanat mili. When my husband died, we told the court that I be granted two hours to meet my husband, the court didn’t even allow that. I felt the government showed double standards.

Where natural resources are found in abundance, industries won’t be far. Do you believe in industrial development?
Neither me, nor my people in Bastar agree to this. That’s what the fight is all about. There’ll be mining, new buildings will be made. But we don’t agree with this.

A lawyer duo was forced to leave Chhattisgarh recently. A journalist’s house was attacked and she was forced to leave. Is this new in Chhattisgarh?
Not at all. The government has always done this. Whoever tries to speak for innocent adivasis, speaks in their interest, talks about their rights shall be called deshdrohi. That’s how it has been.

Don’t you fear for your life?
No, I am not scared. Nothing worse can happen to me. I went to jail. They inflicted pain on my body and they continue to do so. People fear jail or death. The two and a half years I spent in jail were akin to death. So I don’t fear anything. http://www.deccanchronicle.com/opinion/op-ed/130316/sunday-interview-govt-swears-by-the-constitution.html