Australia- the Native Title Act is now tainted by Adani, but our fight continues

It’s some weeks since the Parliament backed George Brandis’s distortion of the Native Title Act in the service of the mining lobby.

The dust has settled and we’re writing to let you know that our fight continues.

We were not beaten just because the major political players cut a dodgy deal under the veil of a manufactured crisis.

We are still in the courts fighting the mine. Our supporters in the community grow every day. And we are more resolved than ever to defeat this toxic mine proposal and its Government and media backers.

Last week we were honored to jointly receive the Ngara Institute’s Inaugural “Activist of the Year” award from Julian Burnside QC, and to have a generous testimonial from Naomi Klein. 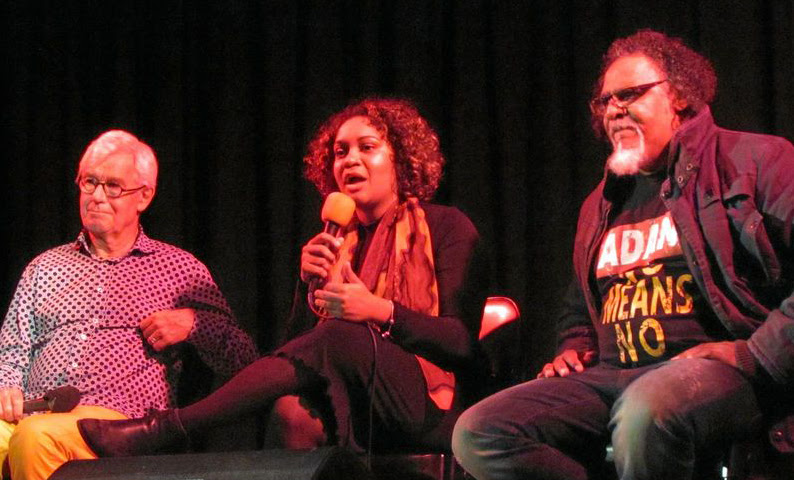 And this week, we have launched our new “Adani, No Means No” t-shirt for people to show their support for our campaign.

Please buy one and share this with your friends. All proceeds go to our fight against Adani’s mine destroying our Country. 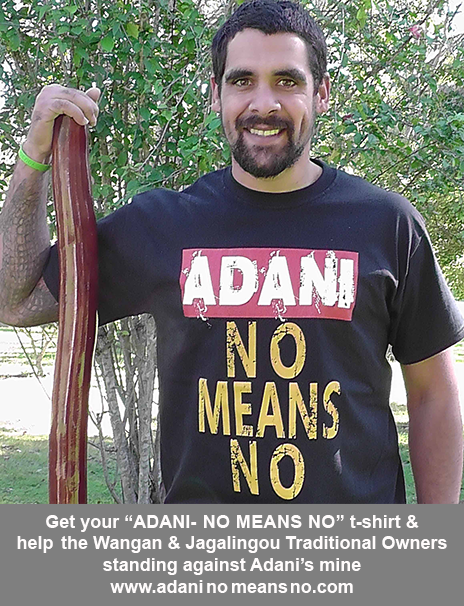 Your support and appreciation helps us greatly. And we will use it to continue our fight.

So while the Turnbull Government certainly delivered on its promise to Adani to ‘fix’ native title, it absolutely did not give Adani ‘the green light’.

The Native Title Act is now tainted by Adani. But it hasn’t stopped us. And we will stop them.

We have Adani, the Queensland Government and the Native Title Services body in the Federal Court until March 2018. Adani do not have a registered land use agreement with us and if we succeed with our litigation, they will never have one.

Please continue to assist us directly with donations to our Defence of Country fund. Even with the support of our dedicated legal team, we still have substantial costs to meet.

We maintain our resistance. And we want you to know that with your support we fought hard to stop the Native Title laws being weakened in the service of the mining lobby.

We held the changes off for months. We proved that there was no crisis or urgency. And we shone the light on the Turnbull Government’s manipulative and disingenuous conduct.

In that time, we had Adani on the ropes (and it took the intervention of the Attorney General George Brandis to save them). We got our litigation against the sham ‘agreement’ into the courts. We made progress.

In the end, only the Green Party held a line against the native title amendment bill; and for real native title reform underpinned by the consultation and consent of Traditional Owners around the country.

But even in the midst of this badly concocted outcome, the Federal Shadow Attorney General, Mark Dreyfus QC, recognised the strength of our ongoing resistance when he told the Parliament that:

The passing of the bill did not “provide some kind of removal of a final legal hurdle for the Adani mine, as some media reports have suggested. There are in fact several very serious pieces of litigation that remain on foot… In particular, the Wangan and Jagalingou people, the traditional owners of much of the land on which the mine and its facilities are proposed to be built, have several legal actions against Adani…

“In particular, they have made clear that there are some very serious allegations of fraud against Adani regarding the processes under which the Wangan and Jagalingou agreement was purportedly reached. Those proceedings, which may very well impact on the validity of any Indigenous land use agreement, will only commence trial hearings in March of next year, and there are other legal actions underway, including a case that challenges the validity of the licences issued by the Queensland government”.

Our “unfinished business” with Adani and the State is far from over.

Please stand with our Family Council as we continue our Defence of Country.

Thank you for your commitment and support.

Poor public health services are pitting doctors and patients against each other
Savarkar & the BJP
Advertising - #VijaySales must #TakeDown An Ableist Ad That Mistakes Blindness For Incapability
Vedanta's loss on Odisha refinery crosses Rs 4,000 cr