Azadi’: How Kamla Bhasin improvised and popularised the slogan 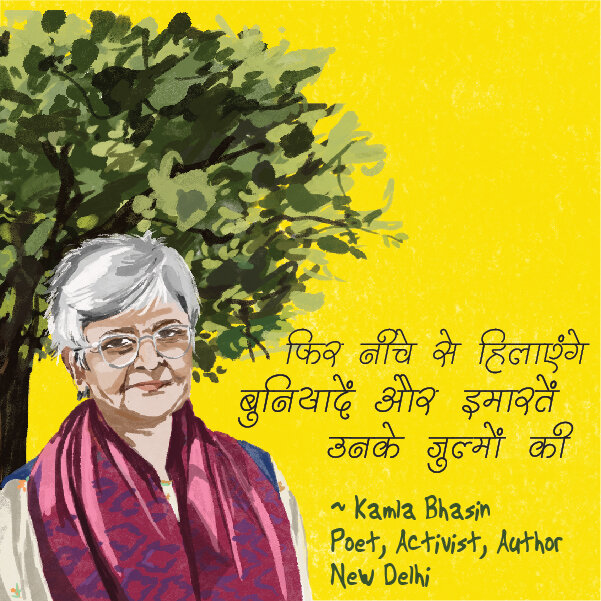 Today, ‘Azadi’ has emerged as a cry among the youth against oppression in all forms. However, it essentially was a form of resistance against patriarchy Kamla Bhasin passed away at the age of 75. (Express Archive)

Back in 1991, a woman in her forties caught people’s attention at the Women’s Studies Conference at Kolkata’s Jadavpur University, as she beat a little drum and chanted a slogan. This was Kamla Bhasin, screaming ‘Azadi’ against patriarchy while being surrounded by other women

The word ‘Azadi’, meaning ‘freedom’, is now a common clarion call at almost every student protest. More recently, the expression echoed during Kanhaiya Kumar’s popular chanting, demanding ‘Azadi’ from discrimination, Brahminism, poverty, at Jawaharlal Nehru University in 2016 and later, at the anti-CAA-NRC protests.

The slogan also made way to pop culture, as part of the movie Gully Boy, starring Ranveer Singh as a rap artist, in a song by Dub Sharma.

Today, ‘Azadi’ has emerged as a cry among the youth against oppression in all forms. However, it essentially was a form of resistance against patriarchy.

In an interview with The Quint in 2019, Kamla shared that she heard the slogan for the first time in 1980s among feminists in Pakistan. She was quoted as saying, “Pakistan at that time was ruled by Zia-ul-Haq. The first group that rose up against Zia-ul-Haq was not a political party, it was a group of Pakistani feminists. I witnessed one such meeting and that’s where they chanted it. The chant went: Aurat ka naara – azadi/Bachchon ka naara – azadi/Hum leke rahenge – azadi/Hai pyara naara – azadi.” Inspired by the chant, Kamla Bhasin improvised and came up with her own poem.

At the same time, the feminist icon acknowledged that the slogan was meant for all. She famously chanted ‘Azadi’ not just for women but labourers, dalits, adivasis and so on, during ‘One Billion Rising from South Asia’ a campaign to end violence against women. “From patriarchy-Azadi/from hierarchy-Azadi/from endless violence-Azadi/from helpless silence-Azadi…for self-expression-Azadi/for celebration-Azadi,” Kamla chanted.

Kamla Bhasin began her work on gender back in the 1970s. After quitting her job at the UN, she began to work full-time on her feminist network Sangat. The author and women’s rights activist passed away today, September 25, at 3 am.

Here is an excerpt Interviewed by Nida Ansari

and we have roots of our own too

We stand tall on these roots

And because of them, we have fought and silently marched ahead

They cut us from above

We expand and spread from below.

and will shake the foundations and structures of their oppression.

~A poem by Kamla Bhasin on the resilience of women. (Translated from Hindi to English by Sunita Bhadauria)

Being 74 years old and at severe risk of catching Covid, unable to step out of her house during the pandemic, didn’t stop Kamla Bhasin from conducting capacity-building workshops, training and empowering thousands of people through the virtual world and her own YouTube channel. She believes that as humans we have the capacity to change through the power of love, solidarity and friendships.

Kamla Bhasin was born in Pakistan in 1946. After getting her Master’s Degree, she went to Germany on a fellowship, for two years. For a year, in 1970, she worked with the German government in the development sector. Eleven months into the job, she returned to India to work with the Adivasi and Dalit communities. With Seva Mandir, a grassroots NGO based in Udaipur, she worked on-ground, struggling to get the community interested in literacy. After a humbling breakthrough, she began to engage with them on a deeper level, trying to understand their immediate needs and concerns. For four years, she worked with the community to dig up wells.

She became cognisant of how the drought relief provided by the government was reaching only select communities, and decided to focus on working with only the marginalised. From 1973 onwards, she and her then-partner took to the pen. She cultivated a prolific career in rural journalism; where she would write articles in Hindi about the impact of drought on communities, especially on women, and he would translate them into English. After four years with Seva Mandir, she joined the Freedom from Hunger campaign of the FAO/ UN where she worked for 27 years. The work was to identify innovative programs at the grassroots level in Asia and organise capacity building trainings for development activists. In 1998 along with 19 other people,  she co founded Sangat-A Feminist Network, where she continues to work since 2002, after resigning from the UN. As the South Asia co-ordinator of One Billion Rising campaign, she has worked extensively on campaigns calling for peace and awareness of the violence women live with.

Kamla Bhasin chooses to believe in people. Under the umbrella of Capacity Building, she explains the importance of solidarity, networking, friendships, and love. As she rightly says, “Development cannot take place without peace.”

“The pandemic has done two things – for one, it has brought to the surface what lives deep inside of us, especially what rises during an emergency. There was an increase in domestic violence, which does not come as a surprise to me. Decisions were made without the slightest bit of compassion. A lot of pent-up frustrations of people came rising to the surface, and frustration is always acted out on the vulnerable. Those, full of compassion, did their bit and more.”

“ Secondly, the pandemic has been a magnifying glass, for all to see the cracks in our society. The ones who feed us, enable us to travel, provide us with shelter – they are the ones who were denied any and all support. When people ask me how I’m doing, I say ‘main well-off hoon, toh main well hoon’. ( I am well off, therefore I am well ). As a beneficiary of this system, we are definitely a part of the problem. For us to make a difference, we must change our lifestyles, not simply our belief systems.”

The reality of Kamla Bhasin’s life is far from rosy. She is the sole familial caregiver for her 40-year old son, who lives with disabilities. Expressing gratitude for her 4-member team, she reflects on the importance of mutual aid, especially in the time of a global pandemic.“So many grassroots-level NGOs have done such brilliant work in the pandemic! From sourcing and providing dry rations, cooked food and menstrual products to communities to the women groups in Rajasthan who have initiated their own ambulance system for people in distress. Everyone’s work has shot up considerably during this time.”

She speaks about how her work in Capacity Building has found new life in this time. “My entire body of work revolves around the interrelation of gender, ecology and the economy; and the connections of love, friendships, analysis of caste, class and gender. My work isn’t geared towards income generation, it’s about analytical understanding. Capacity Building is about empowering people with tools to understand where they are, and where they could go. Keep in mind, skill building does not equate to Capacity Building. Someone with an MBA degree can still be operating from a patriarchal mindset.”

“Women! Create alternate familial bonds by connecting with your friends and your communities. Wherever you are, whoever you are; engage in dialogue. Single women living alone in cities, make a commune. Start where you are. To create an equal space for movements in the post-pandemic world, the first step is to build solidarity in the face of aggression and violence. Expand the space of debate.”

When speaking of her driving force, she mentions the death of her daughter. “Without a mission in life, I wouldn’t have survived. Movements are built with poetry, design, communities; not simply with sloganeering. My work keeps me moving, keeps me resilient. It’s all about building networks and alliances; and I find great joy in this.’’