Babri Masjid demolition couldn’t have happened without a premeditated plan. I know. I was there

It’s difficult to comprehend how the giant and sturdy medieval structure could have been razed simply by the frenzied ‘karsevak‘ mob in Ayodhya.

Dilly-dallying by defence lawyers, lethargy of the prosecution and apathy of the judicial system allowed the all important Babri Masjid demolition case to hang fire for quarter of a century.

And I say this with conviction and experience as a key witness who was cross-examined by a battery of defence lawyers for 10 days before the Rae Bareli court, where it took 88 pages to pen down all that I had to say and some 10 pages to record my evidence in the Lucknow court.

Urgency was never reflected in the attitude of advocates representing both sides. No wonder, the case moved at a snail’s pace. Often queries raised by them looked frivolous and more often than not hogged away the precious time of the special courts.

Since the Rae Bareli court was headed by a relatively junior judicial officer of the rank of judicial magistrate, high-profile lawyers representing bigwigs like Lal Krishna Advani, Murli Manohar Joshi and Uma Bharti could get away by taking lots of liberties, not permitted by the Lucknow court headed by an additional district and sessions judge. There was precious little that the prosecution could do to push the cases.

The entire exercise appeared to be more in the nature of a test of witness’ memory than any probe to dig out the truth.

Frequent transfer of presiding judicial officers made matters worse. It was like coming back to square one, each time a new incumbent was in place. As time went by, lawyers representing rival sides began to show increasingly less interest as far as speeding up the process was concerned.

At times, their handicap became visible on account of the fact that many were oblivious of the topography of the 16th century mosque and its surroundings until the fateful day when it was brought down by violent mobs, December 6, 1992. 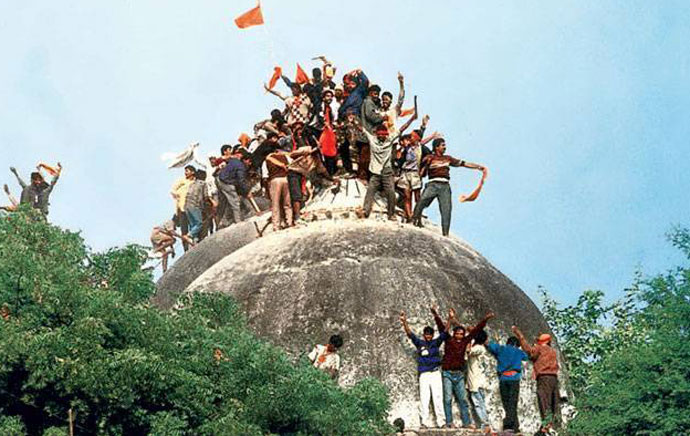 ‘I had overheard a VHP volunteer directing someone over the telephone at the VHP Media Centre to ensure delivery of certain implements — belcha, basuli and taslas.’

For all those who had never seen the sturdy mediaeval structure, it was difficult to comprehend how it could have been razed by a frenzied mob converging in the ancient temple town, widely believed by Hindus to be the birthplace of Lord Ram.

Having watched from close quarters the entire sequence of events that culminated in one-by-one fall of each of the three giant domes of the mosque, I have reasonable evidence to believe the operation could not have been carried out without a premeditated plan.

Around noon on December 5, 1992, I had overheard a VHP volunteer directing someone over the telephone at the VHP Media Centre to ensure delivery of certain implements (“belcha”, “basuli” and “taslas”), which were eventually used in the demolition.

It was my deposition that led the CBI to track down the person at the other end of the phone line, and he became an important link in the conspiracy theory established by the CBI.

The modus operandi adopted in pulling down the Babri Masjid was another clear cut indication of the planning that preceded the demolition. Some of the implements like “belcha”, that I had overheard being ordered by the VHP man over the telephone, came in handy in thinning down the two-and-a-half-feet thick supporting walls of the mosque.

And once the thickness was reduced after being chiselled away at the plinth level by “belchas” from both sides of the wall, they dug big holes through which thick ropes were pushed to form a loop. Thousands of “karsevaks” hovering all over the place were asked to pull the two ends of the loop, thereby shaking the very base of the walls, which brought the entire dome crumbling. The same technique was adopted with each of the three domes that went down in a matter of three hours.

Had it not been for this unique technique, that could only have been the product of a sharp engineer’s mind, the mosque would have probably taken days, if not weeks, to be demolished.

In fact, that became clearly visible when the violent mobs initially climbed atop the domes and sought to hammer it with steel rods and pipes, pulled out of the barricading erected by the administration to regulate the crowds. But it failed to yield anything beyond a few chips of the still impregnable plaster.

No wonder, what followed shortly thereafter was an announcement over the public address system, “Yeh dhancha ab girne wala hai; aap sab jo is dhanche ke upar charhe huye hain, kripya apni suraksha ke liye neeche utar aaiye” (this structure is about to come down; all of you who are atop the roof may please come down for your own safety).

In order to make this intelligible to people from different corners of the country, the announcement was repeated in several Indian regional languages. Soon after that, the actual demolition task was undertaken.

Now the latest order of the Supreme Court makes it pretty evident that there was a conspiracy behind the whole operation. Whether BJP bigwigs –Advani, Joshi, Bharati, Vinay Katiyar, Sadhvi Rithambara and Giriraj Kishore – were part of the criminal conspiracy is a question the apex court wants to be ascertained by the trial court.

Two other key accused – Ashok Singhal and Vishnu Hari Dalmia – both top VHP leaders are dead, while proceedings against former UP chief minister Kalyan Singh cannot be re-opened as he is currently the governor of Rajasthan.

However, by transferring the cases of these VIPs to the same court where the lesser mortals accused of the demolition were being tried, the Supreme Court has made it loud and clear that no one irrespective of status is to be accorded any special treatment.

The stern directives issued by the SC bench of Justice PC Ghose and Justice RF Nariman to ensure that the trial court judge is not transferred until the conclusion of the case, which is to be now heard on a day-to-day basis, has made it clear that the highest court of the land means business.

The apex court has also not left it to the discretion of the lower court to choose the option of starting the case afresh. Instead, the trial court will have to only take the case forward from where it has reached already.

Yet, the task may not be easy to accomplish in two years’ time that the Supreme Court has assigned. In all there are 49 accused in the two cases – 22 facing trial in Rae Bareli and 27 in Lucknow.

While one of the Rae Bareli accused died during the pendency of trial, five of the Lucknow accused have also passed away. More importantly, a large number of witnesses are yet to depose and be cross-examined.

While the Rae Bareli court, handling the top BJP leaders’ cases, had examined 57 of 131 witnesses listed by the CBI, the Lucknow court dealing with the trial of other accused has completed the examination of barely 195 of 895 witnesses.

According to a CBI source, the number of witnesses could be scaled down and only the important ones would be produced for examination. Sure enough, even that may be a tall order.