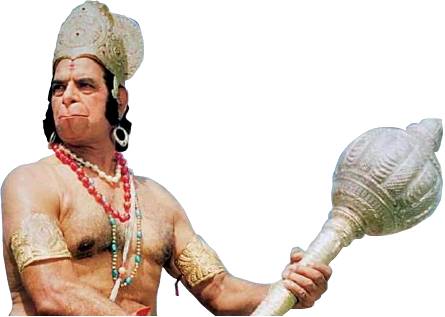 Sections of the Hindu right and the secular left both seem to think that Arvind Kejriwal’s electoral victory saw him peddling ‘soft Hindutva’. Hanuman knows that this is utter monkey baat

Not since the epic tussle in Lanka have the good folks of Kishkindha been glued to the news the way they have been after Aam Aadmi Party (AAP) stormed back to power in Delhi. For, in the centre of the non-lull after the storm is none other than one of their own – Pavanputra Hanuman.

Delhi Chief Minister Arvind Kejriwal has managed the impossible: getting the Hindu right and the secular left together in one corner to throw peanuts at the AAP chief. Now, one can vaguely understand BJP supporters and leaders turning their grand sulk into something therapeutic by mocking Kejriwal for his public display of devotion towards Bajrang Bali. No one likes being pointed out as not being unique.

Before the Delhi polls, upon being prompted on a news channel, Kejriwal had recited the Hanuman chalisa, which invited Uttar Pradesh CM Yogi Adityanath to state with a pout, ‘Now Arvind Kejriwal has started reciting the Hanuman Chalisa. In coming days, you will see [All India Majlis-e-Ittehadul Muslimeen (AIMIM) chief Asaduddin] Owaisi reciting the same.’ Yes, the yogi doesn’t seem to like sharing his Hindu street credentials with his Delhi counterpart.

Kejriwal’s visit to the Hanuman Mandir before poll day also invited taunts from BJP prom queens, the party’s Delhi chief Manoj Tiwari going to the extent of accusing the CM of ‘touching the [Hanuman] idol without washing his hands’. ‘Appropriating’ public displays of (Hindu) faith on the political stage seems to breed a great sense of hygiene in self-styled keepers of the (Hindu) faith.

‘The trouble is believers in Hindutva choose to forget, quite ironically, that India is a Hindu majority country, not a Hindu majoritarian one (where the majority chooses to impose its numerical supremacy by demanding primacy over others), the distinction being as acute as the one between biryani and pulao. Being Hindu, displaying one’s Hindu-ness in public – even as political ‘show and tell’ – existed much before BJP tried to make itself its sole custodian. And it exists well beyond BJP subscribers.

In the late 1980s, Ramanand Sagar’s epic Ram leela on Doordarshan, ‘Ramayan’, would empty out streets on Sundays in communist-ruled Kolkata.

Even as I would wait impatiently (and sometimes rudely) for the whole family to finish watching their weekly dose of Ramayan, so that I could watch ‘He-Man and the Masters of Universe’ or some other mythological show, I loved the mace-carrying Dara Singh as Hanuman. (I already loved the Dara Singh-Hanuman combo I had first encountered on the big screen in the 1976 film, Bajranbali, going to the extent of re-enacting Hanuman tearing open his chest to display Ram and Sita residing in his heart – except in my case, I would showcase my grandmother and grandfather tucked away beneath my rib cage.) Hanuman, in a sense, stands apart from the other more serious characters in the Ramayan, in that he has always been more of a ‘household’ figure, more approachable, almost fraternal among the deities. The Bengali writer Rajshekhar Bose, under his nom de plume ‘Parashurman’ while writing satire, chose Hanuman in his 1937 short story, ‘Hanumaner Shopno’ (Hanuman’s Dream). He depicted the ageing bachelor monkey-god, getting increasingly bored in prosperous, peaceful Ayodhya where Ram Rajya has been established for a while now. Sita, sensing simian ennui, knows the remedy: marriage. Bose proceeds to tell readers Hanuman’s search for marital bliss.

It is this same approachable Bajrangbali who took on a ‘cool’ look ‘with attitude’ when, in 2015, Kerala graphic artist created what would subsequently be known as the ‘Angry Hanuman’ poster. Over the next few years, this face, depicting ascowling, Marvel superhero ‘Hulk’ version of the otherwise rather docile monkey-god became the rage all over the country, especially in north India, adorning the backs of cars and autos. Without being in anyway provoked, the ‘woke’ crowd reacted, crying out how could such a ‘hyper-muscular,’ ‘aggressive’ depiction of Hanuman take shape?! (Answer: why ever not, if one can refashion, say, a Victorian Sherlock Holmes to a mobile-texting 21st century Londoner?) And, thus, another cry of horror — ‘Hindutva Hanuman!’ — was born for social media, and, indeed, mainstream media, consumption.

Which brings me to the problem the secular left – to put a quick tag to this lot – has with Kejriwal’s public display of his Hanuman bhakti. His appearances at the Hanuman Mandir (he returned there after winning the polls) were deemed displays of ‘soft Hindutva’ (a term I have described elsewhere as being akin to ‘halfpregnant’). AAP was, to them, a more palatable version, a ‘B-team’, of BJP.

The fact that religion, and public display of one’s faith, is part and parcel of an overwhelming part of Indian, let alone Hindu, society seems to bother this brigade. ‘But politics and religion?’ they exclaim, in a mix of disparaging and patronising tone. Mohandas Gandhi’s constant references to Ram, blessings being sought at temples (or dargahs) by the likes of Indira Gandhi, PV Narasimha Rao, Mamata Banerjee, Rahul Gandhi and Kejriwal under the full glare of cameras may well be canny, unsubtle political optics. But they were/are certainly a far cry from being the proverbial one step away from slipping in a ‘Hindu Rashtra’.

It wouldn’t be an exaggeration to say that such an attitude towards religion in general, and Hinduism in particular, has played no small part in the Hindu right’s claim as the sole custodian of the faith. A former director general of Doordarshan once told me how he now thought that he had made a mistake to give the green signal to Ramanand Sagar’s Ramayan at a time when the Ramjanmabhoomi movement was picking up momentum. What he was saying was that, in hindsight, he believed that the TV series became propaganda for the Hindu right and fuelled communal politics in the country.

I disagreed, and still maintain that that’s like saying Govind Nihalani’s ‘Tamas’ aired on Doordarshan around the same time was responsible for fomenting Hindu-Muslim tensions and anti-Pakistan sentiments among sections of viewers. Communal politics is the source of communal politics – not Amar Chitra Kathas, or mythological epics in hypercolour.

Kejriwal’s displays of Hanuman worship is as ‘Hindutva’ as those, non-Hindus included, thronging to pandaals to see Durga idols, or building society aunties raucously singing, ‘Om Jai Jagdish Hare…’ at jagrans. Neither has Kejriwal borrowed any ‘Hinduness’ from BJP that many sulking bhakts seem to suggest as a ‘victory of our ideology even in electoral defeat’, nor is it a quiet lurch towards ‘Hindutva’ that folks honed in the French definition of secularism (separation of Church and State), rather than the Indian one (equal freedom for all religious faiths) seem to think.

As any Hanuman devotee in or outside an akhada, not bothering to wrestle with such definitions, can vouch for, being a Bajrangi bhaijan is a far cry from being party to the Bajrang Dal.