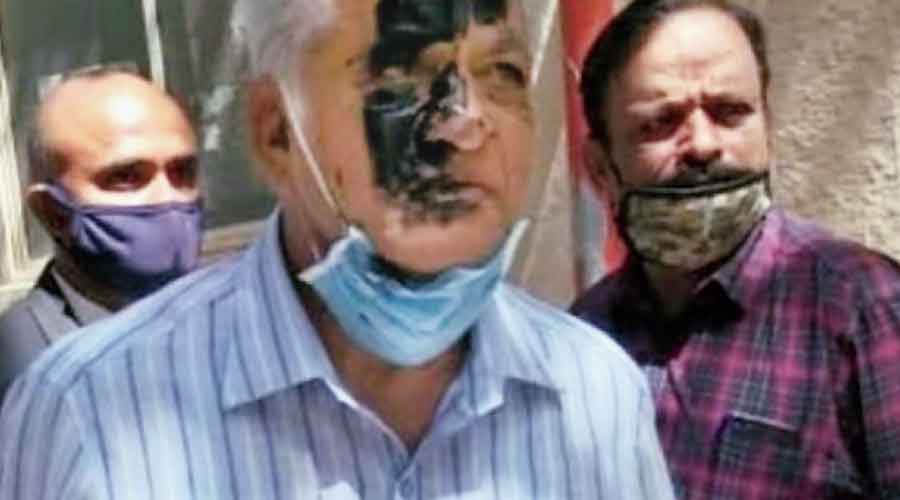 He has been a staunch critic of RSS and its ideology and has been living under armed police security since the assassination of M.M. Kalburgi

Writer and rationalist K.S. Bhagawan had ink thrown in his face at a Bangalore court complex on Thursday after he had obtained bail in a case in which he is accused of hurting Hindu sentiments.

A lawyer named Meera Raghavendra tweeted a video that purportedly shows Bhagawan walking out of the city civil court premises with a blackened face, and claimed she was the person behind the act.

Bhagawan, attacked in front of his police guard and his lawyer, has been a staunch critic of the Sangh parivar and its ideology and has been living under armed police security since the assassination of fellow rationalist M.M. Kalburgi in 2015.

It was Meera who had filed a case in December alleging Bhagawan had insulted the Hindu religion and its gods at a news conference in Mysore, prompting the rationalist to appear in court and secure bail on Thursday.

In the video, Meera is purportedly heard shouting: “I’m ready for everything…. I’m ready to go to jail.”

She then appears to tell a dazed Bhagawan: “You are a professor and so old but still speak ill of Hinduism and our gods. Aren’t you ashamed of yourself?”

Police have booked Meera on a complaint from Bhagawan. Calls to Bhagawan’s phone number went unanswered.

The attack on Bhagawan, a retired professor of English, prompted a two-hour protest sit-in in Mysore by about 300 people, including progressive and Dalit activists and writers.

“This is a brazen assault on free speech. We demand action against the lawyer who did this,” Dalit writer Mahesh Chandra Guru said.

Meera defended herself, telling a Kannada TV channel: “I felt insulted with his writings and speeches. Will he say the same thing against other religions?”

She found instant support from Pramod Muthalik, chief of the Sree Rama Sene, accused of targeting women customers at pubs in Mangalore a decade ago.

“I laud Meera Raghavendra. She has sent a strong message. People will react like this in future if anyone says anything about the Hindu religion, Ram or Krishna,” Muthalik told a TV channel.

“More than a lawyer, she is a citizen of this country and has expressed her anger. He (Bhagawan) may not have any faith in Ram and Krishna, but we worship them.”

The Karnataka government had in January rejected Bhagawan’s controversial 2018 book, Rama Mandira Yeke Beda (Why the Ram Temple is Not Needed), as a possible addition to state libraries.

While Bhagawan maintains he has only cited material from Valmiki’s Ramayan in questioning Ram’s greatness, the Sangh parivar found the book offensive.

“I have only quoted from Valmiki who described Ram as a mere mortal and not a god,” Bhagawan had told this newspaper.

Investigations into the 2017 assassination of journalist Gauri Lankesh, allegedly by Hindutva activists, had unearthed leads suggesting her killers had planned to murder Bhagawan as well, police sources have said.