Barkha Dutt on Her Experience With Sexual Abuse and Violence #Vaw

Here is an exclusive extract from Barkha Dutt’s new book This Unquiet Land – Stories from India’s Fault Lines. It is available at all leading bookstores and online at Amazon and Flipkart. Excerpts reproduced courtesy of Aleph Book Company 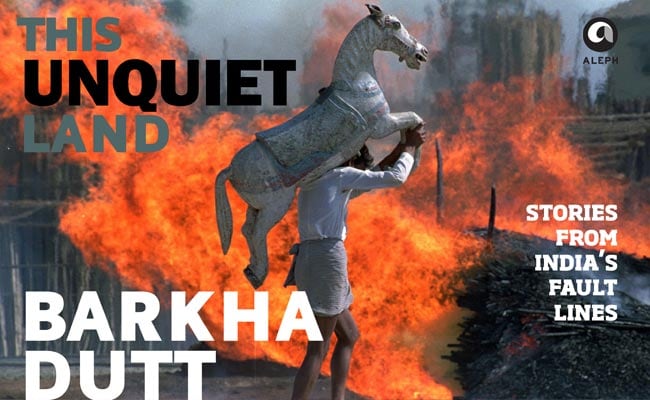 I was not even ten when I was first sexually abused. The perpetrator was a distant older relative who had come to stay with us for a short period of time. Like many Punjabi households, ours was an open house, always welcoming to cousins and their friends, and their friends in turn. Today, decades later, I cannot even recall the precise connection of this man to my family. But, to a child’s eye, he was avuncular and affectionate and, in any case, I just assumed I was safe in my own home.

Little did I imagine that this much-older, family figure – someone who would take the kids for piggy-back rides and twirl us around in the air – could be such a monster. Worse still, as a child unable to process the magnitude of what had happened – I was the one who felt grotesque and dirty. The concept of teaching your child to distinguish between ‘good touch’ and ‘bad touch’ had not yet become the enlightened norm. But after the first few times I had innocently followed him to ‘play’ with him in his room, I was overcome by panic and disgust.

Ridden with guilt, unable to shake off the feeling of being dirty and trapped in a sink of fear, I finally told my mother that something terrible had happened. My assaulter was immediately thrown out of the house and I buried the awfulness of the memory in a deep, dark place that I hoped I would never have to revisit. As I grew older, what stayed with me, strangely enough, was the rancid smell of hair-oil; even years later, anything that smelt faintly similar made me nauseous. In my growing years, I blocked out the man’s face, his name, in fact the very incident was banished to the recesses of my consciousness; but from that moment onwards, sexual abuse had an odour.

It was the loneliest and most frightened I had felt as a child and the fear lurked in the shadows, following me into adulthood. I discovered that I was often wary, even scared, of sexual relations – a familiar consequence for those who had experienced abuse as children.

I didn’t know it then but my experience, horrible as it was, was hardly uncommon. In 2007, the first ever government survey of child sexual abuse uncovered that more than half the children spoken to (53 per cent) said they had experienced some form of sexual abuse. Twenty per cent of those interviewed said they had been subjected to severe abuse, which the report defined as ‘sexual assault, making the child fondle private parts, making the child exhibit private body parts and being photographed in the nude’. Yet, the silence of young victims and the misplaced shame they felt shielded the perpetrators. These were men deeply embedded in the family structure, it made it that much more difficult to call them out. The report found that 31 per cent of the sexual assaults were by an uncle or neighbour. So it wasn’t surprising that over 70 per cent of children had never spoken to anyone of what was done to them.

The toughest discovery for me was to find that feminism offered no shield against the vulnerability, confusion, guilt and rage you felt when you were abused.

As a young adult who experienced violence in a personal relationship for the very first time as a postgraduate student at Delhi’s Jamia Millia Islamia University, my response was less confused but no easier to act on. By now I was a self-aware young woman with strong opinions. I thought I was difficult to intimidate. I believed I would know exactly what to do if a man I was dating ever hit me. Of course I would take him to the cops, I would say with confidence when we sat around discussing how unfriendly the legal system was towards women. I thought I was never going to stand for anything like domestic abuse. It went against every book I had read, every principle I held as sacred and every bit of my self-image. Until it happened.

I was briefly in a relationship with a fellow student at the university’s mass communication centre. It was a very different environment from the people-like-us safety of St Stephen’s. Budding filmmakers exemplified every depressing cliche you could think of. Everyone smoked; you even lit up in class because the zany graphic design teacher did; everyone was filled with angst and cynicism and everyone thought ‘intense’ and ‘dysfunctional’ were interchangeable adjectives.

I was a bit of a misfit. I did not smoke, I hadn’t yet had my first drink and I was considered puritanical and uptight in an environment where it was assumed that creative people were sexually promiscuous. I don’t quite remember how I ended up straying into an unlikely involvement with a fellow student who was studying to be a cinematographer. Quite soon I knew that the relationship was wrong for me. Warning bells began sounding the day the man suddenly grabbed a razor blade and opened up his wrists when we had an argument and I told him I no longer wanted to be with him. In absolute horror I watched him wrap his scratched wrists in strips of white Band-Aid and calmly smoke a cigarette, his eyes fixed on me in a cold, hard stare. It could have been a bad movie, except this was my life, it was happening to me. I knew I was being manipulated and blackmailed, yet I was terrified. I didn’t end the relationship that day.

The next time we met I was categorical that I was not going to allow myself to be emotionally and mentally bullied. When I told him that it was over between us he sprang up from the floor where he had been lounging, pinned me to the ground and lay on top of me, trying to sexually force himself on me. I slapped him. He hit me hard, grabbed me by my arm, shoved me around, slapped me and pushed me against the wall. My face was burning up with pain and anger. I pushed him away, walked out and took a rickshaw back home. My right cheek was now a purplish blue mass. Initially, I told my family that I had walked into a door.

But I had resolved that I was never going to be a woman who would hide abuse because of a misplaced sense of embarrassment. I was determined to complain officially to the campus authorities and contemplated going to the police. But this was still the early nineties. There were no sexual harassment guidelines, there was no rape law, there was no environment of support that is available to women in these situations today. Still, I took the faculty into confidence. Some of my teachers were progressive feminists themselves. They were empathetic but also practical. They explained that I still had two years of my programme left before I would get my degree. The university was unlikely to act on a ‘he said, she said’ complaint.

To reiterate, at the time, there were no mandated sexual harassment committees in existence. The Vishaka Guidelines would only be passed in 1997 and the Domestic Violence Act even later, in 2005. To review the options I had, I went to meet lawyers who worked in a women’s collective. Could I take this to court, I asked? They told me, as kindly as they could, that I would spend the next two decades in court and the fact that the violence had taken place within a relationship would only be held against me.

I spoke to other students and discovered that other women too had been hit and abused by the same man who had done this to me. But they weren’t willing to put their names down on any kind of official petition asking for his expulsion. For all the fight I thought I had in me, I was effectively helpless. The most I managed was to get myself placed in a separate working group where I would never have to interact with him again. As I went about my work on campus as bravely as I could, I could hear the sniggers and the gossip behind my back. It was I who was considered the troublemaker, not the actual perpetrator.

In 1994 when I applied for my first job at New Delhi Television Limited (NDTV) I had only one request. If ‘that man’ from Jamia was going to be hired as a cameraman (remember, private television had not yet taken off in India and the pool of trained people available was very small), I could not accept the job. They agreed. And I never saw him again. It was perhaps the most isolating experience of my adult life.

Much later in life, I would discover that I was not alone; almost every young woman I knew had experienced something essentially similar-not just out on the streets, but within the so-called safe zone. This was not startling for a country in which government data itself shows that even today, 90 per cent of Indian women who have been sexually abused know their assaulter. What broke us internally and what we could not fight publicly was the abuse we experienced within the circle of trust. We could slap the molester on the local train but were almost never able to say out loud that among our uncles, cousins and family friends were sexual predators who had manipulated us into feeling a shame that should have been theirs. We buried it deep within us, unable, even years later, to excavate the pain, the anger and the confusion.