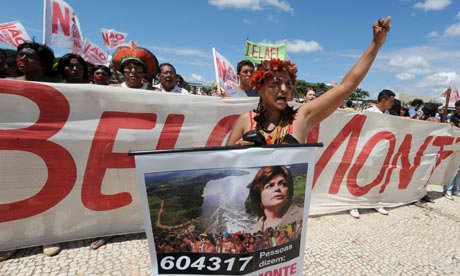 Brasilia, Brazil – August 29 – The Brazilian Supreme Court has overturned the suspension of the Belo Monte Dam, caving to pressure from President Dilma Rousseff’s administration without giving appropriate consideration to the indigenous rights implications of the case, human rights groups said today. The case illustrates the Brazilian judiciary’s alarming lack of independence, when powerful interests are at stake.

On August 27th the Chief Justice of the Brazilian Supreme Court Carlos Ayres Britto unilaterally overturned an August 14th ruling by a regional federal court (TRF-1) to suspend construction of the controversial Belo Monte Dam. The suspension was based on illegalities in the 2005 congressional authorization of the project due to the absence of prior consultations with affected indigenous peoples, as required by the federal constitution and ILO Convention 169.

“This unfortunate decision doesn’t invalidate the TRF1’s judgment that the project is unconstitutional,” said Atossa Soltani, Executive Director of Amazon Watch. “This is a failure of the judiciary to stand up to entrenched interests and the power of a politically motivated executive branch that wants the Belo Monte Dam to move forward at all costs.”

The Federal Public Prosecutor’s Office is expected to appeal Britto’s decision and demand a review by the full Supreme Court. Yesterday’s decision was also not a judgment of the merits of the case and the Supreme Court may still uphold the decision that suspended this highly controversial Amazon dam project.

Justice Britto was reported to have received multiple Ministers and other government representatives in recent days who argued against the suspension of Belo Monte and long overdue consultations with indigenous peoples. Despite repeated requests, he was unwilling to meet with representatives of indigenous communities affected by the project, prior to issuing his decision on Monday.

“This case is emblematic of a seriously flawed legal system, where bureaucracy and political interventions allow for systematic violations of human rights and environmental law,” said Brent Millikan, Amazon Program Director at International Rivers. “There is an urgent need to judge the merits of over a dozen lawsuits against Belo Monte that are still awaiting their day in court.”

Justice Britto’s decision was made in response to a complaint filed by the Attorney General’s office (AGU), in which the central argument was that the regional court’s decision conflicted with a previous Supreme Court ruling in 2007. However, the prior Supreme Court decision actually recognized that the Brazilian Congress’ authorization of Belo Monte – in the absence of prior consultations with indigenous peoples – was flawed. Instead of canceling Belo Monte altogether, the previous ruling ordered that an environmental impact study and consultations with indigenous peoples be completed in order for the Congress to reach a decision on whether the project should move forward.

One of the arguments in the AGU complaint is that the suspension of Belo Monte would cause social and economic chaos if some 14,000 workers were dismissed. There is no mention of the social, economic, and environmental havoc that the construction of Belo Monte is wreaking on the region, nor the fact that when dam construction is completed in a few years, some 40,000 workers are scheduled to be fired.

“This decision sets a terrible precedent for Belo Monte and the dozens of dam projects planned for the Brazilian Amazon,” said Raul Silva Telles do Vale, Associate Coordinator for Policy and Law with the Social-Environmental Institute. “It indicates that consultations with indigenous peoples can be carried out in any manner – including after Congressional authorization of a project or after an environmental impact study has been carried out. It also means that consultations aren’t required for dam projects that don’t directly flood indigenous lands, denying what are in fact disastrous impacts on downstream communities.”