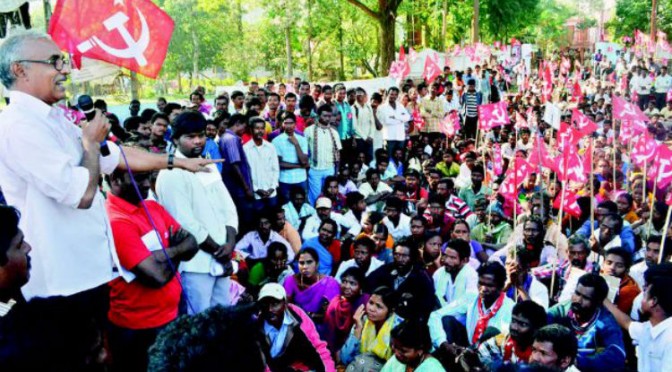 The Andhra Pradesh state government has begun attempts to mine Bauxite mineral in the Vishakha Agency area. It has issued a GO (Government Order) No. 97 permitting the APMDC (Andhra Pradesh Mineral Development Corporation) to mine Bauxite in 1212 hectares in Jerrela village areas in Chintapalli Mandal. Discussions regarding this issue of bauxite mining have been going on since a decade. The tribals have been protesting against mining with intensity and ferocity. Even the people from the plains in Northern Andhra have been supporting the tribals.

Bauxite mining would destroy lakhs of tribal livelihoods which depends on the forest wealth. The process of mining would result in air, dust and noise pollution rendering the fauna extinct. Coffee plantations of high quality and products like rajma, turmeric, areca leaf ginger, vegetables, soapnut, tamarind, condiments, and spices would be effected. Hundreds of villages and lakhs of tribals depending on the forest wealth would loose their livelihoods. Along with water bodies in the forest like the Suvarnamukhi and Gosthani rivers and Sileru reservoir the environment in general would be polluted resulting in severe heath complications to the tribals. Even rivers flowing in the plains like Thandava and Sharda stand exposed to the polluting effect of the mining process. Thus, bauxite mining which results in environmental damage on one side and tribal livelihood damage on the other side is extremely harmful.

An unsuspecting mind would mistake these to be the reasons why the now incumbent Chief Minister Mr. Chandrababu Naidu opposed the same mining proposal when in opposition less than 18 months ago. But now that he surreptitiously issued the GO, one can clearly see (if he choses to) that he is nothing more than an opportunist. He is known to be an unprincipled political manipulator with his shifty eyes – once described accurately with defamatory imagination as the looks of a thief at a cattle fair by his erstwhile colleague in the TDP – but his talent at the kind of politics he chose are recognised and respected only by those who respect such things. This brazen flipflop also proves among other things that he is still the old cut-throat blue-eyed poster boy of corporate capitalism.

Though the Fifth Schedule of the Indian Constitution provides protection to the adivasi (tribal) people living in scheduled areas, also known as agency areas, across nine states from alienation of their lands and natural resources to non-tribals, one sees that rather than upholding the adivasi people’s rights to land and resources, the government is colluding with private investors to usurp these rights.

A number of memoranda of understanding (MoUs) to set up alumina plants were signed by the erstwhile Y S Rajasekhara Reddy (YSR) government between 2005 and 2009. Under these MoUs, the AP government would, together with private companies, extract and refine bauxite ore. However, while the proposed Jindal South West (JSW) and Nalco projects have hit roadblocks, AAL has secured all clearances for its refinery and smelter complex in Makavarapalem in Visakhapatnam district.

In February 2007, a MOU was signed between the AP government and the government of Ras al-Khaimah (RAK), a member of the United Arab Emirates, for mining and refining bauxite under which the AP government promised to supply bauxite via the AP Mineral Development Corporation (APMDC), a public sector entity owned by the AP government, to the alumina refinery to be established by AAL. APMDC would mine the bauxite in the Jerrela Hills of Visakhapatnam district, a scheduled area, and supply it to AnRak Aluminium Ltd (AAL)’s refinery, which would be built outside the reserved tribal area. This peculiar set-up was apparently employed to circumvent the tribal land transfer legislation that bans private ownership of land in the scheduled areas in the state.

In 2012, however, the AAL website said, “AnRak Aluminium Ltd commenced as a joint venture between Penna group of industries and Ras al– Khaimah Investment Authority with 70:30 ratio.” But if the Penna group is the main promoter, the question is why is the company called AnRak rather than AnPenna? Is this because there is an attempt to camouflage the close links between the promoters and the YSR regime that could have hampered the deal? The Penna Cement group was founded by P Pratap Reddy, treasurer of AP Congress during the YSR years, and described as a close associate. With other AP Congress members also believed to have invested heavily in the project, it is not surprising that the project has been accorded extremely high priority, enabling it to catch up with the JSW project in implementation. The initial secrecy surrounding the deal and the subsequent speed at which it has moved, together with the close political contacts and charges of corruption, give the impression that this is yet another investment made for political rather than public gain. Such extreme detail is necessary for as the old saying goes ‘the devil lies only in the details’

Now that Chandrababu Naidu is keen on pushing the project through it is an easy step to realise that the terms of the MoU would stand but the investors would change (TDP affiliates would replace their Congress counterparts). Either ways, he is no mug when it comes to such deals. His ‘rich’ experience with Reliance Industries Ltd (RIL) in the Krishna-Godavari Basin project and his ongoing role as the primary realtor in Capital (Amaravati the capital city is ironically named ‘ the people’s capital’ ) land mafia project, not to mention his role as the CEO of Cyberabad only enriches his insatiable greed for such things.

Therefore, without the permission of the Ministry of Environment and Forests and the Gram Sabhas (constitutionally mandated) the current TDP government’s undemocratic passage of GO No. 97 stands ultra vires. Although it has been temporarily put in abeyance, this is a mere decoy to rework the corporate’s strategies to ultimately mine, market and monetise people’s resources for private gains.

The author is a political activist based in Visakhapatnam