Behind TISS protests, there is a story of unity #mustshare 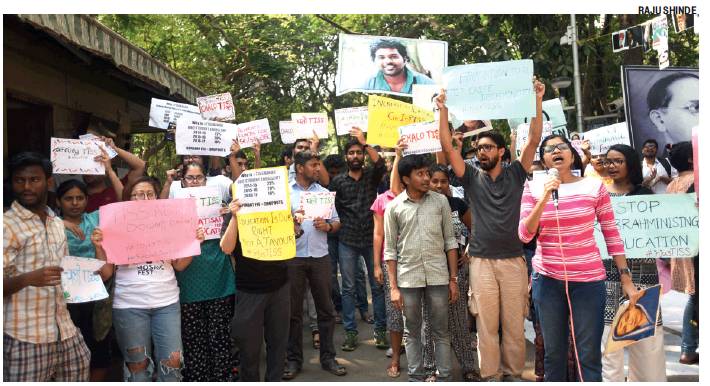 TISS, Mumbai, students have been camping at the entry gate since February 21

The current unrest at Tata Institute of Social Sciences (TISS), Mumbai, over withdrawal of financial aid to students under Scheduled Caste and Scheduled Tribe, is no regular protest. The agitation has risen above caste lines to not only find support from more privileged, general category students but has also spread to TISS campuses elsewhere, conveying only message — United we stand.

While the protesters at TISS, Mumbai, have been camping at the entry gate since February 21, 43 students at its Guwahati campus have gone on a hunger strike in solidarity. Protests have also gripped the Tuljapur and Hyderabad campuses. The authorities’ recent offer of several new measures, including fee reductions amounting to nearly Rs 50,000, to Other Backward Class (OBC) and doctoral students hasn’t cut ice with them yet.

“This protest is about our student community and our right to free and quality education. The space that the higher education in India occupies is often neglected. If there are policies being implemented that are aimed at privatising education and excluding certain social groups, then we should all care for it,” said Rajneesh D, 20, a first-year master’s student at TISS.

Rajneesh, who procured admission under the open category, is not directly impacted by the policies. What motivated him to join the protest is the fact that integrity of student community is at stake. “This fight is for the generations to come, so that their entry is not hampered for want of money,” he said.

Rajneesh pointed out that had the students come out in droves to protest against withdrawal of financial aid to OBC students in 2015, such a situation would not have come today. “We are raising this issue

because it should not happen; it is a direct attack on our right to education. It is a social science school and not a business school,” he said.

Like Rajneesh, Hari is not impacted by the withdrawal of financial aid.

“It is like this: we study in a social science institution wherein most courses deal with problems faced by marginalised sections. If you do not include them, then how will you come up with solutions to their problems? People like me will not create solutions,” Hari said.

He pointed out that many professors fear that their class will not contain students from varied backgrounds as things stand today. “We have to fight the wrong.”

He said that he understands that something as basic as paying fees becomes very problematic for students from economically weaker sections. “TISS has taught us that the problems are not easy. The institute hiking its fees is a contradiction in itself as it defies logic. What is taught to us needs to also be applied here as well,” Hari claimed.

Another 20-year-old master’s student, who did not wish to be named, said that the college is on its way to become a sectarian institute that will only contain people, who can afford its fees and come from a certain milieu. “At a college like ours, aid must be provided, otherwise, we will fail in keeping alive the legacy of our college. The brand name is itself hindered which will ultimately be ruined,” she said. “Change will only come when all groups are involved in finding a solution.”

“The current fee structure is a deterrent to inclusion as we have already seen a drop in the number of OBC students by nine per cent. Impact unpe hi hoga jo afford nahi kar sakte,” pointed out Aarti Kade, a first-year MPhil student.

She added that very few people (0.2 per cent) from nomadic tribes come to the institute. “The fee leaves women, people from marginalised sections vulnerable; I mean how will they pay Rs 60,000 a year when their annual income is in Rs 45,000? Some do not even get that much,” said Prashanti, an MPhil scholar.

“Financial support comes from the state, we are living in a manufactured state of crisis,” she added.

She said that the latest turn of events shows that the administration is not able to retain the value of the institution. “The decision to withdraw aid falls under the category: if you cannot afford this, then you do not belong to this space,” she said.

She said that the students have been forced to show their anger as no breakthrough had come for months.

Lack of provisions for prospective students has protesters worried about the impact the withdrawal of financial aid might have. The protesters managed to get the administration to blink and provide a waiver (dining hall and hostel charges to SC/ST students for batches 2016-18 and 2017-19) but OBC students are still not under the ambit.

The institute hiking its fees is a contradiction in itself, as it defies logic. What is taught to us needs to also be applied here as well