Betrayal in Muzzafarnagar: A Profile of the Survivors of Mass Communal Violence

Violence in Muzzafarnagar took place in September 2013 and was described by the BBC as ‘the worst in India in a decade.’ A new nation-wide study that looks at key areas of exclusion in India today – urban health, urban water and sanitation and working conditions for women, among others – has examined the lives of the survivors of the violence. 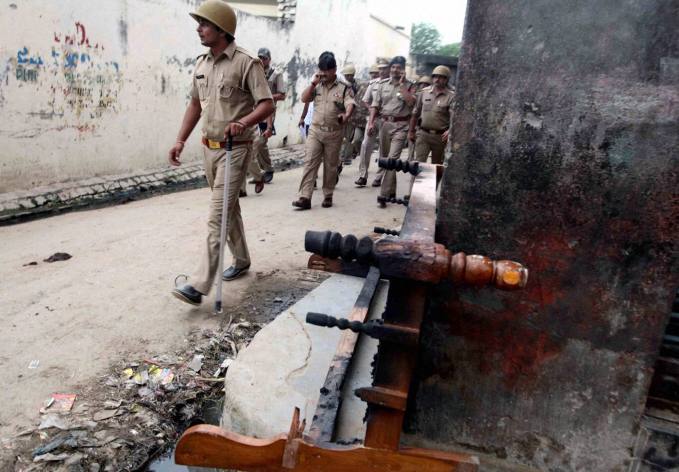 Violence against women and girls

Sexual violence, including rape and molestation, has been widely reported. Inflammatory speeches and frenzied slogans of ‘bahu bachao, beti bachao’ and ‘beti bahu ki izzat bachao’ were used to mobilise men of the dominant castes by convincing them that ‘their women’ were in imminent danger. The notion of protecting community honour was invoked to justify a direct call for targeted violence against minority women. A wave of sexual violence was unleashed against women immediately after the Mahapanchayat held on 7 September 2013. Women and girls were chased downas they tried to flee the mobs, and subjected to rape and gang rape. Young girls were singled out for particularly humiliating and degrading forms of violence.

According to a delegation of the AMU Lawyers Forum, as many as 27 victims confirmed instances of rapes but only seven were ever reported. Our discussions with women victims in Kharar and Kheda Mastan villages in Muzaffarnagar and Shamli districts respectively, revealed how violence has had other marginalising effects on women; the continuing fear has led to women’s movement outside their homes being severely restricted.

Fear and insecurity affected schooling, with large incidence of drop-out cases in senior classes, as well as access to employment among other things. Concerns about ‘family honour’ and fear of further violence resulted in a large number of under-age girls among survivor families, especially those in relief camps, being married off, ironically with the state government fuelling the push by subsidising weddings with cash incentives. According to one estimate, 398 marriages were solemnised in this way. (A Study on the Status of Women Riot Survivors: State & Non-State Efforts towards Response & Rehabilitation, Oxfam India.) These, the report notes, have tended to end up later in large-scale separations. The specific gender aspect of the loss must be seen in the context of the overall adverse gender prospects in the region – the skewed sex ratio of 889 females to 1000 males (against State ratio of 912 females), and child sex ratio of 863 girls to 1000 boys (against all India ratio of 914 girls) as per 2011 Census.

Education is another area where the impact has been severe.

Initially, in camps there were no teachers, and children just spent time playing. Later an NGO started a make-shift school in the camp, hiring a local instructor. A madrasa has also been running, for sometime. But how can this make up for the months of lost schooling? 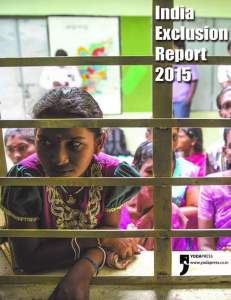 There was large-scale exclusion of children from education — many joined the ranks of child labour, helping their families in brick kilns or in other odd jobs in towns. There were no schools in camps, and it has been difficult to link the camps to nearby schools for a variety of reasons, the most important being the indifference of the local education affairs bureaucracy to the children in these camps and their inability to continue education there. Indeed, most displaced children in higher classes were unable to sit for their classes IX and X examinations, and only strong pressure by MAJMA constituents and other civil society groups prompted school and college administrations to integrate them. Girls have been specially excluded, poor perceptions of security being a chief factor in parents’ eyes. For those who have been able to return, this has not meant guaranteed resumption of pre-violence schooling. The head teacher of the boys’ middle school in Simbhalka village informed us of how out of the 11 Muslim students (out of 40 in all) before the outbreak of violence, only two have returned to school since. Factors like the months-long gap in schooling due to displacement, loss of books and uniform which were destroyed in the violence, and insecurity and uncertainty weighing heavy on victim families have meant that schooling has been severely compromised. The drop-out rate is highest among girls.

Victims informed us about how their livelihoods have been affected severely. As a victim from Kheda Mastan village said:

We came back to our village because life in the camps was desperate. But here we face the same problem of absence of employment. We were dependent on Jat patronage for much of our livelihood, as farm hands, ironsmiths, barbers and the like. We also feel insecure going into many Jat villages in the affected areas. All this affects our trade. We are now forced to sell off our belongings at throwaway prices to make ends meet.

Another victim told us:

We cannot leave our children alone and go out in search of work further afield. This has reduced our livelihood choices.

Kiwana has seen a large number of victims joining large gangs of labourers at the brick kilns in the village. This is not the work of choice for most, given the exploitative conditions and the need to press entire families into work. However, public wage employment schemes do not work, particularly for Muslims, thus offering no escape from the trap. In Kheda Mastan village, Muslim residents claimed not to know anything about NREGS — the flagship national wage employment scheme—showing how little public programmes work for them.

Overall, the violence and breakdown, and dislocation in survivors’ lives has resulted in their pauperisation: those who were mobile shop owners, cloth merchants, artisans and other artisanal classes were reduced to taking up unskilled work, in agricultural fields, brick kilns and the odd daily wage to make ends meet. For women who were engaged in agricultural work or home based activities (sewing/tailoring) before the violence, even these options have been closed due to security and dignity concerns. (A Study on the Status of Women Riot Survivors: State & Non-State Efforts towards Response & Rehabilitation, Oxfam India.) Furthermore, there is a poor social safety net to compensate for this loss of livelihood. There is weak uptake of NREGA among women (due to reasons ranging from low wages, patriarchy, poor awareness, and a broken NREGA administration) and the situation is not much better among men as well. 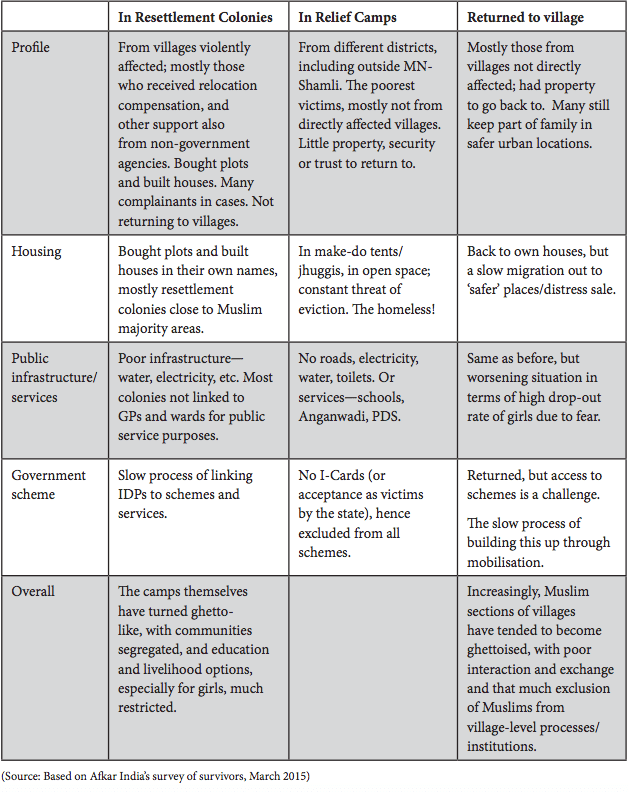 Profiles of the displaced: this box provides a snapshot of the life of survivors
(categorised here into three groups, by type of habitation) and their access to services, a year after the devastation.

Finally, the violence has left a permanent divide between communities. Given the largely rural context, pre-violence relations between ‘victims’ and ‘perpetrators’ were intimate. Violence, in such a situation, has left a deep imprint on people’s psyche. Trust has been destroyed.

We have been betrayed. We have lost faith in the Jats. Those whom we considered our own, our neighbours, attacked us. How can we forget that?

The damage has been so high that I am afraid relations will not be better for a long time. Maybe never. Political parties, both BJP and SP, have played politics with us.

Along with this has come homogenisation of habitations, with Muslims moving into Muslim majority areas and mixed habitation pockets divested of Muslims, resulting in greater polarisation.

‘These riots have shown me how perfectly normal people can become stubborn Hindus and Muslims. The community has been badly polarised. We were not like this. This is not good for society.

Excerpted from the chapter Survivors of Mass Communal Violence in Muzaffarnagar: profiles of loss, dispossession, and recovery by Sajjad Hassan, published in the India Exclusion Report 2015 by Yoda Press. http://thewire.in/2016/05/27/betrayal-in-muzzafarnagar-a-profile-of-the-survivors-of-mass-communal-violence-38671/