Between The Buddhists And The Yuddhists 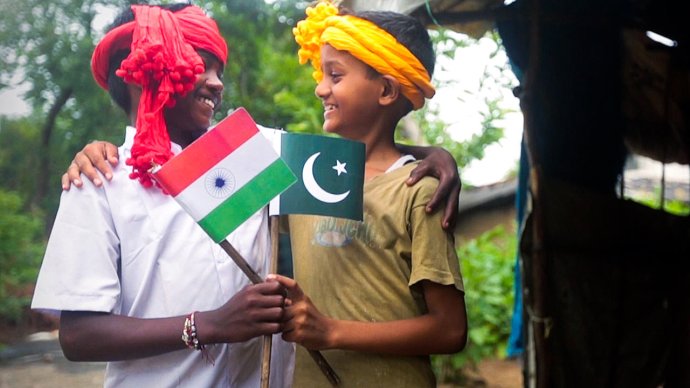 `We go from yuddha (war) to Buddha (peace). Sometimes war is necessary. But our path is that of Buddha’ – Narendra Modi at Ramlila in Lucknow.

The philosopher Narendra Modi is right. The conflict in the region is between Yuddhism and Buddhism. Earlier, when the BJP Prime Minister Atal Bihari Vajpayee was ruling India and when the credibility of BJP was going down at a national level, he tried the same trick to win over the credibility from hatred politics. He exploded the nuclear test in Pokharan, a test of the most violent technology and called it Buddha Smiles. Time was when peace was ruling the entire South Asia as far as international relations were concerned. That peace was broken by the Yuddhists. The Yuddhists in Pakistan responded with another nuclear test and India responded again. Kargil war followed. The Muslims in this country were called Pakistani agents. The broken chairs of the political leadership in India and Pakistan were repaired with the propagation of this hatred politics. Mainstream media on both sides were happy to generate so much sensational fiction to be pushed as news. Ultimately, who were the losers?

What was even more interesting at the time of explosion of Buddha Smiles was that the George Fernandes who was the Defence Minister in India at that time was not aware that India was exploding a nuclear test. He came to know about it only when the press started ringing him up in the morning. Their question was: Who is the enemy?’ The confused George Fernandes responded with confidence:China!’ Well, he had to correct himself and name Pakistan as the enemy after three days. For a moment, he forgot that he was a defence minister under BJP leadership. What remained as history was that the only thing Atal Bihari Vajpayee could do to ensure his position as a Prime Minister was spreading the politics of hatred through war. And both the leadership in India and Pakistan gained from such politics of hatred.

History is repeating again at a time when the credibility of Narendra Modi is dwindling. He is absolutely right when he says: `Some times war is necessary.’ The question is for whom? When there is a war between two nuclear states happen, there are no ultimate winners. There are only losers.

And what is the justification? We are having a war against Terrorism’. This is exactly what George Bush tried in Afganisthan and Iraq and killed innocent people, women and children. The question to the those who conducted the surgical attacks is: Did you kill the terrorists or ordinary soldiers who were sent from their homes for a secure job to meet the needs of their family? And what about the claims of the number of people killed in the surgical strikes? The Indian media reports a figure around two dozen. Pakistan says the number of people killed is 2. Deshabhimani, the party newspaper of CPI(M) is one step ahead over BJP and Congress in proving their patriotism. Their number was 36. Earlier in history, when the nuclear test in Pokharan took place, the immediate response of CPI(M) was in favour of the nuclear bomb as adeterrant’. But when the anti-nuclear activists came out in the open, they were sensible enough to join and support the movement against nuclear bomb.

Then there is this boy called Rahul Gandhi. He has been trying to question Narendra Modi whenever he turned here or there. But when it comes to war, he declared that the only sensible thing that Narendra Modi has done in his life was war with Pakistan. If this boy becomes our Prime Minister. what would be our fate?

What the people in India and Pakistan should learn is from their own history, if there is a need for peaceful living on both sides. We have already lost many lives in this game of hatred politics right from partition onwards. If the right to live in peace is not asserted right now, the danger for the existence of people in India and Pakistan will show its ugly face soon.

Recently, I was travelling in an auto rickshaw in Cochin with the editor of Countercurrents.org when the driver started speaking about war. He was too happy about the surgical strikes. We cautioned him that `if the war takes place and Pakistan responds and then India responds and then Pakistan responds further, probably there may be a bomb falling on top of your auto rickshaw’. With full confidence, he said that Pakistan does not have the technology to do that. Both of us smiled at each other. The driver thought that the war is something which will happen only in the borders and Cochin is a far away place from India. When we explained that the possibility of having a bomb on his head is real, he kept quite for some time.

Pritam Singh is a respected Indian academician in UK. But let us have a look at the Pakistan counter parts. Al Jazeera reports: `A prominent journalist has been put on Pakistan’s Exit Control List after the respected Dawn newspaper published his scoop that appeared to confirm long suspected rumours of a rift between the country’s civilian and military leaderships.The Exit Control List is a system of border control maintained by the Pakistan government under an ordinance which allows it to bar people whose names appear on the list from leaving the country.Cyril Almeida, Dawn’s assistant editor, pointed via Twitter on Monday to his name’s appearance on the list. The Pakistani authorities have yet to comment on the development’.

The truth of the matter is that both Pakistan and India are afraid of the same thing. That the truth will come out in public one day or the other. Their games will be exposed! Therefore, both do not want any critical comments on their games, playing with the lives of people in this sub-continent.

Narendra Modi’s confusions are real. He does not know whether he is Yuddhist or a Buddhist or a Hindu. For Buddhism might have originated in this landscape, but it was the Brahminical lobbies which threw Buddhism out of this country with their Yuddhist principles, since Buddhism preached against caste discrimination. When the architect of Indian constitution, Babasaheb Ambedkar converted himself into Buddhism, there was no need to get a clearance certificate from the Indian State for his conversion into another religion. But over the years, the Hindutva forces have pushed such laws in this country against conversion in many states that if Ambedkar were alive today and if wished to convert himself to Buddhism in Odisha or Chattisgarh, even he would need to get a clearance from the Indian State. Those who argue that religion is just a matter of personal faith, please take note of this current scenario. If religion is a matter of a subjective faith, you must have the freedom to change your faith if you wish to. The Indian Constitution allows you that religious freedom. But many states in India have violated this freedom granted by the Constitution, by passing laws violating the religious freedom of the people.

The immediate repercussion on the war mongering lunatics today is faced by the Bollywood. The Bollywood might have survived by selling stories with less IQ level that of high school students in India for a long time. But this industry also is a strange collaboration of Muslims, Hindus, Christians, Atheists and people of other faiths. This dream industry has survived only through the active collaboration of diversities, for the purpose of fame and money. And now, not only the artistes with a different nationality are targeted, even the directors with a baggage of many successful films are targeted for casting Pakistani actors. An actor is an actor, whether you are an Indian or a Pakistani. If a Hindu can act as a Muslim and if a Muslim can act as a Christian and if a Christian can act as an atheist and if an atheist can act as a poojari, then a Pakistani can always act as an Indian, provided the legal requirements of passport and visa are cleared. It is not stated anywhere in the Indian Constitution a Pakistani can not act as an Indian. They are artists who are treated as characters in a story they represent and the moronic film goers have accepted them as characters of their imagination more than the roots of their identities. If this move of the Hindutva forces to generate communal politics through the film industry succeeds and if Pakistan responds in similar fashion, they could easily block Hindi films in Pakistan. Since we don’t show much of Pakistani films in India and since the Bollywood is also thriving in Pakistan, it will be the Indians, the Bollywood and the foreign exchange for the Indian Government that will be the losers. Can anybody generate some sense to the proponents of this mindless drama? Since the film industry in Asia is going to be the victim of war, there is now a strong reason for the artists, writers, poets, film and cultural personalities on both sides of the border to come out and expose this bluff.

Yes, Narendra Modi seems to be right in one angle. The conflict seems to be between Buddhists and Yuddhists. But between Buddhism, Yuddhism, Hinduism and Hindutva, our Prime Minister seems to be having an identity crisis. And the smell of war has already been spread. What this smell can do with the existing wind to the peace loving citizens of South Asia, remains to be seen. But it does not require any astrological prediction to understand that we are going to face difficult times under the Yuddhists in India and Pakistan. It must also be understood by the Hindutva forces that if India attacks Pakistan, it will be attacking the land of their own historical roots, since the ancient remnants of Mohanjadaro and Harappa are still in Pakistan and not in India. Therefore the need for peace must be articulated from the side Hindutva forces and emerging nationalists as well.

Time has come for those who believe in justice, peace and harmony in India and Pakistan to come out and put an end to this growing war mania. Time has come for the civil society, human rights activists, film personalities, writers, poets and cultural personalities on both sides to raise their voices with realisation that if such an action is not undertaken now the war mongers will play with our lives. Time has come to unite against the Yuddhists in India and Pakistan and to generate a strong public message that the sensational mainstream media, the corrupt army officials, and the politicians with their dwindling power mechanism and shrinking images on both sides do not own the share market of our freedom, peace and harmony. Time has come to isolate the Yuddhists on both sides. If the people across the boundaries can not protect their peace, then who else can?

K.P. Sasi is a film maker and activist. He can be reached at [email protected]