Their act of weaving in religious discourses with science is a clever ploy to appeal to the urbane middle class.

The comments of Jaggi Vasudev warning people not to eat during lunar eclipse, delivered a few years ago in a faint American accent (or what passes for it), had the social media abuzz recently with a great deal of support coming from people one would least expect.

During lunar eclipses, what would happen in 28 days over a full lunar cycle is happening in a subtle way over the course of two to three hours of the eclipse. In terms of energy, the earth’s energy is mistaking this eclipse as a full cycle of the moon.http://isha.sadhguru.org/blog/lifestyle/food/food-and-lunar-eclipses-bad-combo/ …

Why Eating Food During Solar & Lunar Eclipses is Harmful

Eclipses can have a powerful effect on the human body. Here’s why eating food during an eclipse – solar or lunar – can have a harmful impact on the system.

Why Eating Food During Solar & Lunar Eclipses is Harmful

Eclipses can have a powerful effect on the human body. Here’s why eating food during an eclipse – solar or lunar – can have a harmful impact on the system.

When the Puri Shankaracharya had claimed that computers have origins in the Vedas, it was business as usual. For a person with a cosmopolitan background, pooh-poohing the obvious eccentricity of staunch orthodox traditionalists like the Shankaracharya or some unsophisticated vernacular hothead when they make such comments, is to be expected. But Jaggi Vasudev is not in the same league. He is a self-styled, new-age guru whose philosophy and agenda are represented by his activities through his Isha Foundation and he has steadily been gaining a follower base among the educated middle class in India and among Indian expatriates in the US and other countries.

The same people who will not accept the gobbledygook of the Shankaracharya or that of a retired judge who says peacocks reproduce through tears, will give a lot of credence to the opinions of a Sadhguru or a Sri Sri Ravishankar, packaged as they are in pseudoscience, faux academic sophistry and very good English.

Their act of weaving in religious discourses with science is a clever ploy to appeal to the urbane middle class. Using intelligently misrepresented scientific concepts, strewn with fallacies and red herrings, they deliberately dismantle the method of scientific enquiry so that their followers adopt their supposedly superior world views.

Tired and oft-repeated revivalist clichés are infinitely more attractive when they come with quantum physics, quarks, bosons and cosmic rays.

This attractive presentation of orthodoxy, a sweetened pill for the cultured elite with deep pockets, is part of the soft gateway into the Sangh Parivar universe of beliefs that is being carefully crafted for some years now. A year ago year ago, on March 25 and 26, a workshop titled “Gyan Sangam”, was organised by the RSS-affiliated Prajna Pravah at the Maharaja Agrasen Institute of Technology and Management. Their purported aim? The need for a “real nationalist narrative” in higher education.

As many as 721 academics, including vice-chancellors of 51 central and state universities, deliberated at a two-day closed-door seminar-cum-workshop, on how to “Indianise” the educational system of the country.

“This seminar is not organised to raise an alternative narrative, but to raise the true nationalist narrative in our educational system,” RSS chief Mohan Bhagwat had said during the proceedings.

The event was sectioned off into a series of sessions on international relations, political science, history, science, and archaeology with “expert sessions” on subjects like cultural “onslaught”.

Prajna Pravah national convener J Nand Kumar told reporters that the academics had “resolved to make an effort at their level” to develop a “Bharatiya” perspective in education. “… it is the duty of our academicians to decide on the content of education. If you go through the science syllabi in our universities, it is all about the West. We are not teaching our students the contributions of Indians in science.”

It has been one year since that seminar and except for repeated muscular assertions that practically everything under the sun had already been discovered or invented by the ancients of the Vedic age, there have been no fresh insights or practical applications of that ancient knowledge in the science and technology that governs our daily lives. Neither has it manifested in our town planning, our architecture, alternative power sources, nor our environment protection.

The transition of the model of a pluralist and syncretic India, to a protectionist India that sees cultural osmosis as an “onslaught” and threat to society, has been the RSS project for over half a century.

“Prajna Pravah is rational umbrella that stimulates, trains and synthesises individuals to recognise the inherent strength of Bharath with academic vigor directed towards decolonising Indian minds from Eurocentric impact. It functions with the sole vision of uplifting and reviving Hinduness in culture for emancipation of humanity. Hindutva being assimilative and self-sustaining has the potential to liberate world from arrogance of power accumulated through dictatorship policies of the west. Prajna Pravah upholds the vision of incorporating the theme of nationalism in spiritual terms so that national intellect evolves with broadened dimension lifted above economic and political context and foster a sense of innovation and creativity towards benign outlook.”

This year, once again on January 27-28, a group of intellectuals and academicians along with Prajna Pravah of Rashtriya Swayamsevak Sangh held a seminar at the Indian Institute of Mass Communication, New Delhi. 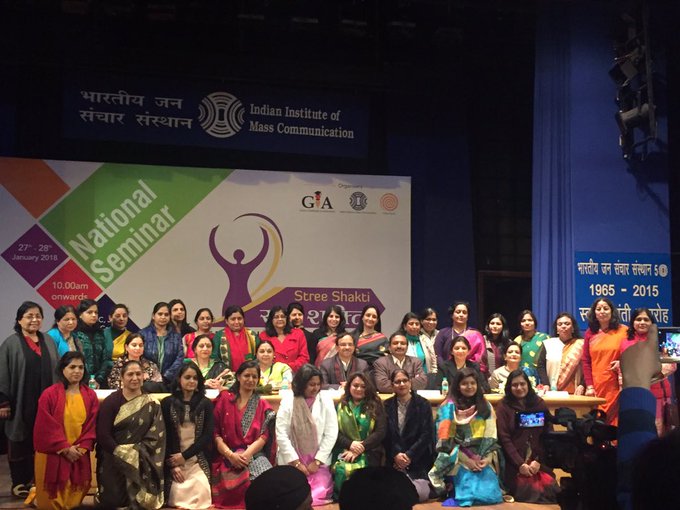 The #Proud team of GIA Foundation , Prajna Pravah and IIMC who worked tirelessly to make this two day revolutionary seminar on #StreeShakti ‘ Bhartiya Thought and Practice’ a success. #StreeShakti2018

Poonam Kumria, seminar convener and associate professor of Geography at Miranda House Delhi University, said, “The basic aim of this seminar is to entrust faith in Indian values when it comes to gender roles, we need to recognise the indigenous model of feminism. Why do we look at Indian women from the lens of western perspective? Do we not have our own logic?”

Looking past the impressive jargon, here are Hindutva’s “own logic” about women:

“Crimes against women happening in urban India are shameful. But such crimes won’t happen in Bharat or the rural areas. You go to villages and forests and there will be no such incidents.”

Bhagwat also held forth about women being “contractually bound” to do housework for their husbands. Later, he clarified that he meant this as a criticism of “western” marriages, not as a prescription for all marriages.

Krishna Sharma, leader of the VHP’s women wing, elaborated in an interview, “It is the man who must earn and support his family (while the women manages the household), his education is more important. This division of labour is natural.” (Quoted in Women and the Hindu Right: A Collection of Essays)

Clearly, Bhagwat’s ideas on women being bound to housework are not accidental; RSS leaders say this as a matter of course.

In the same interview, asked, “What advice would you give to a victim of wife-beating?”, Krishna Sharma had replied, “Don’t parents admonish their children for misbehaviour? Just as a child must adjust to his/her parents, so must a wife act keeping in mind her husband’s moods and must avoid irritating him. Only this can keep the family together.”

Krishna Sharma’s words on wife-beating are echoed verbatim by Sharda, a Rashtra Sevika Sangh activist, when a reporter recently asked her about wife beating. President of BJP Mahila Morcha, Mridula Sinha, had similarly told the Telegraph, 1993: “I gave dowry for my daughter and received dowry for my son…. Wife-beating is bad, but if it has to be done to bring the woman on proper track it’s all right… Women in their own life should not take independent decisions about marriage and other things. The family should take these decisions.”

RSS founder, MS Golwalkar held that Manu was the “first and greatest lawgiver of the world”, and suggested that the Manusmriti, which is abhorrent and discriminatory towards women and deprived castes, should be the Constitution of independent India. In Golwalkar’s Bunch of Thoughts, the chapter “Call to the Motherhood”, asks Hindu women to avoid being “modern”.

According to Golwalkar, women who enjoy the freedom and equality of modernity, lack in virtue and think that “modernism lies in exposing their body more and more to the public gaze”.

At the seminar, Kumari went on to say further that, “For women family is more important so as a supplementing act they work at home. The feminism we see now has created contradictions when there are not any in reality,”

And from their concept note:

“Third World feminism has been largely influenced by theories and paradigms in feminism, coming in from the first world [countries]. These have not been accepted without critique. It appears that in India contemporary feminists have been manipulated through marketing and mainstream media and sold a clichéd lifestyle as politics and political opposition. Thus while it is feminist to consume the latest clothes and addictive substances that the market offers, these remain lifestyle choices rather than opposition to patriarchy.”

But what is ominous is the statement the Prajna Pravah came out with last year in its workshop on Indian values on the “culture of protests”.

Nand Kumar objected to the “culture of protests” or even the practice of “cultural evenings” in the educational institutions and called them not part of “our real culture”.

When you add a clampdown on skepticism and inquiry with xenophobia and revivalism, it is a toxic mix for the state of education in any country.

Obviously, nothing of the authoritarianism or patriarcy has changed since the time of Golwalkar except for the post-modern jargon. Words like “epistemic dichotomies” do not hide age-old intentions.

But like the Sadhguru’s mumbo jumbo, it does make an impact on the educated middle class, superficial though it may be.https://www.dailyo.in/politics/sadhguru-jaggi-vasudev-eating-food-lunar-eclipse-rss-hindutva-mohan-bhagwat-vhp/story/1/22172.html