Between January 1, 2017 and September 18, 2018, one manual scavenger died every five days.
He is no caped superhero, but Bezwada Wilson continues to fight the good fight for manual scavengers, says Manavi Kapur. 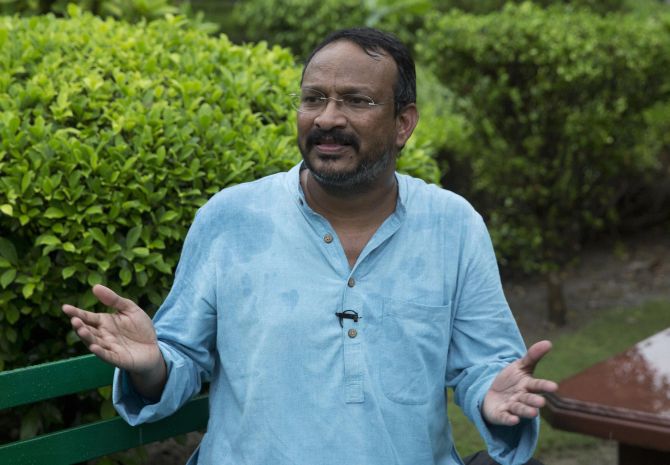 IMAGE: Bezwada Wilson, a campaigner for eradication of manual scavengering, was awarded the Ramon Magsaysay Award in 2016. Photograph: PTI Photo

‘To those who say that these things do not happen here, to those who want to claim a superior status for the Indian civilisation, I say that only those who have suffered this anguish know its sting,’ Om Prakash Valmiki in the preface to Joothan, 1997.

Bezwada Wilson knew nothing of anguish in his early childhood years.

“My parents worked hard to give me an insulated life, filled with love,” he recalls. Till he was five or six years old, he had no inkling of his place in the social order.

Born to parents who were manual scavengers, Wilson did not know that his older brother was one too. “It was only once I grew older that I realised I wasn’t as ‘normal’ as my parents would have me believe.”

There is little about Wilson’s life that qualifies as “normal”.

Born in 1966 in the Kolar Gold Fields region in Karnataka, Wilson understood the harsh reality of his social identity only once he became aware of his family’s profession.

“It disturbed me to think that we are not equals, that no matter what my parents do at home, we will all be treated poorly in the world outside,” he says. 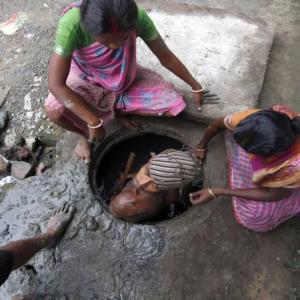 At school — Wilson briefly studied at a social welfare school in Andhra Pradesh — he would often be conferred with derogatory monikers that he didn’t yet understand. “I was staying in a hostel that housed a mix of caste groups. There was a sense of high-handed benevolence that made people say, ‘I treat you as equal’.”

But, for the first two decades of his life, this sense of injustice remained a dimly understood, passive reality.

It was when a 20-year-old Wilson was studying science at a college in Kolar and tutoring school children that he first encountered the familial impact of manual scavenging, where children dropped out of school because their parents couldn’t pay the fees.

The Kolar area employed a large number of people to manually clean human excreta from dry latrines. The manual scavengers spent a sizeable portion of their incomes on alcohol, to numb the pain of their soul-crushing drudgery.

The first time Wilson witnessed a manual scavenger at work, he broke down in tears.

That day, he spoke to his parents about what he had seen. And was shocked by their reaction — they told Wilson they had been manual scavengers all their life.

“What is striking is how this is a community that exists in total silence. Do you know that young men who get married don’t even tell their wives they are manual scavengers? Most of these workers finish their work, come home, eat and sleep. The task of cleaning people’s s*** every day leaves them unable to express their own disgust,” he says.

Wilson never loses his cool or his smile, but he speaks with a fierce passion and empathy.

“Very, very abnormal things are normalised for this community. People complicate the manual scavenging debate by saying it is a layered issue,” he says. “But it is simple-simple. As a society we like to make it look difficult so that we can escape responsibility.”

Wilson speaks in English, using Hindi to emphasise some points, but employing no euphemisms that might dilute the force of his argument.

Over the years, he taught himself English, a language that also gave him access to the social and intellectual capital of the Dalit community, including the works of B R Ambedkar.

Between 1986 and 1993, Wilson travelled across the country to meet workers and fully understand the role manual scavengers played. But the final push came from women in these communities, he says.

“Looking at their agony, I was propelled to do something more concrete. It was this emotional flooding that gave shape to our movement,” he says.

Wilson moved to Hyderabad in 1993 and met Dalit’s rights activists Paul Diwakar and S R Sankaran. Together, they formed the Safai Karamchari Andolan, a community-driven movement to mobilise manual scavengers.

The year 1993 was also when the government made its first move to abolish manual scavenging with the Employment of Manual Scavengers and Construction of Dry Latrines (Prohibition) or EMSCDL Act. But the Act was termed largely toothless by those working with cleaners, sweepers and sewage workers.

“The administration, both central and state, is a big stumbling block for change. They resisted all overtures we made so that they could maintain the status quo,” insists Wilson.

For instance, under the 1993 Act, most states would claim that since they had no dry latrines there was no question of demolishing them.

“Officers would deny data and refute facts. It was a constant, frustrating battle then and continues to be so today.”

When the states began refuting deaths caused by sewage accidents and inhaling poisonous gases, Wilson enlisted volunteers to estimate the number of deaths and report them. “But this approach also meant that human life was merely being represented as data. It did not address how we could prevent these deaths,” he says.

This prompted him to hop on to a train to New Delhi in 1993 with a general compartment ticket.

“I thought I would file a case in the Supreme Court. But, of course, reaching Delhi opened my eyes to how complicated it is to get just the paperwork done,” he says. His gumption did not go unrewarded, though.

He met several like-minded people in Delhi, including lawyers willing to guide him. With advocacy groups, manual scavengers and activists, he filed a public interest litigation in the Supreme Court that year naming all states and government departments — the Railways, Defence, the Judiciary and Education – as violators of the Manual Scavenging Prohibition Act. The case is still sub judice.

The law was replaced with the Prohibition of Employment as Manual Scavengers and their Rehabilitation Act, 2013, which was to have a wider scope and impose greater penalties than the 1993 law.

Activists like Wilson have repeatedly pointed out that the new Act is an update only in name. Without specifying a solid implementation mechanism, laws like this are just lip service, he believes.

Wilson has been relentless with his questions — many seem obvious, such as why the Indian Railways continues to employ manual scavengers. His forthright questions are neither naïve nor hostile, but they make one shift in one’s seat.

“I will never forget the attitude of politicians and bureaucrats,” he says. “They would sit with their arms crossed, with a bored expression, and ask me, ‘Haan, toh kya karnachahiyehumein? (So tell us, what should we be doing?)’ Basically, what they are saying is that we cleaned their s*** for these many years and now we must find a way out of it. This is just another form of modern slavery.”

His passionate work has not gone unnoticed, though.

After he was conferred the prestigious Ramon Magsaysay Award in 2016, he was at the forefront of the India Sanitech Forum in 2017, a platform for tech innovators to showcase automation models for sewage cleaning.

Wilson also advises academics at leading institutes, such as the Indian Institute of Technology Bombay, on designing sewage-cleaning machines that eliminate the need for exposure to deadly gases and infections.

In 2014, an IAS officer thought Wilson’s work was done — the prime minister had announced the Swachh Bharat Abhiyan on October 2. “He told me, ‘Bezwada aaple lo (You should retire now, Bezwada)’,” he laughs.

“Four years later, here we are. Nothing has changed.”

“Do you see what’s happening here? We are purposely missing the point,” says Wilson. And yet, his gumption has not waned nor his resolve weaken