RSS–BJP affiliated think tank Bharat Niti has planned a massive ‘Hinduism and Social Media Conclave’ in November in the holy city of Kashi with Yogi Adityanath as its chief guest. 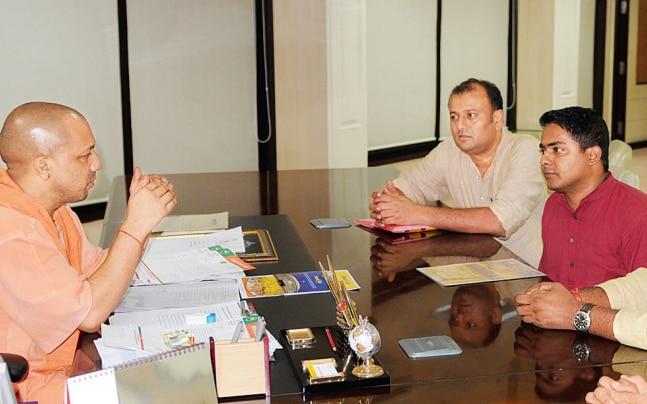 Bharat Niti has planned a â€˜Hinduism and Social Media Conclaveâ€™ in November in Varanasi. Yogi Adityanath is the designated chief guest for the event.

Now Hinduism and Hindutva would be protected and propagated by an army of online warriors.

The right-wing aims to raise a dedicated unit of virtual soldiers from among its Internet and social media savvy cadre to “protect Hinduism from being deprecated and its symbols desecrated on online platforms by people inspired by leftist ideologies or Islamism”.

The online route seems in line with the social media presence of the BJP-RSS complex of organisations and the fact that the PM is one of the most followed people on Twitter in the world.

“It has become the order of the day that miscreants post defiling material on social media websites so as to hurt the feelings of the Hindus,” Shailendra Sengar, member of the management team of Bharat Niti, told Mail Today. “They make fun of our Gods and Goddesses. At times it has been seen that more than making fun, they post things that are directly sacrilegious. We shall be discussing at the Kashi meet how we can stop and counter such propaganda as also we shall put our heads together to find ways to propagate Hinduism through high-tech means such as social media and online platforms.”

Sengar, who is also the newly appointed vice president of BJP’s Kisan Morcha, told Mail Today that Uttar Pradesh chief minister Yogi Adityanath, who has come to be seen recently as the new and more aggressive face of Hindutva politics, is the designated chief guest for the event. BJP-RSS ideologues such as Murlidhar Rao would also be attending the meet. Rao is a leading right-wing economic ideologue and the mentor of Bharat Niti initiative.

“We have accorded our invitation to the chief minister of Uttar Pradesh and he has expressed his desire to attend. He was very happy at the initiative,” Sengar said.

Academics, such as commentator on Hinduism David Frawley, would fire the zeal of the web soldiers on the occasion, Sengar said, adding, “Sadguru Jaggi Vasudev of the Isha Foundation along with such luminaries as Acharya Balkrishna of Patanjali Ayurveda and commentator/columnist Advaita Kala will also grace the meeting with their presence and share their insights for what we want to achieve.”

There would be a special session to focus on the subject of cow and the sanctity it carries in the Hindutva belief system. Bharat Niti is an initiative to encourage objective study and in-depth analysis by citizens, policymakers, domain experts, researchers and commentators, on varied issues of national and international importance. It is a wide platform to bring various stakeholders together to deliberate and propose public policy in the wider national interest.