The court has said that Varavara Rao has to stay within the jurisdiction of the Special NIA Court for the six-month period. 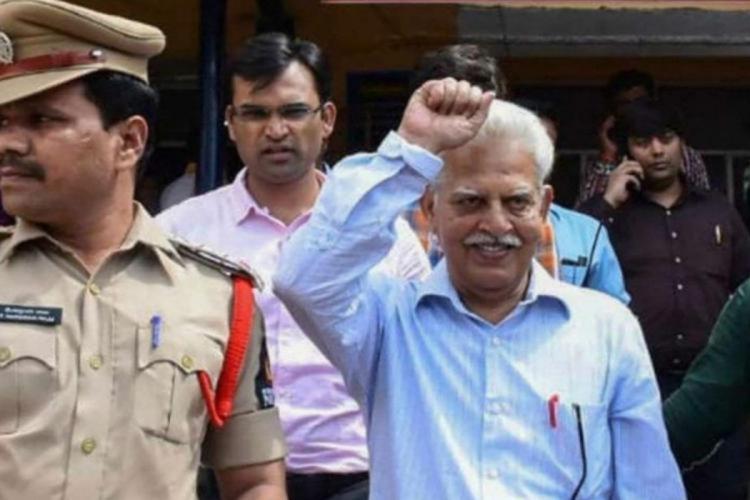 The Bombay High Court on Monday granted bail to Telugu poet Varavara Rao for six months on the condition that the 81-year-old has to stay within the jurisdiction of the Special NIA Court and that he will not indulge in any activities or similar activities which led to the registering of the FIR against him. The court also said that Varavara Rao, who was jailed in connection with the Bhima Koregaon Elgar Parishad case, has to report back to Navi Mumbai’s Taloja jail at the end of six months where he can either surrender or seek an extension.

“With all humility and human considerations, we are of the opinion that this is a fit case for allowing the relief. We feel that with the condition of the under trial, it would be inappropriate to send him back. It would be appropriate to impose such conditions. Varavara Rao has to attend trial whenever necessary, but can apply for exemption from physical appearance,” a bench of Justices SS Shinde and Manish Pitale said according to a report from Bar and Bench.

The bench, however, imposed several stringent conditions on Rao’s bail. The HC said it was mindful of the NIA’s apprehension that once out on bail, Rao might do something to adversely impact the probe into the case. Hence, it directed Rao to stay in Mumbai, within the jurisdiction of the NIA court in the city.

The bench also said Rao must deposit a personal bond of Rs 50,000 and two sureties of the like amount. It also prohibited Rao from establishing contact, or making national or international phone calls to his co-accused or even anyone else engaged in “similar activities”.

Rao will also have to attend all case hearings, respond to court summons, and make fortnightly WhatsApp video calls to the Mumbai police. The court also said a large number of visitors cannot be allowed to meet Rao, and directed him to submit his passport before the NIA court.

The court also prohibited Rao from making any statements related to the case before the press, and indulging in any activity similar to what led to the FIR against him. It permitted Rao to seek exemption from personal appearance before the NIA court.

The court also refused to grant the request of Rao’s lawyer Anand Grover for permission to the activist’s lawyers to meet him.

Reacting to the bail, N Venugopal, who is the poet’s nephew and also the editor of Veekshanam said he is in Hyderabad and has only just heard about the development. He said if the court has imposed a condition that Rao should remain within the jurisdiction of the NIA court, it means that Rao has remain in Mumbai. “I can only respond after reading the full order,” he said.

Varavara Rao, who had contracted COVID-19 when he was in jail, had moved the Bombay High Court seeking bail citing his health and that he required constant monitoring and medical aid that the Taloja prison would be unable to provide.

The Bombay High Court had earlier said that the NIA and the Maharashtra government should consider the age and health of the poet-activist while making submissions on his bail plea. The court had also remarked that a speedy trial was considered a fundamental right of a citizen and in the present case, charges were yet to be framed and 200 witnesses were still yet to be examined.

Varavara Rao was among the many human rights activists were arrested in 2018 for alleged links with Maoists following the Elgar Parishad meeting held in Maharashtra’s Pune district on December 31, 2017.  The case related to alleged inflammatory speeches made at the ‘Elgar Parishad’ conclave, which, the police claimed, triggered violence the next day near the Koregaon-Bhima war memorial located on the outskirts of the western Maharashtra city. The police have claimed the conclave was organised by people with alleged Maoist links. Several activists and academicians have been named as accused in the case. The case was initially probed by the Pune police and later it was handed over to the NIA.

Rao was being treated at the state-run JJ Hospital ever since his arrest in June 2018. Following the HC’s directions, he was being given treatment at Nanavati hospital.

Apart from Rao’s bail plea, a petition has also been filed by his wife, where she has alleged that Varavara Rao’s continuous imprisoning without adequate medical care is impeding his fundamental right to life guaranteed by the Constitution of India.

India - Is the PM holding out a threat to Gujaratis?
India - People being starved to death by the Govt. in the name of Aadhaar and DBT
Journalist Naveen Soorinje granted bail #goodnews
Prashant Rahi Bail Judgement