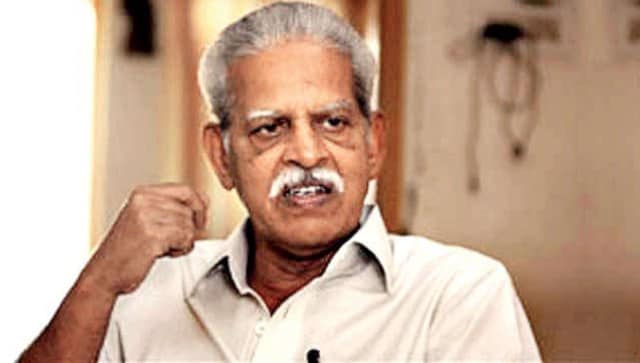 It also expressed concern at the delay in hearing Rao’s bail application which was last heard by the High Court on September 17 when one of the judges in a two-judge bench recused himself from the case. The Court also directed the High Court to examine whether Dr. Rao would be required to be treated in a speciality hospital.

A bench of Justices U U Lalit, Vineet Saran and Ravindra Bhat was hearing a plea filed by Dr Rao’s wife seeking the release of her husband on the ground of inhumane and degrading treatment meted out him in the prison amounting to the violation of his Right to Life which includes Right to Health and Right to Dignity under Article 21 of the Constitution.

During the hearing, the bench put three points across to Senior Advocate Indira Jaising who appeared for the petitioner. Firstly, a competent court i.e Bombay High Court had taken cognizance of the case. Secondly, the High Court was already seized with the matter of his bail. Finally, the High Court was looking into whether bail should be granted either on merit or on medical grounds. “Then how can we hear the case now?”, asked Justice Lalit.

Though the bench eventually did not order the release of Dr. Rao, it granted liberty to the petitioner to approach the Bombay High Court highlighting the violation of Dr. Rao’s Fundamental Rights to Life on account of the inhumane conditions of his detention.

Senior Advocate Indira Jaising, for the petitioner, submitted that Dr. Rao was completely bedridden and being attended to by his co-accused, who are not medically trained persons. Jaising highlighted that Dr. Rao was on a urine bag that needed to be changed every 24 hours and hadn’t been changed for 40 days. This had caused him to suffer from further urinary infection and added to his medical woes.

“His soul is not being kept intact with his body”, Jaising argued.

She pointed out to the bench that the present petition raised issues of violation of the Fundamental Rights of the prisoner which was distinct from seeking medical bail.

“When State imprisons someone, it has liability for looking after health, necessary medical care or treatment. The necessary medical care, if not better, has to be of reasonably same standard which is expected by a person outside jail. The right as to medical treatment during illness is available to a prisoner. It is State’s obligation to look after the mental health of prisoners. Prisoners cannot be deprived of health services as that would be violative of protection conferred under Article 21 of the Constitution of India. In case of such a facility is illegally deprived of, it can be enforced by judicial intervention”.

Solicitor General of India Tushar Mehta appearing on behalf of the National Investigation Agency (NIA) argued that “I don’t see why other prisoners will not pray for similar relief.” At this Justice Ravindra Bhat retorted, “But that should not deter us. Every prisoner’s health is important and the state should take a liberal view in this regard.”

Jaising said Rao was sent back to jail from the hospital against medical opinion and it was a violation of the right to health.

The bench said as the cognizance has been taken, the apex court cannot say that the detention of the man was illegal and the issue of bail was already before the high court which could be on merits or on medical grounds.

It said as far as the medical grounds are concerned, the high court is seized of it as Nanavati Hospital report is also before it but what is bothering the top court is that the matter is not being heard after a judge recused from the bench.

Jaising said so much time has elapsed and the man’s condition has already deteriorated and there is reasonable apprehension that he may die in jail.

The bench told Jaising its concern is why the matter is not getting listed in the high court even after more than a month.

It asked Solicitor General Tushar Mehta why Rao was shifted out of Nanavati hospital to Taloga jail.

“We don’t like the idea of a fatality in jail,” the bench said and noted that the charge sheet in the case was filed before Special Judge, Pune in 2019, which had taken cognizance of the offence against the arrested person.

It further noted that Rao’s bail application was first taken up for hearing before two different benches and was last heard on 17 September.

Earlier this year, the poet-activist’s deteriorating health condition had caused national and international outrage after his family pleaded to save him from dying in jail. The poet is lodged in Taloja jail’s hospital which according to his wife, lacks medical facilities and is grossly ill-equipped to provide him with the care that he needs.

Dr. Varavara Rao was arrested in 2018 for his alleged involvement in the Bhima Koregaon case.

On May 30, after news of the state’s neglect of his health condition hit national headlines, he was quickly transferred to J J Hospital and quickly discharged two days later without any further information. Within a few days, his condition deteriorated further and he was readmitted to J J Hospital on July 13. Reportedly, when the family visited him at the hospital, he was found lying in a pool of urine without any nurse or attendant.

Later Dr. Rao tested positive for COVID-19 on July 16. He was shifted to St George Hospital and then finally to Nanavati Hospital on July 30. The Nanavati hospital, in its report, inter-alia noted that “considering the comorbid factors of age, persistent hyponatremia in the COVID 19 case, the patient will require close monitoring.”

On August 28, without informing the Bombay High Court or his family, the state discharged the poet and sent him back to Taloja Jail. He has been in the jail hospital ever since.

Earlier this month, Hemalatha had moved the top court and urged that during the pendency of the petition, the 81-year-old accused be released on temporary medical bail and be allowed to travel to Hyderabad to be with his family and loved ones.

It sought immediate release of Rao on the ground that his continued custody amounts to cruel and inhuman treatment, violating Article 21 of the Constitution (life or personal liberty) and violative of his dignity in custody.

The plea said: “The health condition of the Petitioner’s husband is very feeble and he suffers from various co-morbidities…When the Petitioner’s husband was arrested on 28 August, 2018, he had no neurological problems. It is therefore highly likely that COVID-19 and the fall that he had in St. George Hospital has led to neurological problems as reflected in the medical report filed by Nanavati Hospital dated 30 July “

An FIR was lodged against several activists including Varavara Rao, Gautam Navlakha and others by the Pune Police in January 2018 after the Elgar Parishad event was held on 31 December, 2017 that had allegedly triggered violence at Koregaon Bhima in Pune district the next day.

The police have also alleged that the accused in the case had Maoist links and were working towards overthrowing the government.

Several accused including Navlakha were booked under provisions of the Unlawful Activities Prevention Act (UAPA) and the Indian Penal Code.

Besides Rao and Navalakha, three others — Arun Ferreira, Vernon Gonsalves and Sudha Bharadwaj, are accused in the case.