Bhima Koregaon case:Going to jail at the time of the COVID-19 virus is “virtually a death sentence” 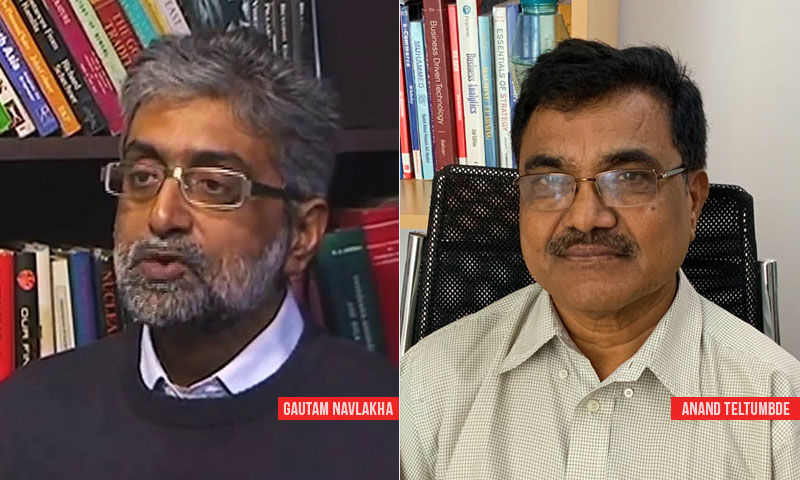 The apex court on March 16 had rejected anticipatory bail pleas of the activists, saying it cannot be said that no prima facie case is made out against them. It had however granted them three weeks to surrender themselves to the jail authorities.

Civil rights activists Gautam Navlakha and Anand Teltumbde sought more time from the Supreme Court on Wednesday for surrendering to prison authorities in the Bhima Koregaon violence case citing the coronavirus pandemic. Going to jail at the time of the COVID-19 virus is “virtually a death sentence”, they said.

The apex court on March 16 had rejected anticipatory bail pleas of the activists, saying it cannot be said that no prima facie case is made out against them. It had however granted them three weeks to surrender themselves to the jail authorities.RELATED NEWS

A bench headed by Justice Arun Mishra reserved the order on the plea of the activists after Solicitor General Tushar Mehta, appearing for the probe agency, said that this was only a mechanism to buy time and both the accused are facing serious charges.

The counsel for the accused said however that the activists are old having ailments and they be granted more time to surrender.

Earlier, the apex court, while dismissing the anticipatory bail pleas of Navlakha and Teltumbde, had said their petitions cannot be maintained in view of the bar contained in 43D(4) of the Unlawful Activities (Prevention) Act (UAPA), 1967.

Section 43D(4) of the UAPA bars grant of anticipatory bail to a person accused of having committed an offence punishable under this Act.

“The special leave petitions are, accordingly, dismissed. However, since the protection has been enjoyed by the petitioners approximately for one-and-a-half years, three weeks time from today is granted to them to surrender. The petitioners shall surrender their passport forthwith with the investigation agency/officer,” the bench had said.

Navlakha and Teltumbde had approached the apex court challenging the decision of the Bombay High Court by which it had refused to grant them anticipatory bail in the case.

The top court had on March 6 extended till March 16 the interim protection from arrest granted to both the activists.

The high court, while refusing to grant anticipatory bail to Navlakha and Teltumbde on February 14, had extended their interim protection from arrest for a period of four weeks to enable them to approach the apex court.

The high court, after perusing letters allegedly exchanged between the accused persons, had noted that Navlakha, Teltumbde and other accused like Surendra Gadling, Rona Wilson and Sudha Bharadwaj prima facie had access to and connections with central committee members and leaders of the banned CPI(Maoist).

Navlakha, Teltumbde and several other activists have been booked by the Pune Police for their alleged Maoist links and several other charges following the violence at Koregaon Bhima village in Pune district on January 1, 2018. All the accused have denied the allegations.

According to Pune Police, “inflammatory” speeches and “provocative” statements made at the Elgar Parishad conclave held in Pune on December 31, 2017 had triggered caste violence at Koregaon Bhima the next day. The police alleged that the conclave was backed by Maoists.

Teltumbde and Navlakha had approached the high court seeking pre-arrest bail in November last year after a sessions court in Pune had rejected their pleas.