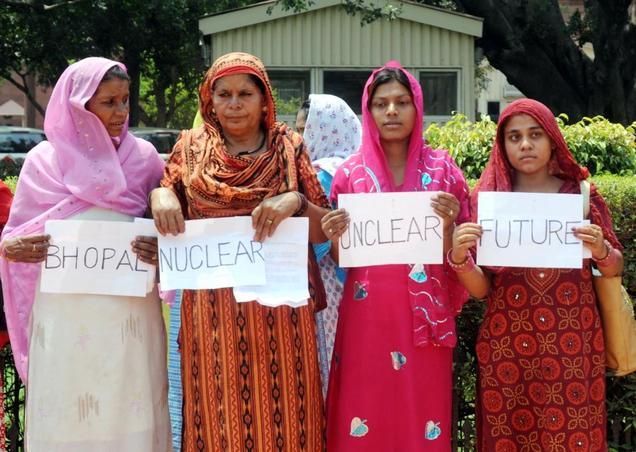 Munni Bee, a 68-year-old victim of the Bhopal Gas tragedy, underwent a tracheostomy at the Bhopal Memorial Hospital and Research Centre (BMHRC) on 11 March. Following this, she continued to battle for her life in the ICU of the hospital set up specifically to care for victims like her.

However, instead of being allowed to recover in peace, the hospital informed her that she and other Bhopal Gas-hit victims had to leave and seek treatment elsewhere as the BMHRC had been taken over by the Madhya Pradesh government for COVID-19 patients.

Munni Bee’s representatives rushed to the Supreme Court to challenge this decision of the state government. On 7 April, The apex court told her to approach the MP high court instead.

On 8 April, while the high court was still trying to develop a protocol for video conferencing hearings, Munni Bee passed away, her lawyer, Supreme Court advocate Karuna Nundy confirmed to The Quint.

While Munni Bee’s petition to the courts meant she was not forced out of the hospital, 86 other such patients of the 1984 tragedy were, and those who approached the hospital for treatment they used to go there for were also turned away.

Three Bhopal Gas tragedy victims have died because of this so far.

The Govt’s Decision on BHMRC

The BMHRC is a 350-bed multi-specialty hospital, established in 1998 on the directives of the Supreme Court to provide free health care to the gas tragedy survivors.

The state government had issued an order on 22 March stating that the BMHRC will be turned into an isolation and treatment centre solely for COVID-19 patients, and on the next day, took over the management and administration of the hospital, which now rests with the district magistrate.

On 24 March, the director of BMHRC issued an order that “all health care services” in the hospital will only be provided for COVID-19 patients and no one else.

Nevertheless, till date, no COVID-19 patient has been shifted there, and facilities reserved for them are lying empty.

On the basis of these orders, the hospital administration not only shut the OPD department, but also forcefully discharged 86 patients who were undergoing treatment (including dialysis patients) from the hospital between 23-24 March.

The administration even told the relatives of gas tragedy-hit patients in the ICU on ventilators (like Munni Bee) and seriously ill patients to shift to other hospitals, else face discontinuation of their treatments.

Thanks to Munni Bee’s petition, two others remain in the ICU on ventilators, while one remains in the cardiac care unit.

The Three Victims Who Were Denied Access to the Hospital

The three Bhopal Gas tragedy victims who died after being discharged or denied access to the BMHRC are:

Instead of leaving her fate to others, Munni Bee knocked on the doors of the Supreme Court to challenge the Madhya Pradesh government’s decision to discontinue treatment of all Bhopal Gas tragedy survivors.

In a joint writ petition to the Supreme Court, Munni Bee and the Bhopal Group for Information and Action (BGIA) challenged the orders of the state government and the hospital as being in violation of Articles 14 and 21 of the Indian Constitution. They asked the apex court to quash the decision to reserve the hospital for COVID-19 treatment, and to set up the isolation centre for COVID-19 patients in a different hospital.

When the matter was listed before Chief Justice of India SA Bobde on 7 April, however, the bench headed by him directed them to file their plea in the Madhya Pradesh High Court at Jabalpur, and they withdrew the petition to do this immediately.

The petitioners filed their plea in the high court on the same evening, but were unable to get a hearing there at the time of the writing of this article, as the Madhya Pradesh High Court is yet to finalise a protocol for hearing cases by video conferencing during the coronavirus lockdown, unlike the Supreme Court.

While Munni Bee has tragically passed away, the BGIA will continue to fight the case in the high court, Rachna Dhingra of the BGIA confirmed to The Quint.

A fresh urgency application has been filed in the court which will emphasise the condition of the remaining three patients.

What Does the Petition Argue?

The arguments raised in the petitions to the Supreme Court and the MP High Court are essentially the same.

First, it is outlined that the patients who have been suffering from Methyl Isocyanate poisoning as a result of the Bhopal Gas tragedy were more vulnerable than others to the coronavirus outbreak, and that the BMHRC is the only super-speciality hospital equipped to take care of their needs.

The petition informs the court that at the midnight of 24 March, the hospital had started discharging all patients, “including those with previous history of acute exposure to Union Carbide’s poisonous gas, from the Intensive Care, Surgical and Medical wards in the hospital.”

It is also affirmed that as of 24 March, “all the Emergency Services of the Casualty Ward of BMHRC have been closed,” along with the closure of “all the dialysis facilities from 25 March”. It goes on to be noted that the first COVID-19 patient to die in Bhopal was a Bhopal Gas tragedy victim.

“There are about 30 gas victims who undergo dialysis twice a week at the hospital, whose lives, without timely and quality dialysis, are in perennial danger.” the petition reads.

The plea further makes a case that such conversion of a specialised hospital to treat COVID-19 patients was a breach of the terms of the Trust Deed under which the Bhopal Memorial Hospital and Research Centre was set up under the directions of the Supreme Court from 1992-1998.“Proposal of an isolation centre to be set up for treatment of the COVID-19 patients by shutting down the entire hospital to Bhopal Gas tragedy victims in need of Intensive and urgent care is arbitrary and unreasonable as the BMHRC hospital has a total capacity of 350 beds.”Petition in MP High Court

The deprivation of these victims’ medical treatment “from the hospital which alone has the capability of addressing their specific healthcare requirements” is argued to be a violation of the right to life and health under Article 21 of the Constitution, they argue, which warrants the intervention of the high court as a guarantor of fundamental rights.

The petitioners also note that decision violates Article 14 of the Constitution, as the 3.5 lakh registered Bhopal Gas tragedy victims are entitled to exclusive care at BMHRC, which means taking it away from them (unlike designating another non-exclusive hospital as such) is a violation of substantive equality.

The “total apathy and indifference” of the government has also been called out, with the petitioners arguing that:“it is apparent that the State has adopted an arbitrary approach without application of mind, mechanically and has adopted a short cut approach to simply totally close down this medical facility for Gas victim patients without even exploring other options.”

In addition to the request to quash the reserving of the BMHRC for COVID-19 patients, Munni Bee and BGIA urged that there are alternate hospitals like Pulmonary Medicine Centre, Gas Relief Hospital, located in and near-by Jehangirabad, which can be used for COVID-19 patients instead of the hospital solely meant for the victims of the industrial disaster.

Finally, given the increased vulnerability of the victims of the Bhopal Gas tragedy to the disease because of the damage to their lungs and other organs, they have asked the court to direct the Madhya Pradesh government to develop and update clinical protocols for them in other hospitals as well.

Activists working with the gas tragedy victims said they had written to everyone concerned — from the Union health minister to Principal Secretary of Health, Madhya Pradesh — cautioning that these victims could be more vulnerable to COVID-19 since their immunity was already compromised and BMHRC was their sole refuge.

Their claimed turned out real when 55-year-old Naresh Khatik died due to COVID-19 pandemic.

“It is baffling. We have more than 70 COVID-19 patients in Bhopal and nobody has yet been admitted to BMHRC. They could have easily created an isolation ward on the first floor of the hospital with separate entry and exit. There was absolutely no reason to take over the hospital and stop treatment of gas tragedy victims,” said Rachna Dhingra, co-convener of Bhopal Group for Information & Action (BGIA),

When contacted, Arun Rathore, spokesperson for Bhopal district administration, said that guidelines issued in a wake of COVID-19 pandemic by the government are being followed.

“What has been done is in the greater interest of people of Bhopal. As far as this patient is concerned, whatever instructions are received from the government regarding reimbursement of medical expenses or relief to his family will be followed,” he said.

Despite several attempts, Director of the BMHRC Prabha Desikan could not be contacted. While, the Public Relation Officer of the BMHRC Mazhar Ullah refused to make any comment saying, ‘The Director is the sole authority of make comment on this.’

PRESS RELEASE: Birth Anniversay of Irom Sharmila was observed with Hunger Strike and Demand for Repe...
India - Uttar Pradesh number one in awarding death penalties
Black Trans Bodies Are Under Attack": Freed Activist CeCe McDonald, Actress Laverne Cox Speak Out
The truth is on our side: Raihana Kappan’s struggle to free her journalist husband, Siddique