Students of the National Law Institute University in Bhopal have been boycotting classes for the past 3 days, demanding resignation of the institute’s director SS Singh for passing a sexist remark against their colleague. Students of the National Law Institute University in Bhopal have been boycotting classes for the past 3 days, demanding resignation of the institute’s director SS Singh.

Another student said that while there were many issues on the campus, the immediate trigger for the agitation was a sexist remark by the director against a student.

Talking to India Today, the student against whom these remarks were allegedly passed said, “I was called inside the director’s room. I didn’t even know why I was called. There were four other faculty members inside the room, but no lady teacher when the director cast aspersions on my character.”

Director SS Singh has denied all the charges levelled by students against him. “I have served this institute for over 9 years. Students are levelling these charges at the behest of someone who wants me to go. As far as their genuine demands are concerned, we are ready to talk”, he said.

The agitating students are not willing to call off their agitation until the director leaves.

As a routine activity, when students approach the director with any grievances, they are turned down and termed baseless.

In furtherance of the above, we would like to highlight some of such instances:

Not only has the policy not been implemented, the results have been declared merely 10 days before the commencement of the repeat/re-repeat/improvement examinations. It is to be noted that this is not the first instance of such delay. Even prior to the release of this notification, it has been the practice of the administration to declare results inordinately late.

The delay with respect to the results of repeats/re-repeats/improvement/re-evaluation examinations is even graver. There have been multiple instances of these results being declared at least a year after students appeared for the same. Students have expressed their grievances with regard to the professors’ failures to complete the subject syllabus before the examination. For instance, the Alternative Dispute Resolution (ADR) course was left mid-way for the Batch of 2019 with students having to answers questions on concepts and cases that were not taught in class in their examination.

Furthermore, there have been multiple instances of different teachers following varied curricula while teaching the same subject. The discrepancies in the teaching methods consequently lead to uncertain curricula and out-of- syllabus questions in the repeat and re-repeat examinations.

Contrary to accepted practice in other Universities, teachers do not prepare model answers or a standardized marking scheme before correcting papers. In light of the continuous revisions to the paper pattern and the total marks awarded per answer/paper, it is imperative for the teachers to take into considerations such changes in order to avoid erroneous correction.

Of particular mention is the correction of the CrPC-I papers of the Batch of 2019. Not only were several students arbitrarily failed in the examination, but the concerned Professor was unable to justify the reason for his manner of marking.

Teachers have been found increasing marks under influence of, or due to personal bias for, some students, which is completely arbitrary and unfair to other students.

Reevaluation is done by the same teacher who evaluated the copy in the first instance. This completely negates the purpose of reevaluation, as the students are not provided an independent evaluation of their answer sheets.

This is inadequate in light of the fact that the teachers are reluctant to revise correction errors themselves and insist on the students applying for re-evaluation in case of any grievance. Further, the re-evaluation fee of Rs. 1000 per subject is exorbitant.

As per the present schedule, the University library is open till only 9 PM. This restriction on the accessibility of essential resources to students act as a major hindrance in their preparation for various co-curricular activities.

As had been prevalent in various other National Law Universities, the library is kept open for long hours so as to enable the students to effectively use the resources.

Further, during Saturday/Sunday, the library is open only till 6 PM, which is not only against students’ interest, but is also unreasonable. 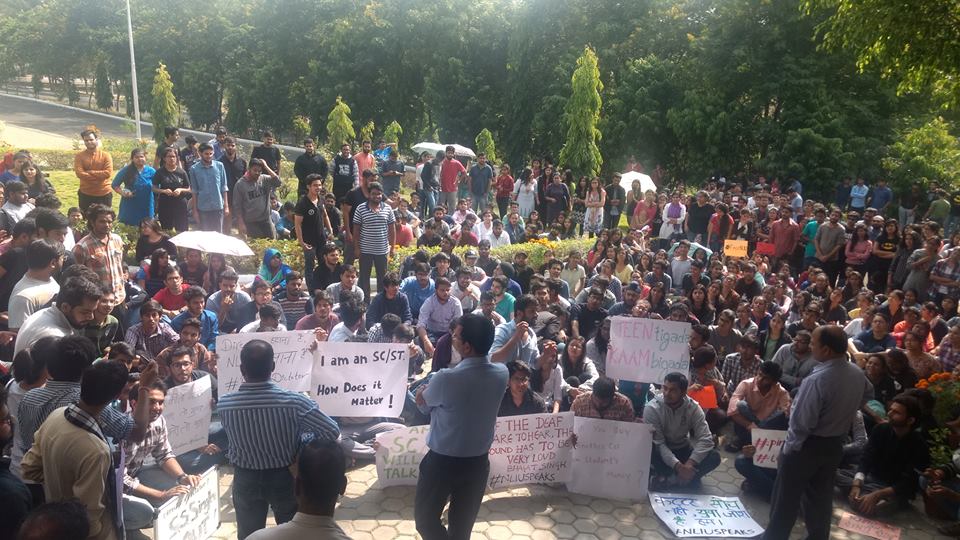 Several students have faced lack of cooperation from the administration while requesting for academic leave for strictly medical purposes, even in special and extreme circumstances. There is absolutely no provision for addressing genuine medical situations of students.

A few incidents are highlighted below, along with the administrative responses

A student had injured her vertebral column, and the injury was so severe that she was advised immediate and complete bedrest for a minimum of 3 months, or run the risk of paralysis.

Her parents approached the administration with MRI reports and doctors’ statements to this effect, with a request to be granted the minimum threshold of attendance required to be able to sit for the exams, so that she would not have to repeat the whole year.

The parents faced outright rejection and dismissal of their requests from the administration, with reasons like ‘these reports could be fake’ and ‘bar council rules require this much attendance’ being given, apart from several inappropriate remarks being made.

Their next request of allowing a stretcher in the classroom on which the student could lie down and attend classes was denied on the grounds that it would ‘distract the teachers’.

The next request of shifting the classroom downstairs or being allowed to use the elevator already installed in the Academic Block – II was also denied, first by the Registrar, then by the Proctor. Ultimately the student had to attend all the classes half-sitting, half-standing, and write both mid-terms and end-terms the same way.

2.         Denial of Leave despite Multiple Fractures and Dislocations

A student who had suffered from multiple facial fractures, three fractures and a wrist dislocation had to face immense hostility from the University administration. His application for medical leave was rejected. Even though doctors had advised strict bed rest, he had to attend several days of classes just to ensure that his attendance crosses the 70% threshold failing which the threat of repeating the whole year loomed over him. Apart from having to attend these classes in a heavily sedated state, he also had to endure several traumatic taunts such as ‘students have attended classes in wheelchairs and would do so even on stretchers’.

3.         Denial of Leave despite Student falling from a Height of Two Floors

A student who had fallen from 2 floors above the ground and sustained numerous back injuries which left him bedridden for weeks. Despite this, he had to attend classes with a walking assistance machine.

In spite of the doctors advising him a month of strict bed rest, he had to still attend classes in excruciating pain, again just to ensure that the threshold of 70% attendance requirement would be crossed. Such unwanted exertions also led to a very prolonged recovery period, as his request for medical leave was dismissed.

The University administration has been consistently refusing the suggestion of the student body that genuine medical grievances should be considered for attendance purposes on the ground that the Bar Council Rules for legal education do not permit such a policy. However, Bar Council Rules do not prohibit any such policy, since several other law universities, who also fall under its purview, have a simple and effective policy of medical leave.

The students believe that a Medical Board, comprising of professionals of the University’s choice be set up, who can review and check the authenticity of requests for medical leave for every individual on a case-by-case basis. Only valid cases should be granted such academic leave.

As a law university, it is even more imperative for the University to ensure that the incidents of the nature being alleged are dealt with in a fair and transparent manner in accordance with law and not swept under the carpet. We also understand that despite several protests in the past by the student community demanding accountability of the administration and safety inside the campus, effective steps have not been taken to address these issues apart from setting up committees.

Release Immediately Comrade Alik Chakravarthy, Leader of Anti-Power Grid Movement at Bhangar
Is a Farcical Probe Being Done into the Gorakhpur Tragedy?
With Roe Overturned, What Comes Next for Abortion Rights?
Ever wondered why Novartis and Roche do not compete ? #Pharma