BHU and its Sordid History Of Sexual Violence #Vaw 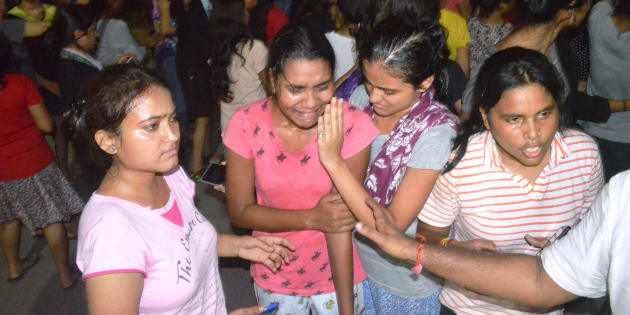 HINDUSTAN TIMES VIA GETTY IMAGES
An injured student writhing in pain after police allegedly beat them up during clashes between the students and police at Banaras Hindu University on September 23, 2017.

Shutting down the university by prolonging Dussehra holidays might offer some immediate respite to the powers that be at Banaras Hindu University (BHU), in the immediate aftermath of the student unrest, angry protests and violence that broke out on campus after a brazen incident of sexual harassment came to light on Thursday, 21 September. It is unlikely to make the matter go away.

As details about the incident emerge, it is becoming increasingly clear that the students’ outrage is not over one isolated incident — anger has been simmering in them for a long time over the pitiable state of security measures to ensure women’s safety on the campus and the blasé attitude with which past cases have been dealt with.

BHU has a sordid history of sexual violence, especially in the last couple of years. Ever since the appointment of current vice-chancellor, GC Tripathi, in 2014, the university has been a hotbed for protests over gender-based discrimination. 2016 was among the most turbulent and violent years in the 101-year-old university’s history.

In January 2016, a research scholar at BHU was allegedly repeatedly raped by her senior.

In April, clashes between students of the science and arts faculties ended in bullets being fired and at least 10 students injured, according to a twocircles.net report.

In August 2016, a 19-year-old male student was allegedly gangraped by five men in a moving car with the university logo. After raping him in turns, the men dumped him near the agricultural department of the university. Reportedly, neither the patrolling vehicle of the proctorial board, nor the security staff bothered to stop the rapists’ car as it drove around the campus for a long time.

BHU’s vice chancellor, even justified the university’s silence on the matter by saying, “So many incidents happen every day, we don’t give statements on everything,”

When the victim contacted the police to file a complaint, he was discouraged to do so. When he insisted, the case was finally registered, but a full four days after he first approached the police for help. The rape victim also claims that he was forced to go through a second medical examination after the incident, despite the doctors confirming rape in the first test. The victim, his family, and friends have alleged that the university administration and police were trying to hush up the matter and in the interim three days, tried their hardest to intimidate the victim to drop the case.

According to a report in the Newslaundry, the police fully intended to bury the case to suppress the controversy that would inevitably emerge if it became public knowledge, but were forced to take action when local media reported on the incident. Even though the victim identified one of his attackers as one of the lab attendants in the Institute of Medical Sciences in BHU, an arrest was made only 18 days later in the case. BHU’s vice chancellor, GC Tripathi even justified the university’s silence on the matter by saying, “So many incidents happen every day, we don’t give statements on everything,”

In January this year, a women’s cell and helpline were announced by the VC after widespread protests against sexual harassment by students. However, just two days later, a drunken police constable allegedly harassed two female students of IIT-BHU. Reportedly, no action was taken against him.

The university has seen scores of violent incidents in the last few years, and that there are waves of violence and vandalism on campus.

Not just students, teachers too have complained of being sexually harassed at BHU. A member of the Proctorial Board, Professor Shraddha Singh of the Hindi Department, told 101reporters.com, “Let alone female students, even teachers like me get eve-teased in the classroom, while driving or just moving about in the campus.”

Another professor, Mahesh Prasad Ahirwar, said that the university has seen scores of violent incidents in the last few years, and that there are waves of violence and vandalism on campus. “Check records of the Proctorial Office and you will know everything,” he said.

Cases of sexual harassment notwithstanding, BHU is a terrible place for its women students even otherwise.

It is no secret that Tripathi is an RSS man. He takes immense pride in his 40-year-long association with RSS and is a staunch believer in the Sangh’s ridiculously conservative ideologies.

In March this year, he stirred up a controversy when students alleged that he was present at an election rally alongside PM Narendra Modi (under central government employee rules, a government servant is barred from showing any allegiance to a political party) Although questionable, his open affiliation to the RSS dodges this rule because the RSS insists that it is a ‘cultural organisation’, despite its extreme influence on BJP and its members’ closeness with its top brass. Tripathi has also gone so far as to unashamedly say, “When the Indian government itself is of the RSS, there is nothing wrong in establishing an RSS shakha in BHU.”

Female students are not allowed to use mobile phones after 10pm because Tripathi believes that “girls who study in the night are immoral.”

The administration has imposed many bizarre and absurd restrictions on female studentsin the past, clearly showing how far it was willing to go to toe the RSS’ conservative line.

Tripathi believes that it is against Indian values when boys and girls hang out together. Earlier this year, the university distributed a circular among students notifying them that if anyone was found celebrating Valentine’s Day, they would be subjected to “category-A punishment,” which is just a nicer way of saying they would be suspended.

When students demanded a cyber library, the administration refused saying that an Internet-enabled library would be used by the students to watch pornography and that there was no need for a a cyber library because students did not need to study anything outside of the syllabus.

Female students are not allowed to use mobile phones after 10 pm because Tripathi believes that “girls who study in the night are immoral.”A direct result of this belief is that women students cannot access the university’s 24×7 library at night. Nor can they avail the bus facility provided to all students, at night. Last year, women students were also made to sign affidavits stating that they would not indulge in protests or agitations, which is every citizen’s constitutional right. They are also not allowed to participate in any socio-cultural activities outside the campus.

Tripathi also believes that “consumption of non-vegetarian food makes women impure according to the Malviya values”.

The discrimination is not just outside the hostel. While the men’s hostel is allowed to serve residents meat, women students are forced to follow vegetarianism. Tripathi also believes that “consumption of non-vegetarian food makes women impure according to the Malviya values”. Women have to abide by a strict 8 pm curfew in the name of safety, while men can roam around freely in the campus at all hours. Skin show and short clothes are frowned upon by an administration quick to reproach and admonish its female students.

With an administration helmed by an openly sexist man who governs the institution with an iron hand and an almost sycophantic belief in the Sangh parivar’s ideologies, it is only natural that sooner or later, the anger festering among students was going to boil and spill over.

India: Drop false charges against those protesting against Vedanta’s land acquisition in Orissa and...
Prabhat Patnaik on Affirmative Action And The “Efficiency Argument”
Why we must support Palestinian families resisting eviction in Sheikh Jarrah
India victims of 1984 Bhopal gas tragedy dying of coronavirus